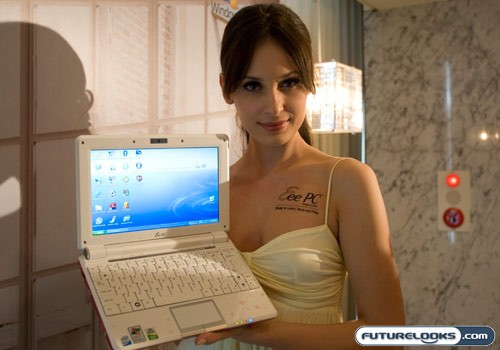 When the first Asus Eee PC was announced last year, it turned a lot of heads. The little seven-inch wonder carved out a whole new niche in the market, fitting somewhere in between a QWERTY-packing PDA and a full-sized notebook computer. Yes, I realize that the UMPC guys were trying to occupy the same segment with devices like the Samsung Q1 Ultra, but these things never did catch on quite as well as the very affordable Eee PC.

Following the success of the original Eee PC, Asus officially expanded the lineup by introducing no fewer than three new Eee PC subnotebooks at COMPUTEX Taipei 2008. They held an official launch event on the afternoon of June 3, 2008, introducing the world to a new generation of Eee PCs, all of which are bigger, badder, and more powerful than ever. They also appear to be much more energy efficient, because Asus has managed to bump the battery life up to nearly the eight hour range by using something called the Super Hybrid Engine. You’ll be hard-pressed to get that kind of life out of a full-sized notebook. I guess the Eee PC is pretty green.

Ushering in the Era of Atom 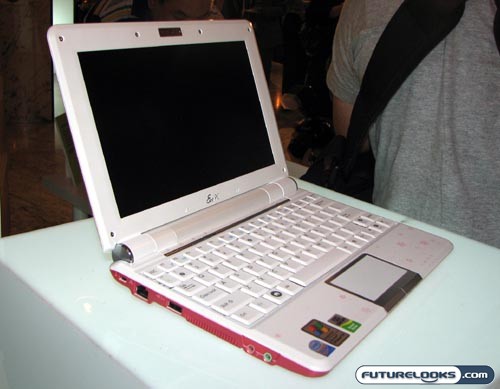 It had been rumored for months that Asus would be creating an Eee PC powered by the hotly anticipated Intel Atom processor. Those rumors finally came to fruition at Computex Taipei where Asus CEO Jerry Shen proudly showed off no fewer than three Atom-powered Eee PCs.

The Asus Eee PC 901 is essentially using the chassis from the Eee PC 900 (which, in turn, is a modified version of the one from the 701) and it’s all over that Atom goodness. Previous units were powered by Intel Celeron and Intel Mobile processors. Atom is a line of x86 microprocessors that have been designed for the 45nm CMOS process. Right from the get-go, it was intended for use with UMPCs, smartphones, and devices like the Eee PC. It’s relatively low power and that explains, in part, the improvement of battery life on the Eee. The Atom-powered Eee PC 901 is going to be a hot ticket for sure. 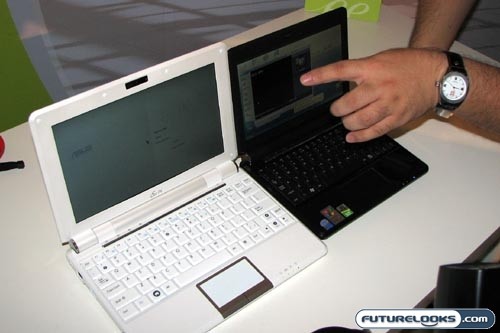 The other two notebooks that are getting loaded with Intel Atom processors are the Eee PC 1000 and the Eee PC 1000H. Along with the introduction of Atom, these two units also boast a first for the Eee PC line: large 10-inch displays. The original Eee PC had a screen that was only seven-inches and Asus received feedback from the community that they wanted a bigger screen. The Eee PC 1000 and 1000H address this very concern. And it’s not just the screen that’s bigger.