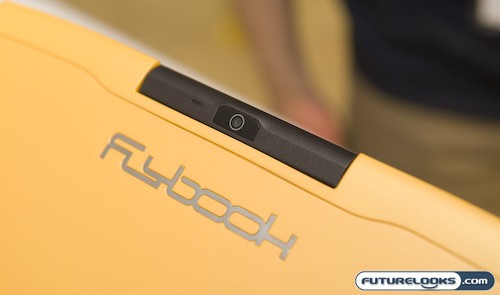 Last year, the incredibly compact Asus Eee PC was introduced to the world and it seemed like everyone fell in love with the form factor. The ultra-portability of the little laptop made it really easy for bloggers to update their sites on the fly and for regular people to stay connected to the web everywhere they went.

For this year’s COMPUTEX Taipei, it was stated at the opening press conference that one of the major themes would be the compact notebook. From the Acer Aspire One to the MSI Wind, it seems like all the big players are coming out with a subnotebook of some kind. The thing was the vast majority of these offerings, however, is that they are designed to be secondary computers. They’re designed to supplement your main laptop, rather than replace it. The power just isn’t there.

Dialogue Technology Corporation has a wholly different philosophy. While its Flybook range of laptops can be just as small as something like the Eee PC, these bad boys are actually full computers. In fact, the Flybook reps say that their little laptops are just as powerful as a 3GHz desktop computer. The Flybook is not a supplement to your main computer; it becomes your main computer. 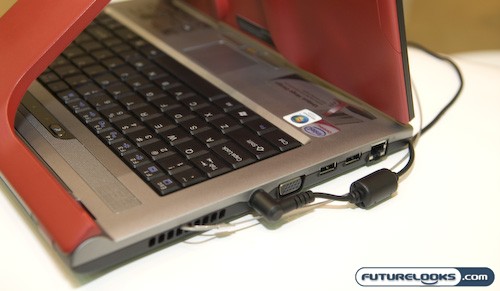 Much like Jerry Shen of Asus, Flybook welcomes the competition. They thrive on it. By having more subnotebooks on the market, more people will become aware of the smaller form factor and more people will fall in love with it. Flybook’s strategy, in this way, is to allow people to buy sub-$1000 laptops from HP, Everex, Gigabyte, and so on. They’ll enjoy the form factor, but they’ll be disappointed with the performance.

According to Flybook, many of these people who buy the Eee PC, for instance, will upgrade to a Flybook in under a year. You still get the convenience and portability of the cheaper subnotebooks, but you get the “real” performance of a “real” computer. From PhotoShop to Dreamweaver, the Flybook can handle it all. 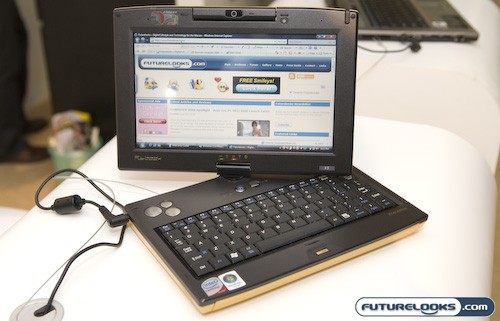 Although it may have a similar footprint to some of the small form factor notebooks out there, the Flybook V5 actually offers a heck of lot more for the user. For starters, it’s not just a laptop. The 8.9-inch wide-view LTPS TFT LCD can rotate 180 degrees to provide a Tablet PC experience. All you have to do is twist and fold to convert from a regular notebook form factor to a Tablet PC. The display is a touchscreen, obviously, for this purpose. 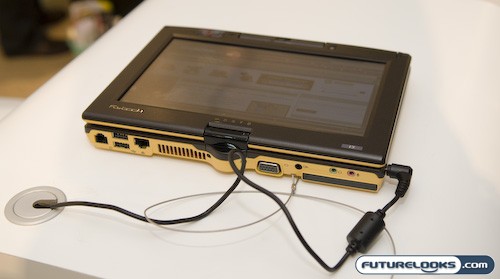 There are a few other subnotebooks that offer this kind of functionality as well, but none have a spec sheet that is nearly as impressive as the Flybook V5. This little laptop gets powered by an Intel Core 2 Duo ULV U7600 processor (1.2GHz), 2.0GB of SO-DIMM DDR2 RAM (upgradable to 4GB), an 80GB 1.8-inch hard drive, biometric fingerprint authentication system with data encryption, and an integrated 1.3 megapixel camera that can rotate 215 degrees.