Yesterday, Canada was introduced to the ASUS Eee PC; an ultra mobile notebook computer that runs a custom Linux OS and uses a solid state flash drive (SSD) as its primary storage medium. The unit features a 7 inch screen and a built in webcam including wireless internet connectivity. 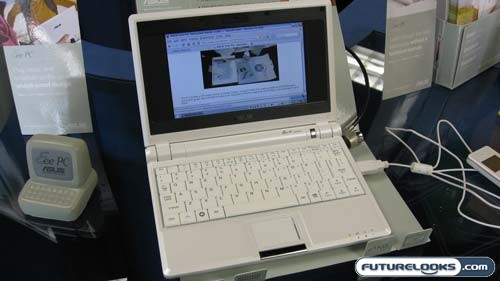 Because the ASUS Eee PC has no moving parts, it’s also inherently shock proof. A solid state hard drive and a custom Intel CPU and chipset sips power, allowing the Eee PC to boast anywhere between 2.8 hrs to 3.5 hrs of battery life depending on the model.

The EeePC will launch in Canada in the following three flavours…

Missing from this list is the upper end EeePC 8G which features an upgrade of an 8GB Solid State Drive and 1 GB of DDR2 RAM. We’re not quite sure when this will show up but based on specs alone, this might be the unit that will feature the Windows XP OS installed. The Eee PC 4G will be what we’ll be checking out today, while the 4G Surf and 2 G will be available by the end of the month.

As of 5:30 PM yesterday, Canada totally sold out so it looks like anyone else who wants one will have to wait. At least you have the rest of this preview to tied you over. At $399 CDN, it’s definitely a better deal than that iPhone Shizzle.

You can tell people how light and small something is, but you never really get the feel till you pick it up. This thing is LIGHT and it’s rather cute, which should appeal to a wide audience. In fact, it’s less than two lbs or 0.92 kg’s if you’re in Canada. 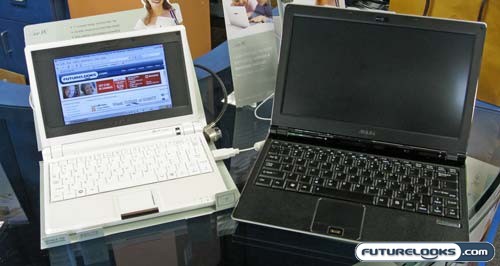 I parked the Eee PC beside my already thin and light 11.1 inch screened ASUS U1F. Now, the U1F is a tiny notebook, but as shown in the picture above, the Eee PC is a magnitude smaller. 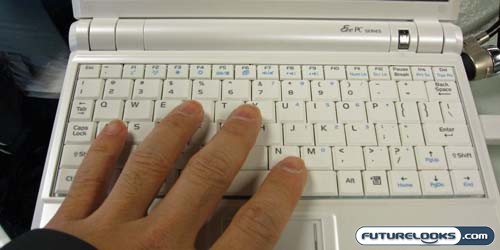 As with all small laptops and notebooks, the keyboard seems to be a fine balance between function and fat fingers. The Eee PC manages to fit all necessary keys on the keyboard, however, if you have bigger than normal digits, this won’t be for you. 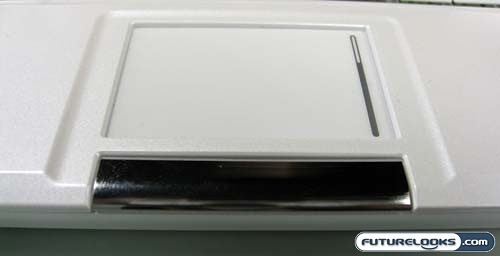 The touchpad does away with the other button and goes “ala MAC”. The single click might throw some two button mouse users off for the first little bit, but you get over it pretty quick. I don’t know if it was the sample I was playing with or not, but I found the button to be quite difficult to click. It was rather stiff and didn’t always click for me.