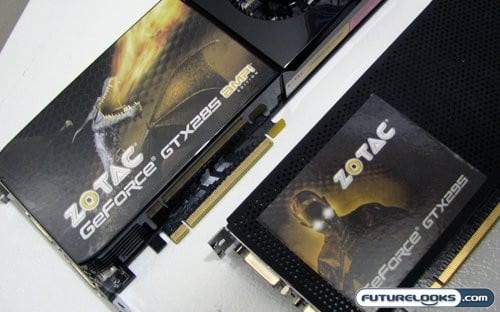 In the two horse race of performance video cards, things have been pretty cyclical. One company would release a new whiz-bang card, then the other company would release their response. This was followed by a similar cycle of tweaked versions of the same cards. In the last two release cycles those tweaks came in the form of dual GPU cards, which sandwiched two cards into one package. The most recent cycle left off with ATI releasing their dual GPU solution in the form of the Radeon HD 4870 X2, and NVIDIA responding with…nothing. NVIDIA finally turned their nothing into something by releasing both a dual GPU solution and a tweaked single GPU card, and they are bringing vendors like ZOTAC along for the ride. 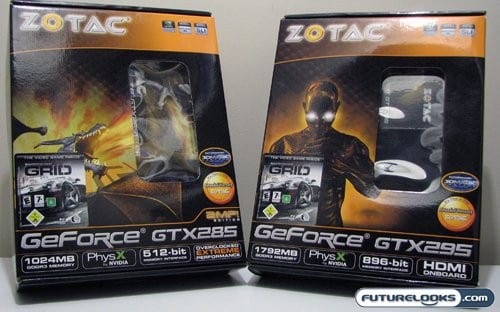 ZOTAC has recently released both a GeForce GTX 285 and a GeForce GTX 295 card, and we’re taking a look at them today. The GTX 295 is a vanilla version, with the same clock speeds and specifications as the NVIDIA reference version. However the GTX 285 card they provided is one of their AMP! Editions, where they crank up the clocks at the factory to provide you with the best performance while still giving you a warranty. I’ll let the comparison below do the rest of the talking. 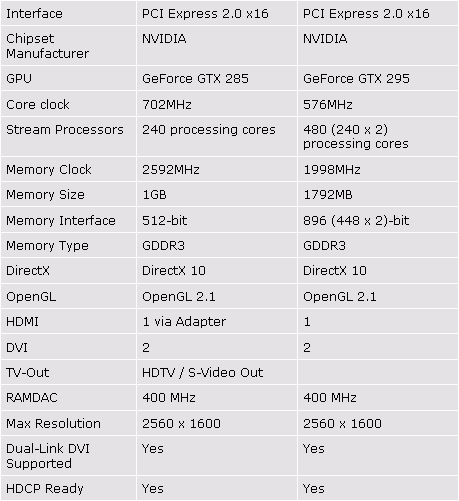 So basically we have a showdown between raw horsepower and multicore finesse. I think we know where this will end up, so we’ll have to see how they both stack up against our previously reviewed GeForce GTX 200 series cards. If you want more details on the cards themselves, you can check out the product home page for both the GeForce GTX 285 AMP! Edition and the GeForce GTX 295. For everyone else, let’s get this show on the road.

As for pricing, these are hot-off-the-fab video cards so I wouldn’t expect any miraculous deals. The GeForce GTX 285 AMP! Edition can be had for $399 USD on average, and the GeForce GTX 295 will set you back $499 USD. These are the typical prices for newly released NVIDIA cards, and I’m sure they will go down in a few months. Still is this price tag justified? Do you get the performance you think you paid for? Well I guess we’ll just have to find out.