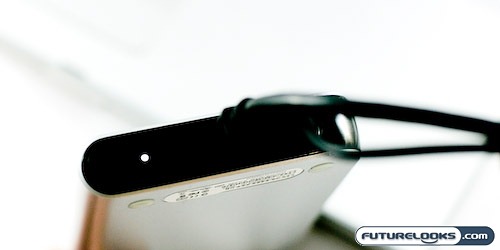 Once you’ve decided whether to use it as a Firewire or a USB drive (current Unibody MacBook owners have no choice but to choose USB 2.0), you just need to slide the cover open, plug it in and it’ll mount on your desktop as a standard Firewire or USB drive.

Although there is software and utilities on the drive, nothing is actually needed to use the Passport Studio.  Just plug it in and you’re ready to go.  The software for Mac is only a little toolbar icon that lets you know about the status of the drive like percentage hard drive space filled.

All tests with the WD My Passport Studio were done on my MacBook Pro (the previous generation without the glossy screen) with a 2.5GHz Intel Core 2 Duo, 4GB 667MHz DDR2 RAM and running the latest updated version of Mac OSX 10.5.5.  The laptop’s own hard drive is a standard 250GB HD formatted as Mac OS Extended (Journaled).

In order to test the drive’s write transfer speed, I copied a folder with 1GB of various files over to the Passport Studio from my MacBook Pro’s hard drive. Here’s what the stop watch said… 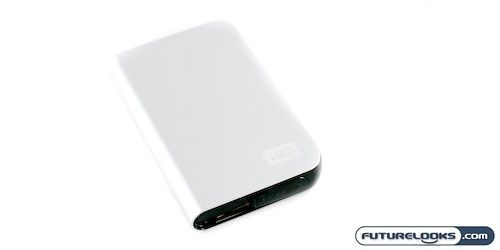 While it certainly won’t matter to a lot of people out there, the My Passport Studio does look rather attractive.  I mean, less isn’t more when it comes to hard drive space but it is in terms of design. Other than perhaps LaCie, not too many manufacturers of products like this actually make them aesthetically pleasing.  It’s a good thing that WD included a little pouch for the unit as well.  I’m sure some time with all your other peripherals couped up in your Booq Bag would scratch it up quite a bit.

I would’ve liked to have seen Firewire 800 support as well as backwards compatibility with Firewire 400. Luckily, Western Digital has answered that call with a new product but clearly Firewire 800 is more of a MacBook Pro thing as none of the other MacBooks have Firewire 800 and the new Unibody MacBooks have no Firewire ports, just USB 2.0. Hopefully we’ll be able to check out the new version that supports not only Firewire 800 but also has some new Turbo Drivers for Mac that should speed up throughput.

The Western Digital My Passport Studio works well, looks good, has a fantastic warranty and has a couple small touches that set it apart from the competition. Definitely recommended.