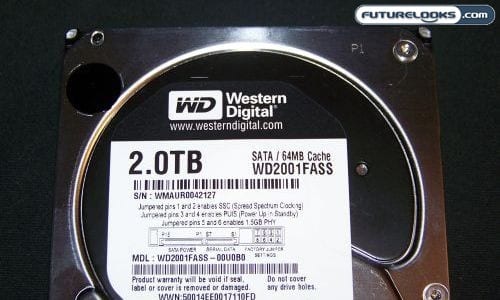 A few months back, Futurelooks took a close look at one of the first 2TB drives to hit the market, the Western Digital’s Caviar Green 2.0TB SATA2 Hard Drive. A couple of the features that the drive boasted was its massive 2.0 TeraByte capacity while still enjoying respectable low level power consumption. Better still, its performance was still excellent despite being a low power drive with super dense platters.

As with most of WD’s hard drive product line, they have drives tuned for both high performance like the Velociraptor or for size and lower power consumption like the aforementioned Green drives. Then somewhere in between there are the hard drives tuned for a little bit of both because hell raising administrators demand it. That series is called the Black Edition and today we take a look at the largest in the line called Western Digital Caviar Black 2.0TB (WD2001FASS). 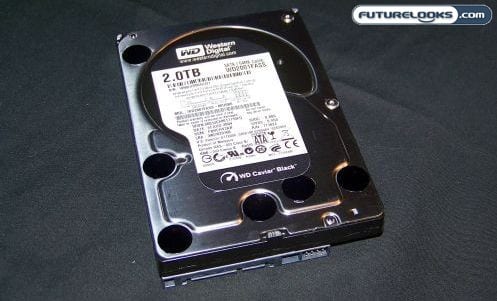 While it may not seem like much is going into SATA technology, Futurelooks Summer tour of WD’s new facilities in California revealed that there was much going on. Some of the new features revealed to us at the time include Stable Trac, Dual Actuator Technology, Dual Processors, and what they’re calling Colossal 64MB Cache. All of these are in the drive that we’re going to look at today.

Stable Trac simply reduces vibrations being that the head is secured at both ends. Early hard drives didn’t offer this which resulted in some pretty erratic vibrations especially in server storage arrays. We can all appreciate this feature. However, things get even better.

The Dual Actuator technology is a nice little advancement given to the head which helps it position itself by slightly tilting to the left and right requiring less revolutions as it’s able to fine tune itself to find what it needs on the disk. Less revolutions can help prolong the drive’s life span. This is likely why Western Digital as decided to stand behind it with a beefy 5 year warranty.

In short, the Caviar Black is a 2 Terabyte monster performance hard drive offering the latest drive advancements along with its massive 64MB Cache. This is the most cache offered to date on their desktop storage drives. It also boasts a 7200 RPM spindle speed and comes in sizes from 500GBs to 2TBs (as tested) though the 2TB is special among its siblings.

In order to give this drive a good thrashing, we assembled the following components into a test bench to test this monster of a drive.

Windows Vista 64-bit was the OS of choice used in our testing while software such as HD Tune Pro and Crystal Mark were also recruited.

HD Tune Pro starts off our chosen benchmarks so that the results could be compared to the Caviar Green 2TB Hard Drive which was reviewed earlier in the year. Crystal Disk Benchmark was also chosen because it adds a nice little blend of Sequential and Random block testing, especially small block testing. It should reveal any performance improvements gained from the Caviar series’ features.

To recap, power consumption of the WD Caviar Green 2TB drive in testing revealed it consumed an impressively low 16 Watts versus its Seagate nemesis, the 7200.11 1TB which consumed 25 Watts. To further apply some perspective, my aging lower capacity 500GB Seagate drives require 21.5 Watts at load. 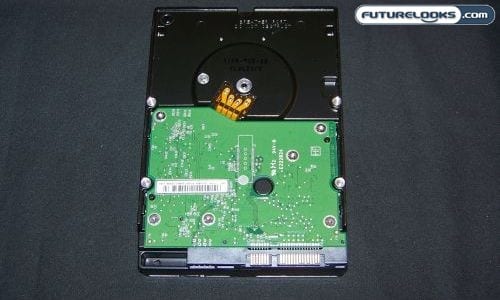 Giving the Caviar Black 2TB a spin, the four 500GB internal platters needed only 18 Watts to move a 10GB media file. The test was performed three times and this was the most power consumed in all three tests. One thing to note is that it didn’t consume this at all times. Sometimes, it was a couple watts less. Now, this may not be much of concern to desktop users who may only need three or four, but storage racks housing a couple dozen hard drives or more all add up to some serious wattage. Power costs money and when you can save a few hundred watts over several arrays, you do save money on a the lower power bill.

In the noise level department, we found the drive surprisingly quiet compared to its rated 29 to 33 dBA. Where were these things tested, in a hollow can? I didn’t record any noise levels above 19 dBA even right up close. Overall, pretty good for a 7200 RPM drive.