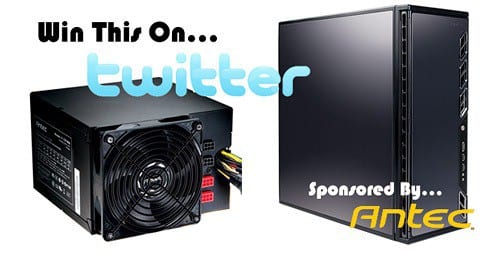 We recently had the pleasure of reviewing a most savory combination of case and power supply made up of Antec’s P183 enclosure and Antec’s specially formulated CP-850 power supply. The case is the stuff of legends as it is the direct descendant of the iconic Antec P180. It was the case to beat at the time and nearly every manufacturer pulled some sort of “inspiration” from it for one of their own designs. Next we have Antec’s CP-850 Power Supply. The engineers, who can never leave well enough alone, took an innocent power supply back to their mad labs and reworked it into the image of their patron saint of power supplies…which we believe is still “The Stig”.

The combination of the two brought even our own Hardware Editor Eric Garay into a deep moment of silence and reflection as he awarded it Futurelooks’ highest honor: Our coveted Editors’ Choice Award in our latest review. As our loyal readers know, we don’t give that award away like candy and we certainly don’t think that everything “kicks ass” unless it actually does and we think that the combination of the Antec P183 and the CP-850 PSU really do.

Since it’s the holidays, the Futurelooks team found a warm feeling in their hearts that started growing till it hit our friends at Antec upside the head. Now they too have the holiday fuzzies and we’ve teamed up with them to spread holiday cheer by giving away this legendary combination!

We’ve once again called upon the powers of our “Twitters” and have constructed an easy to enter contest that will have you qualified in no time.

Here’s how to win it…

2. Next, you’re going to need to tweet the following phrase…

I entered to win an Antec P183 and CP-850 combo courtesy of @futurelooks and @AntecInc. Enter now! http://ow.ly/KQMs #FLAntecContest

This contest is open to anyone in the WORLD! That’s right! This is the first time we’ve done an INTERNATIONAL TweetAway and it’s all because you cared enough to let your voices be heard! As long as you keep coming back, we’ll keep pushing to make sure that we have a contest once in a while that serves the planet earth. The only place that we cannot ship to is Quebec, Canada. Go figure eh?

There is only one entry per user. Multiple tweets are great, but re-tweeting the same phrase over and over again just clogs up the Twittersphere so try to use more creative methods to get the word out. Multiple entries from the same user using different twitter accounts will be disqualified. You must also stay followed to both @AntecInc and @futurelooks at least till the winner is announced. We recommend you stay followed to us indefinitely because this is just the start of a series of many excellent giveaways at Futurelooks!

The contest runs from Thursday, December 10, 2009 till Midnight PST on December 31, 2009. The winner will be randomly drawn from all qualifying entries and announced the following Monday on January 4th, 2010. What a great way to start off the New Year with a fantastic prize?