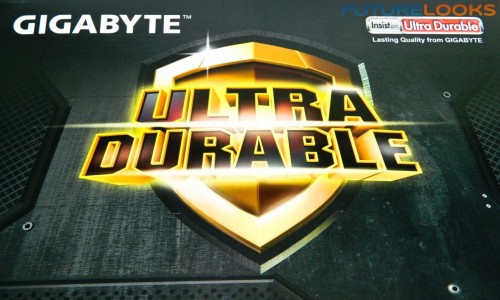 With Intel’s Next Generation chipset just around the corner, it’s time to give you folks a quick look at what’s coming down the pipe. A little while ago, MSI leaked their line-up, and now we’ve got a new board from GIGABYTE called the GA-Z97X-UD5H. One of the newest features of this board is SATA Express, which doubles up PCI Express lanes to increase bandwidth to SSDs. This feature alone is worth its weight in gold, especially for those who are regularly buried in large amounts of data and need to move it quickly.

While we aren’t allowed to provide any benchmarks or go in to new chipset specifics just yet, we can give you a taste of what might be, one of the higher performance, bang-for-buck motherboards, when Intel’s Next Generation chipset launches. The new GIGABYTE GA-Z97X-UD5H gives you updated features, and tweaks. 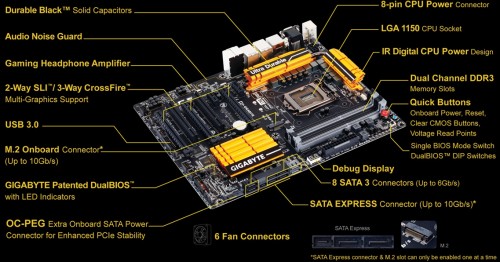 Higher performance SSDs are on the way which offer much higher bandwidth. And that’s why this new feature exists. Even if you don’t have one of those higher performance SSDs today, users will appreciate the added bandwidth that should give current SSDs the maximum capable performance. I haven’t been able to confirm if firmware updates can give current SSDs more performance as of yet. Still, this will help push current generation pricing down, resulting in pricing for SSDs that will finally make them affordable for all.

Even though this is a new feature to motherboards in this generation, it was discussed at the last Intel Developer Forum, mainly because engineers knew that standard PCIE and AHCI support was maxed out for SSDs. This new feature pairs the PCI Express lanes, providing a lot more bandwidth. Future SATA Express implementations will undoubtedly involve new controllers and chipsets to better manage PCI Express lanes and push bandwidth even higher. You can bet data centers and server administrators are drooling for what’s coming next.

A Closer Look at the GA-Z97X-UD5H Motherboard 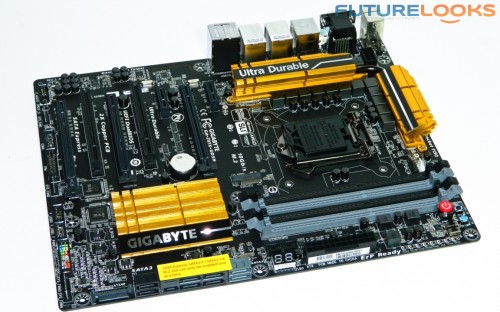 The GIGABYTE GA-Z97X-UD5H is an ATX form factor board, and borrows from its Z87 predecessor in terms of cosmetics, which includes the yellow/gold colors. However, it looks a bit better this time. There’s plenty of room around the CPU socket for even the largest, high end CPU coolers. It still uses the LGA1150 socket, which means that your existing CPUs from that socket should be compatible as well. 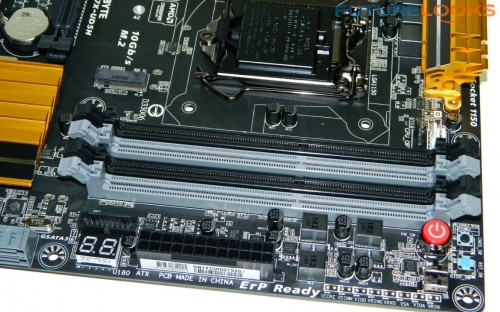 The board continues to offer users onboard controls, just in case your board isn’t in a conventional computer enclosure. There’s an unmistakable red power button, light blue reset button, and black CMOS reset button. Next to those are the Single and Dual BIOS dip switches. These will give users some extra ability for tweaking to reach some nice overclocks. Next to those are the voltage leads if you feel the epic need to zero in voltages for some insane overclocks.

The only thing that could cause an issue is the proximity of the two bios and system reset switches. They should be a bit further apart, just in case. 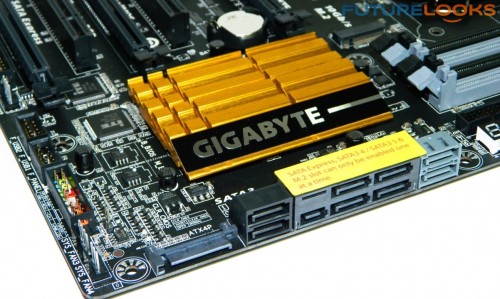 Users get more than enough SATA ports, which total nine. The gray center headers mark your 10GB/s SATA Express ports. The black and light gray ports provide 6GB/s bandwidth. The power connector next to the black SATA is the OC PEG header. If you’re pushing dual Titans or Titan Xs, or any high end power hungry quad GPU architecture, this port lets you add an auxiliary 12 volt power to the PCI Express ports.