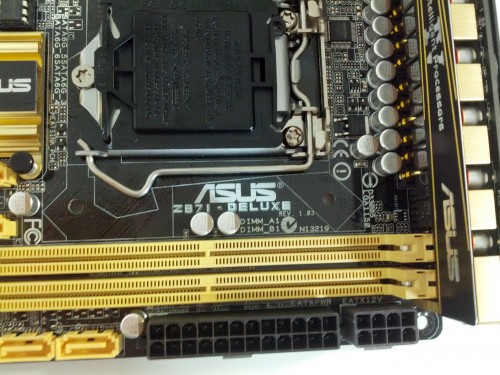 It used to be hard to find a really amazing Mini-ITX board that you would have no qualms about building a great system on. With the launch of the Intel Z77 chipset, we saw some flashes of brilliance from companies such as ASUS and others, who took the form factor up another level. We saw Z77 (versus the lower end H77) on some boards, and that also opened up the door to more effective overclocking on the LGA1155 socket. But ASUS took it even further with the releases of their Z77 chipset based P8Z77-I Deluxe motherboard that went as far as using full sized VRM components attached to a daughter card, that fully unleashed overclocking potential in miniature PCBs.

Today, we get a chance to see just how much further ASUS has taken what they learned from the legendary P8Z77-I Deluxe. We managed to get a hold of an early test sample of the new ASUS Z87I-Deluxe Mini-ITX board and we’re going to give you a sneak peak at what you’ll be seeing in August 2013.

Check out our video preview below in glorious HD…

If you’re having problems viewing the video above, you can view it here on our YouTube Channel.

What We Love (So Far) About The ASUS Z87I-Deluxe…

Obviously, there are many things to love about this Mini-ITX monster. Unfortunately, the new “disco gold” color scheme isn’t one. 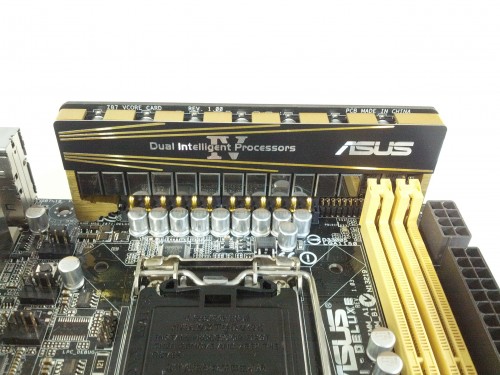 First on our list is the daughter board that independently houses an entire full sized power delivery system. This means that whatever a full sized motherboard can do, this board can do too. Despite its size, it can overclock and perform as well as any full sized motherboard at nearly double its size. So for those of you looking to build a truly portable, yet no compromise, do it all system, this board will meet your requirements.

You’ll also see (to the left) three fan headers (not including the CPU fan) that can be controlled via the ASUS FanExpert2 software. This provides extremely convenient and great control of fans hooked up in a smaller system so that you can fine tune the air flow for optimal cooling and efficiency. This is a major upgrade over previous Mini-ITX boards that include maybe one header plus one more for the CPU fan. It also makes the use of additional fan control devices unnecessary which saves space in more compact builds. 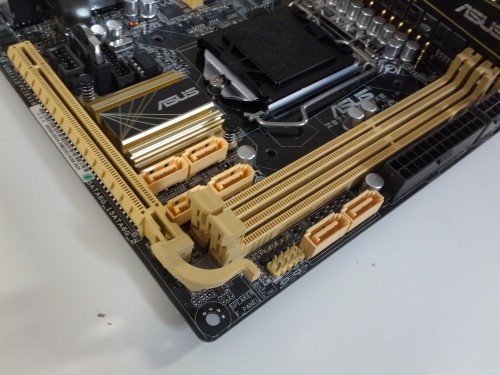 When it comes to building a Mini-ITX system, it’s important that things be designed so that they are readily accessible in cramped quarters. ASUS has done that with the addition of a smartly placed PCI-E slot release lever that can be triggered easily from the bottom corner. For anyone that has nearly torn a piece out of the PCB due to impossible to reach release latches, this will be a welcome addition.

The SATA ports (which are all natively 6Gbps) are also smartly placed at this junction and provides easy access to them when the GPU is removed. And I particularly appreciated the extended Q-Connector cable that the board comes with. Although I’m not 100% sure if this will make it into the final accessory bundle as the one we received was still a fairly early looking piece. Rounded SATA cables would totally put me over the moon.

And as far as setting up the board and getting it going, although we had a great experience with the very quick and snappy UEFI based GUI BIOS, and had no issues with our build with the board, it’s still too early to tell what the final experience will be. 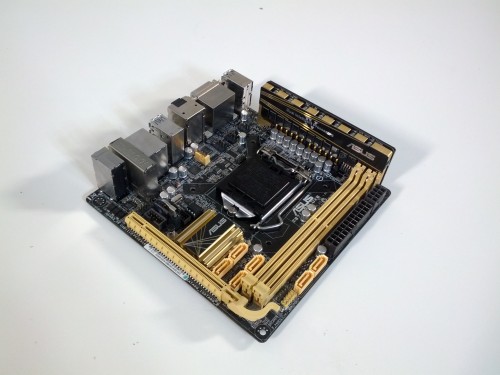 Yes, the board is pretty amazing (except for maybe the color) and the only thing that seems to be holding people back is pricing and availability which seems to be a moving target. However, it does look like the ASUS Z87I-Deluxe will hit the market sometime in Mid-August at this point and pricing is still only a guess, but our intuition is saying around the $179 US MSRP should be right. This makes the board slightly less expensive than its predecessor, the P8Z77-I Deluxe, and leaves room for an ROG edition called the “IMPACT” that should also hit shelves around the same time (but at a substantial premium).

If the price point is a little high, we have heard that ASUS is also prepping a Z87I-PRO edition of the board that retains the awesome digital power delivery system via daughter board, but saves dollars with slightly downgraded networking capabilities. This board currently has 802.11AC and an INTEL NIC. So you’ll still be able to get the same overclocking performance, but without the premium networking bits.

We’ll keep you posted on what’s happening and hopefully ASUS is able to get us a full production ready version for a review very soon.