Looking For A Little Black Box? 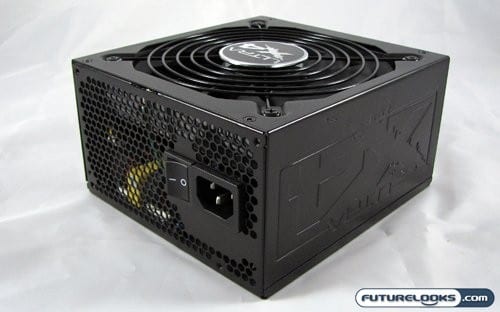 Like it’s predecessor, the Ultra X4 is a single rail design kept cool by a bottom mounted 135mm fan. It’s actually surprisingly small for a high wattage PSU, only being slightly bigger than the aforementioned cooling fan. Short circuit protection, in-rush current protection, and thermal overload cutoff protection are all built in, and work together to protect systems from under voltage, surges, and brown outs.

No explanation is really made as to why Ultra has selected an odd sized fan, instead of the 120mm fans typically found on modern power supplies and cases. However the large fan size combined with the slow moving fan makes for a lot of cooling power with very little noise. The only issue that may pop up is if the fan dies and has to replaced, which would by done by Ultra anyhow as this PSU has an unprecedented lifetime warranty on it.

As for the general construction of the X4, unlike some of their previous products Ultra has gone for an all metal outer shell. Even the mounting plate for the modular cable connectors is metal. The power supply feels very sturdy overall. 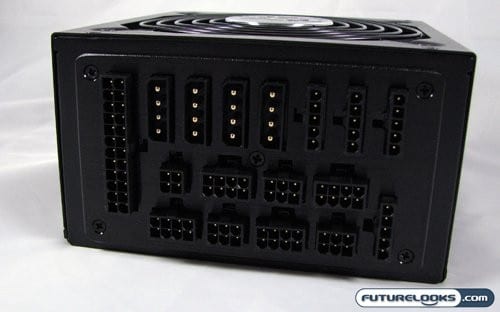 Unlike other modular power supplies, Ultra’s products have always been completely modular. Most other units have the 24-pin and 8-pin motherboard cable permanently mounted, as well as an additional 8-pin cable that is nearly almost extraneous. With Ultra’s design you can eliminate this cable clutter, as well as leave out any other unnecessary cables. 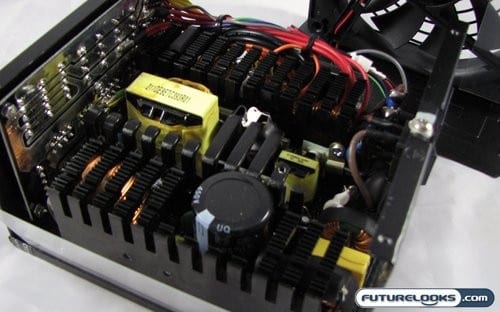 Before moving on to testing, I figured it was a good idea to take apart the Ultra X4 1050W PSU and take a quick look inside. It would appear Ultra has taken the effort to install some fairly good components in this PSU, and configured them in a fashion that should promote performance and stability.

There’s plenty of surface area from the heatsinks to keep things cool. The filtering stage is quite good, and even the black and red wires that feed the PSU precious current are quite thick.

To test the Ultra X4 1050W Power Supply, we hooked it up to the following test rig. These components were selected with the express intent of sucking back as much electricity as is possible in a gaming system, given availability of components.

Our testing was fairly simple in terms of number of programs used, with only OCCT and 3DMark Vantage making a behind-the-scenes appearance. OCCT was the start of the show, being used to place press on the CPU, the PSU, and the whole system. 3DMark was simply used as a representative of gaming performance, and how much power used during such an activity.