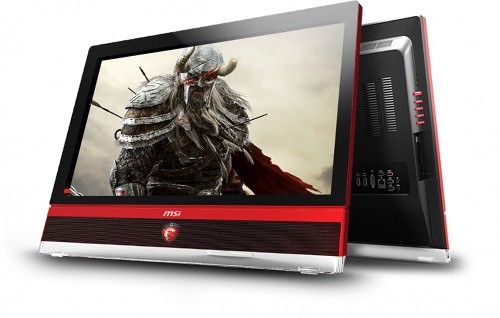 Although most of us would rather build our own gaming rigs, there are folks out there that might have different needs. For example, not everyone has room for a kick ass custom tower, monitor, and a keyboard. As a result, some of us would want ultimate portability and space savings, in a gaming notebook.  But there are some of us in the #PCMasterRace that want something that’s in between. And that’s where MSI’s newly updated All-in-One gaming PCs might fit the bill.

MSI All-in-One Gaming PCs have been around for a little while now, and seem to be popular enough, to stick around, and win awards too (which we did not give them, but we might if they sent us one to check out). One of the signature features of their All-in-One (AiO) systems is the great 27 inch screen, with an anti-glare coasting, and Anti-Flicker technology, making gaming sessions a lot more comfortable. But what makes them even better now, is the upgrade to NVIDIA’s new GTX 900M series graphics cards, based on their new Maxwell architecture, which is said to give up to a 35% increase in 3DMark11 performance. So more or less, low double digit increases in frame rate.

Other features that you may or may not be aware, come on their systems, is the Super RAID dual mSATA SSD RAID 0 capability, the Killer E2200 networking, and Yamaha sound system on-board. So overall, for an All-in-One system, it definitely packs a lot in one box.

The new MSI All-in-One Gaming PCs will be hitting the shelves for $1799.99 USD as early as next week. The full press release, and a couple of extra pics, can be found below.

MSI’s upgraded gaming AIOs feature NVIDIA® GeForce® GTX 900M GPUs, the world’s fastest and most powerful mobile gaming graphics card.  NVIDIAs latest GPU packs the power of a high-end performance graphics card into the silhouette of a mobile unit through a Maxwell™ architecture that delivers up to 35% increase in 3DMark11 performance.

“Gamers crave performance and our new lineup of 27-inch gaming AIOs will leave them breathless,” says Andy Tung, CEO of MSI Pan America.  “The outstanding combination of state-of-the-art components, including NVIDIA’s latest GPU, deliver the most immersive gaming experience available and is guaranteed to outperform any other unit on the market.”

MSI complements the GPU with other cutting-edge components, including Intel Core i7 processor and Super RAID technology for ultra-fast storage speed with dual mSATA SSD’s in RAID 0, Killer E2200 Game Networking for lighting fast and lag-free connectivity, and dual Yamaha speakers and amplifier for an incredible sound experience.  Yamaha speakers feature a built-in full-range monomer and an independent subwoofer to create a 2-way speaker system that pumps out intense explosions, clear footsteps and piercing screams.

About MSI
Founded in 1986, MSI is driven and motivated by customer satisfaction.  A worldwide leader in computer components, MSI boasts a state-of-the-art R&D department, an annual production of motherboards and graphic cards reaching the tens of millions and sales in over 120 countries.  MSI reaches the consumer and commercial markets with a product lineup that includes notebook PCs, All-in-One PCs, servers, IPCs, robotic appliances and vehicle electronics.  MSI’s slogan, Innovation with Style, represents the company’s core value “Innovation” and “Style” and embodies the company’s pursuit of excellence through quality products, user-friendly designs and cutting-edge technology.
[/hide-this-part]