As you’ve likely heard by now, Apple announced a new MacBook at yesterday’s “Spring Forward” event, along with some new revelations about the upcoming Apple Watch and a deal to offer HBO through Apple TV. We had been hoping that Apple would finally offer us a Retina MacBook Air and rumors pointed toward a 12-inch model that would effectively eliminate and find the “Goldilocks” just right size between the existing 11-inch and 13-inch models. Well, we were only partly right.

It is true that the new MacBook rocks a 12-inch Retina display with an effective resolution of 2304 x 1440 pixels. It’s also true that it’s super thin and super light. That’s all good news, except the new 12-inch MacBook is powered by an Intel Core M processor.

Why is this notable? Consider that the MacBook Air (the 11-inch model of which is cheaper than the new 12-inch MacBook) is powered by fifth-generation Intel Core i5 and i7 processors. The Core M processor, on the other hand, fills that gap between tablets and “real” laptops, meaning that the Air is actually more powerful than the new MacBook…. but the Air still lacks a Retina display. What this means is that consumers have to choose between having a more powerful processor with a crappier screen or a less powerful machine with a higher resolution display. It’s kind of a silly trade.

And speaking of silly trades, the new MacBook only has one port: the awesomely reversible USB type-C. And it also charges through that single port, so if you have your MacBook plugged in, you can’t insert a flash drive, connect a peripheral or hook up an external monitor. Indeed, if you want to do any of those things at all, you’ll need to invest in some new accessories. Just getting a standard old USB port, even without the ability to charge your MacBook at the same time, will run you $19. The combo adapter with a standard USB port, an extra USB type-C port for charging, and either HDMI or VGA output will run you $79. 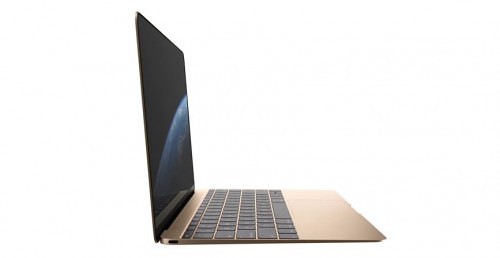 I don’t know about you, but having a Core M processor and needing adapters just for regular USB connectivity makes the new MacBook sound more like a tablet with a non-detachable keyboard and a non-touchscreen display than it sounds like a “real” laptop. Yes, the whole Windows convertible and tablet thing has changed these definitions significantly, but it almost feels like Apple is shooting itself in the foot with this new machine. Or, I could be completely wrong and it’ll be hugely successful. You never know about these sorts of things.

Whatever the case, the new MacBook — which is available in gold and only comes in the 12-inch size — will start at $1299 for the base configuration. Apples to oranges, the Surface Pro 3 sure sounds like a better deal to me. Then again, I’m not in the market for a $10,000 Apple Watch either.