There’s no denying that Antec Soundscience was going for a premium feel with the Rockus 3D. The solid metal construction of the satellite speakers, along with the chrome surrounding section really make this look like a high-end system. 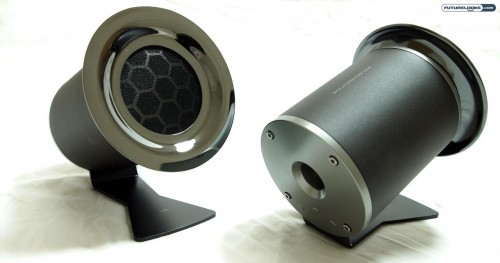 The satellites are permanently attached to their bases, which are in turn permanently set to about a 30 degree angle. In this way, you’ll want to make sure that your speakers are aligned slightly below your ears when you place them on your desk (or wherever else you put them). However, due to the lack of rubberized feet, the aluminum bases do have a tendency to slide around. A quick stop to home depot can alleviate that but Antec could also include them and really refine the user experience.

I understand that the core market for these speakers would likely be connecting them to a PC, but for people who might consider putting them with an HDTV or another similar setup, it’s unfortunate that all the controls are wired through that remote pod. A wireless remote, at least as an option, would have been a nice touch.

Checking Out the Music Mode 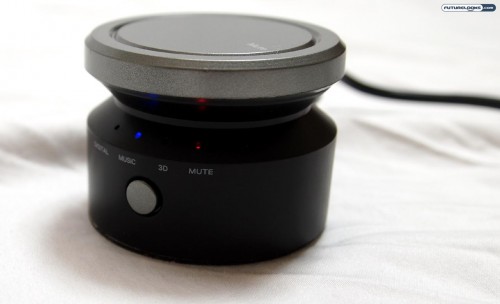 So, how do they sound? Well, the Soundscience Rockus 3D has two main sound modes. First, we’ll take a look at the “music mode.” This sets it up like a standard 2.1 audio system with stereo sound. Let me preface this by saying aural experiences are highly subjective, so your impression may not be the same as mine.

That said, I found the music mode to sound a little on the “bright” or “harsh” side much of the time. I tried connecting the Rockus 3D to an iPod, to my TV, and to my PC for this purpose. I would say that the sound is flat, per se, but the high end was a little too piercing, especially at higher volumes. Even after a thorough break in period with music at moderate volumes. Sound production, on the other hand, was not a problem as these speakers got quite loud quite easily.

Music that had higher notes, like the cymbals in rock and alternative, hit my ear particularly hard. When I lowered the volume and opted for more bass-heavy tracks, the effect wasn’t as pronounced. 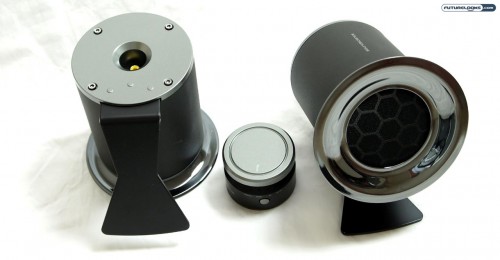 The Soundscience Rockus 3D certainly isn’t the first 2.1 speaker system to offer a “virtual surround sound” experience. I had previously reviewed the Samsung HW-C450, for example, and found the “surround sound experience” wasn’t really that surrounding.

The same kind of thing happened with the Rockus 3D. When I switched to 3D mode, which is done by pressing the button at the front of the control pod, much of the “brightness” of the Music Mode disappeared. In its place came the sense that someone put a bucket on my head and I was hearing sound reverberate through it. The virtual surround comes by way of 3Dsst sound processing.

To test the virtual 3D, I tried a range of video games on my Xbox 360. The sound can come off as somewhat hollow at times, like a muffled dome over my head. It’s not terrible, but it’s certainly not the same as true surround sound. Ironically enough, the 3D mode was most enjoyable for me in games that aren’t exactly 3D: Street Fighter and Rock Band for example. 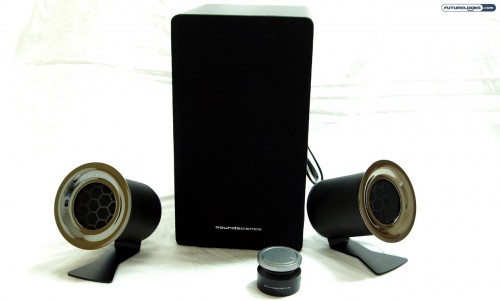 With an MSRP of $199 USD, the Soundscience Rockus 3D certainly isn’t the cheapest option on the block. You are paying for some great build quality and plenty of oomph, though. The virtual surround sound is a bit of a gimmick, but not everyone can set up a true 5.1 or 7.1 system in the space of their choosing.

In terms of sound quality, I feel that Soundscience could have done a bit better. These speakers are definitely better than most of the $50-$80 systems that you find on the market, but it doesn’t offer the same kind of silky smooth clarity that many other systems in the $100-$150 range can offer. Music mode is fairly bright and 3D mode sounds kind of muffled. There definitely needs to be more of an in between for all day listening comfort.

I think Antec’s first real foray into audio equipment under their Soundscience brand has a bright future (no pun intended). I expect that with some tweaks for generation II, they can create that all day comfortable smoothness that we love. The build quality and attention to detail are certainly there already.