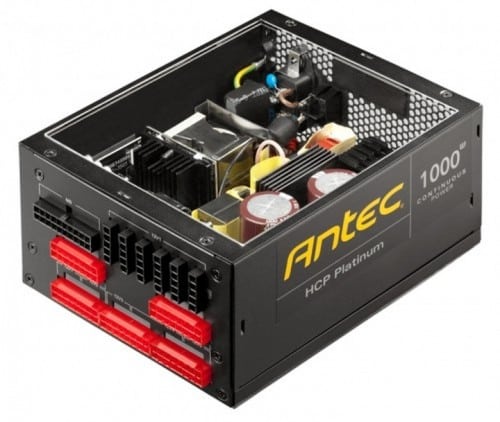 After updating their cases, then their water cooling products this year at COMPUTEX 2013, Antec turns their attention to updating their power supplies with new and more efficient High Currrent Pro (HCP) Platnium units plus a completely new Digital Maximum Performance PSU series.

The new series of High Current Pro Platinum will be available in 850W, 1000W, and 1300W with a number of new features. The 80+ Platinum rated fully modular PSU will have a 20+8 pin MBU, 16-pin sockets (connect up to two PCI-E cables), server-class full-bridge LLC design, CircuitShield IC, and the HCP Platinum OC Link. The latter allows you to connect two of these units in tandem via a proprietary cable to power even the most demanding system configuration.

The HCP Platinum can be a more efficient PSU for your high-end gaming rig, or the core of a massive Fold@Home setup. At this time there is no mention of price or release, but I expect this series to be available for sale before the end of this year or sooner. 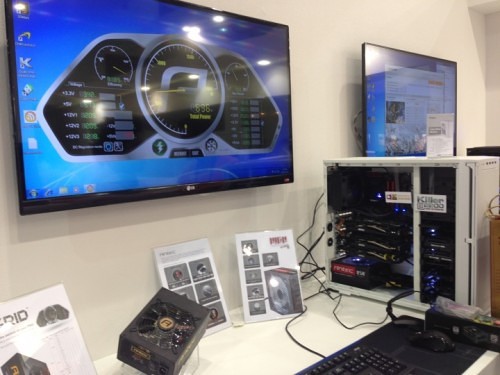 Following the Antec also is showcasing the all new Digital Maximum Performance PSU which is the flagship HCP Platinum with GRID support. High Current Pro Platinum GRID (HCPP GRID) will use a digital PWM bus/I2C technology and custom software to control aspects of your power supply. The HCPP GRID will be available in 850W and 1200W units and Antec promises regular development updates of this state of the art concept as part of their marketing efforts. As such I don’ think we will be see price or release dates for these units any time soon.

All of Antec’s new PSUs now come with an even longer 7 year warranty to rival any warranty available. This is one of the longest warranties for PC components of this type, with the exception of memory modules which are typically warranted for life. It sounds like the Antec High Current Pro Platinum is out to become the best they can be and we like that.

The full press release both new product series are posted below.

Both the 850W model, HCP-850 Platinum, as well as the 1300W model, HCP-1300 Platinum, obtain all the features and specifications, which made their 1000W sibling such a tremendous success: Not just a fully modular design, but cutting-edge and patented 16-pin sockets as well as a 20+8-pin MBU socket for the needs of tomorrow; 80 PLUS® PLATINUM certified efficiency; 7 years of Antec’s renowned warranty and lifetime global support; All Japanese heavy-duty capacitors; engineered as a server-class full-bridge LLC design with a synchronous rectification based on a DC-DC topology to run at 50°C without compromises on safety with a QUAD rail design and protected 9-fold by the CircuitShield™ IC.

To top its flagship series off from any comparison, HCP Platinum features not only StealthWires for nearly invisible cable routing, but OC Link™ as well, a proprietary cable and socket solution to letting two OC Link™-enabled HCP Platinum working in tandem to power the most demanding systems possible.

Antec is pleased to announce the development of a new digital power supply series called the “High Current Pro Platinum GRID™” (“HCPP GRID™”) and is today showcasing prototypes at the Computex trade show in Taipei, Taiwan.

Scheduled for release in Q4 of 2013, the High Current Pro Platinum GRID™ series will be engineered on a totally new platform utilizing digital PM Bus/I2C technology and a custom developed software which allows users to take control of the PSU on an array of operating systems which include Microsoft 32-bit & 64-bit Windows platforms 8 (Desktop), 7, Vista® & XP.

The High Current Pro Platinum GRID™ series will consist of an 850W model (HCP-850 Platinum GRID) and a 1200W model (HCP-1200 Platinum GRID). Both models will have mostly similar features like their HCP Platinum main series siblings, except for the GRID™ PSU control software & digital technology, which replaces the OC Link™ along with a white LED double ball bearing fan with on/off function.

It goes without saying that the remaining features are state-of-the-art as well. Not only does the High Current Pro Platinum GRID™ series feature a fully modular design, but it also includes cutting-edge and patented 16-pin sockets as well as a 20+8-pin MBU socket for the needs of tomorrow.

Antec takes pride in developing GRID™ as the first truly user-friendly PSU control software. It avoids mindless writes to the hard drive and is neither using APIs or DLLs, which would cause crashes while running many contemporary games or RAID arrays.

Stay tuned for more updates on the development of HCP Platinum GRID™” throughout the year.