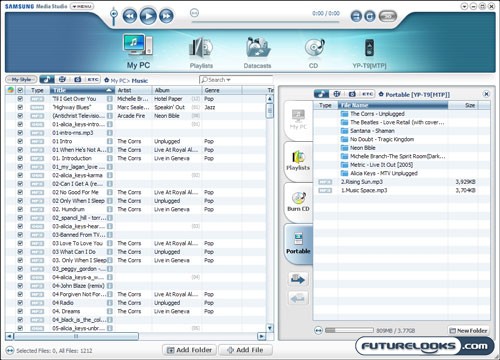 Yes, it bares a striking resemblance to iTunes. While I can understand Samsung’s desire to pander to the masses, it’s a shame that Samsung would make their software asthetically resemble the competition, and a piece of software I don’t much care for.  However, familiarity is a strong selling point allowing iPod defectors to feel comfortable right away. Thankfully, that is where the similarity ends.

Media Studio5 is incredibly easy to navigate and manage which helps wash nearly all of the distaste about the iTune similarities from my mouth. Adding music from folders is a breeze, and adding them to your MP3 player is a simple…wait for it…drag and drop. Even converting video is relatively painless, and only slightly time consuming.

In a rare miss-step from Samsung, the YP-T9 doesn’t quite sound as good as its predecessors. The ability for MP3 files to sound it is already limited, unfortunately, this new Samsung isn’t quite able to sqeeze out every last bit of performance. While perfectly adaquate for personal listening through headphones, the T9 sounds just too tinny for my taste while connected via a mini-RCA connector to my home stereo.

Although cool, the Bluetooth audio capability was somewhat disappointing. Even though pairing was simple, using a Scosche Bluetooth adapter for my home stereo which includes the Onkyo TX-SR604 and Klipsch RF15 speakers, the sound produced was horrendous, and even tinnier than with the cheap analogue cables used earlier. I did try the Samsung with a portable Bluetooth speaker, and the sound was more pleasant. The YP-T9’s Bluetooth is great for small applications…it’s just not ready for prime time.

The YP-T9 does have some bright spots. Video quality was quite good on this little 1.8″ screen. The frame rate is never choppy, and compression artifacts are rather minimal. Not bad if you want video on the go, but can’t be bothered to carry around a portable DVD player, and refuse to deal with the pain that comes with converting video for the video capable iPods.  The other thing that sets the Samsung players apart from the iPod crowd is the inclusion of the FM tuner which allows you to take a break from your stale music collection. What would have been really cool is if the YP-T9 ditched the Bluetooth in place of an FM Transmitter so that you could listen to it in your car without purchasing that part seperately.

Though this may not be a problem with most of the YP-T9s currently in stores, our evaluation model unfortunately had rather sticky buttons. Having gone away from the “touch sensitive” buttons from the YP-Z5, all the controls are on tactile buttons. While I have no problem with this concept, our model had a hard time sensing the “up” button which also shared the control for volume, which became frustrating. While it is not a telling sign of the entire production line having such a problem, I still felt the need to point this out.

Great for on-the-go applications, but rather lacking at home: That basically sums up the Samsung YP-T9 in my opinion. It’s extremely easy to use and although touch pads are slick, having a tactile touch is reassuring.  Despite Media Studio5’s similarities to iTunes, which I’m not so hot about, the software actually works great.  The YP-T9 is a no-brainer for those looking for an alternative to the iPod.  Its small size, Bluetooth and video capability make it unique and the FM tuner capability gives you a break from stale MP3’s. Did I mention it had a voice recorder built in? Although it’s no iPod killer, it’s nice to see that Samsung isn’t giving up on trying to take a chunk out of the iEmpire.