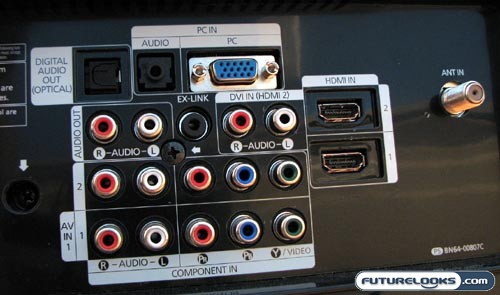 Sweeping around to the back of this Samsung Series 6 630 HDTV, you'll find a panel with a healthy compliment of input options. On the top row are connections for PC in (VGA/RGB for video and 3.5mm stereo for audio) and the output for digital (optical) audio, in case you want to send the digital audio out to a home theatre system. Aside from this are two sets of component connections (one of which can be used for composite video), RCA stereo audio out, antenna in, and two HDMI inputs. There is no DVI connection, so you'll need to use the second HDMI port with an appropriate adapter. Sound for that can come via the provided RCA audio inputs.

Taking a look at the left side of the TV, you'll find a series of additional ports. There is a 3.5mm connection for audio out (in case you want to use a set of headphones), an additional set of composite inputs, an S-Video port (who uses that anymore?), and another HDMI input. There is also a USB port for the WiseLink functionality, which I will describe a little later in the review.

Although most people would only concern themselves with the highest level of performance on any given television, it's also important to look at the other input options if you plan on using them at all. For example, the Nintendo Wii does not output anything close to full 1080p HDTV, so the best you can do is get 480p through a set of component cables. That's why it's important for you to consider all the input possibilities (and their relative performance) when choosing your TV. 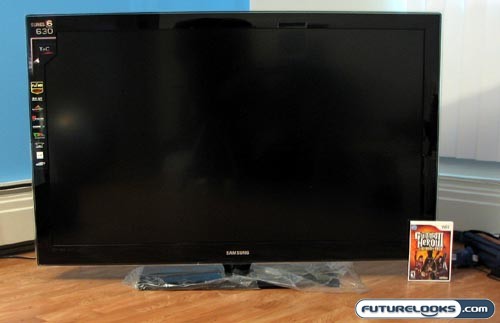 To put it through its paces, I used the Samsung LN52A630 for a number of different applications. First, I connected it directly to the cable in the wall for cable television. This is far from HD quality (480i) and it's stretched from a 4:3 aspect ratio to a 16:9. Given these circumstances, I was still pretty pleased with the picture quality that resulted. I did notice a fair bit of motion blur when it came to action sports (hockey, football, etc.), but regular dramas and comedies were just fine.

Using the Samsung BD-1500 Blu-ray player through an HDMI connection, the difference was like night and day, particularly when I watched "I Am Legend" on Blu-ray. The level of detail was absolutely amazing, the colors were remarkably vibrant, and there was very little noticeable motion blur. The picture was very sharp and I couldn't be happier with the HDMI performance. You'll naturally want to use this connection whenever possible, but aside from motion blur issues, the other connection options are slightly better in picture quality compared to other 52-inch LCD TVs.