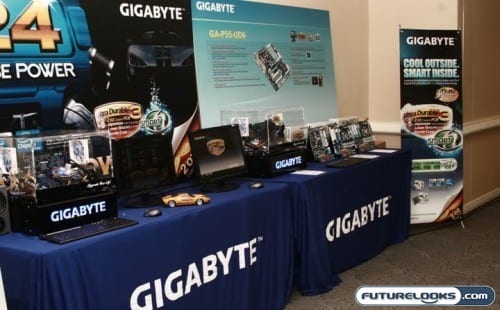 We were recently honored with an invitation to GIGABYTE’s official P55 Motherboard launch party which turned out to be a very informative event. As always, there was massive amounts of fraternizing and partying all night long. Ok, obviously there wasn’t “much” of that going on at such a prestigious launch event. What we did get to do was mingle with Intel, GIGABYTE, and Kingston and picked their brains on what was in store for us with the newest Lynnfield Processor and P55 Motherboards.

That’s right folks, the INTEL Core i5 train is getting ready to leave the station and GIGABYTE is definitely onboard!

Lynnfield and P55: The Gamer’s Choice

As you probably already know, Lynnfield returns to the tried and true Dual Channel Memory interface that once took the PC world by storm. Many of us said there was still plenty of performance to be had with Dual Channel and we think Intel agrees. While Nehalem is the pinnacle of compiling, rendering, and data crunching performance, it isn’t the most cost effective solution for everyone.

Lynnfield and P55 appear to be an affordable solution for gamers based on a design that helps lower the cost of the components. Having said that, any user that is into heavy multi-tasking, graphics and video should also listen up.

Despite its more cost effective design, it doesn’t mean Lynnfield will be pulling any punches when it comes to performance. There’s very little gaming performance difference between Dual and Triple Channel memory unless you use multi-threaded, memory intensive applications that can utilize this power effectively.

Why the Socket Change? 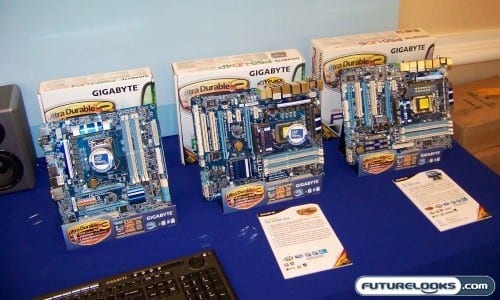 The reason is far simpler than you might expect. The LGA 1366 retention system, while sufficient, wasn’t entirely perfect. Intel engineers have kept up with some of the various issues reported from the field and felt it was safer to revise the design in an effort to create a better socket. However, we’re pretty sure the Lynnfield design, features, and new P55 Chipset also made it the optimal time to make this transition to the new LGA 1156 socket.

The changes help bring down costs because of the more simple design. As we all know in this economy, lowering costs is never a bad thing for consumers; something that AMD has been capitalizing on for quite a while with some extremely aggressive pricing.

Although the LGA 1156 means you’re tossing your LGA 1366 chips out, the simpler, better engineered boards ultimately make consumers happier and the timing was just perfect. Don’t be surprised if these two sockets remain the standard in to the next generation Westmere processor.

GIGABYTE Teaches the Art of P55 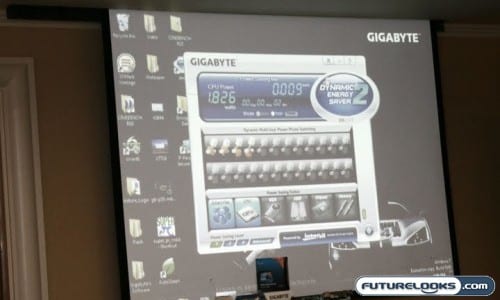 It’s here that GIGABYTE leaves conventional engineering behind and charges forward leading the industry as well as setting new standards. Some new features include both 12-Phase and 24-Phase VRM. This means the CPU will have ample power on hand for extreme overclocking and maximum stability, especially in regards to the 24-Phase. This is further augmented by Precision OV a very useful new power management feature implemented on GIGABYTE’s new P55 offerings.

Engineers have added two eSATA/USB Combo ports to some of the models. The ports double in function for both eSATA and USB 2.0 devices when needed increasing your expansion capabilities. SATA support receives a helping hand with X.H.D. which makes setting up RAID 0 so simple that anyone can do it. It’s as easy as X-H-D!

While TPM and its 2048-bit encryption aren’t completely new, they’ve expanded its capabilities by using a USB drive and/or Bluetooth device like your cell phone to unlock the system with the correctly programmed key. Kind of makes you feel like all James Bond inside.

Smart 6 brings you a new level of system management. It offers a slew of Smart options like QuickBoot, QuickBoost, Recovery, Dual BIOS, Recorder, and Timelock for when you want to give your teen a hint that it’s time to “unplug”. Smart 6 gets an extra hand as Dynamic Energy Saver 2 returns offering improved power management features and software features. Things just keep getting greener at GIGABYTE.