Earlier this year, we reviewed one of the first Micro ATX motherboards to sport the Intel X99 chipset, the ASRock Fatal1ty X99M Killer. The board was fairly unique in the marketplace given that most boards at launch were mainly offered in the ATX form factor. However, ASRock found a niche that they could service, with very powerful, smaller boards, capable of supporting dual graphics, and the latest storage technology. While it wasn’t the first board to bring a flagship Intel chipset into a smaller form factor, it certainly won’t be the last. In fact, they just released their very first X99 chipset board, based on a mini-ITX form factor, and they call it, the ASRock X99E-ITX/ac.

Deciphering the name to start, the ASRock X99E-ITX/ac, as you would guess, is a mini-ITX board, based on a full fat X99 chipset, with an LGA2011-V3 socket. The “ac” on the end says it also has 802.11ac WiFi capability. Looking further, we also get a board with a 6 phase power design and all the high end components found on their larger boards. It even uses the X Series OC Socket, though I’m not quite certain I would want to overclock this board. Not without some better cooling as the included server grade ILM cooler looks to be more for getting you going, than keeping you running. But it is nice they included something that will for sure fit such a massive socket on such a tiny board. 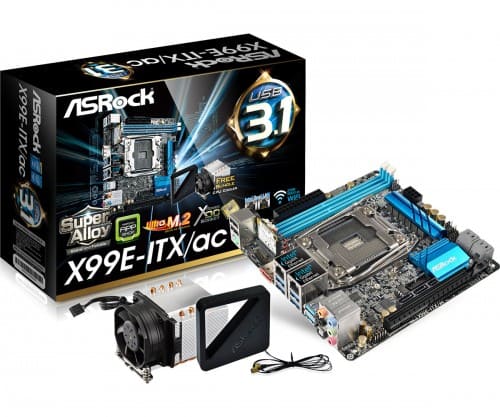 Other features include an x4 Ultra M.2 slot with up to 32Gb/s of bandwidth, along with a 10Gb/s SATA express connector, making sure that storage is one area that is not a weakness. There are still regular SATA III ports if you need conventional drive support. They managed to cram dual Intel LAN ports and Bluetooth 4.0 onboard, and also got two Type-A USB 3.1 ports on there too. Two memory slots provide support for DDR4 memory modules of up to 16GBs in size (currently), giving you up to 32GBs to play with.

The board is currently waiting for an MSRP and a ship date, and we expect the first batch to be fairly limited in quantity, given the niche it fills. However, if we had to do the “Trashcan Mac Pro” build again, we’d definitely consider choosing this board, to give us PC “waste paper basket” that would give the “traschcan” a run for its form factor money. Along with a XEON with lots of cores, and a dual GPU NVIDIA Titan Z, crammed into the mini-ITX Silverstone FT03-Mini, I’m already drooling.

TAIPEI, Taiwan, March 26, 2015 – Intel’s X99 chipset used to be represented by a long line of huge and bulky EATX or ATX motherboards, because the CPU, chipset, memory and whole layout required an extra large PCB to contain the extreme performance. But that was all yesterday’s history. Now ASRock’s research and development team has worked out a way to defy logics, and have built an incredibly small mini-ITX form factor motherboard with Intel X99 chipset’s extremely huge performance. Hence the world’s first and only mini-ITX X99 chipset motherboard – ASRock X99E-ITX/ac is born!

Regardless of its tiny size, X99E-ITX/ac is built around an X99 chipset and an X Series OC Socket. This new socket design by ASRock unlocks the hidden performance of Intel LGA 2011-3 socket CPUs, giving the overall performance a huge boost. The whole set of Super Alloy hardware features are crammed onto the board too, including Premium 60A Power Chokes, Premium Memory Alloy Chokes, Fairchild 60A Dual Cool™ DrMOS which withstands 60A currents and keeps the system cool, Nichicon 12k Platinum Capacitors that promotes performance, plus a luxurious 6 phase power design and digi power.

Other points worth mentioning are the onboard 32Gb/s PCIe Gen3 x4 Ultra M.2 socket for insanely fast SSDs, the 10Gb/s SATA Express connector that will work with future SATA Express HDDs, dual Intel LAN ports that support teaming, and dual band 2.4/5 GHz 802.11ac WiFi with Bluetooth 4.0. To add icing on the cake, there are two Type-A USB 3.1 ports on the rear i/o that allow up to 10Gb/s data rates. Furthermore, ASRock is bundling a server grade narrow ILM cooling fan and water cooling mounting plate, so that user may choose their desired solution for keeping cool.

ASRock has been growing fast and has become one of the three largest motherboard brands with its headquarters in Taipei, Taiwan and branches in Europe and the USA. The young and vibrant company targets at the entry to mainstream segment of the MB business, owning reputation around the world market with its reliability and proficiency. For further information, please visit: http://www.asrock.com/
[/hide-this-part]