Unfortunately, I only had two mismatched SSDs to test the Convoy XL: a Kingston V-Series SSDNOW 128GB and a Patriot Memory TorqX 128GB. The pair were happily connected to my Intel Core i7 975XE system which is fully listed in my original ASRock X58 review though I really should list this out so you can see what exactly we're using and be able to reproduce our results. The operating system of choice was Windows Vista 64 bit.

Although most novices see a pair of 128GB SSD drives, in reality these are two different SSDs that have two different internal JMicron and Indilinx controllers. Choosing the RAID mode was a little tricky since one SSD is much faster than the other. Since we're all about performance, the two were Striped for our tests. On with the benchmarks!

This benchmark has slowly become a standard since it offers both Sequential and Random read/write transfer rates using 100MB to 1000MB files. It also represents small file write speeds with its emphasis on the 4KB file size; a nemesis of some early SSD controllers.

We ran the benchmark first with our slower Kingston V Series 128GB as a single drive and produced sequential results of 118.8 MB/s read and 73.94 MB/s write. That's not too shabby when used in a regular system environment. Let's see what it can do striped with another SSD. 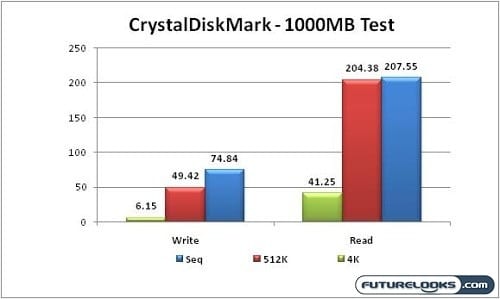 Paired with another SSD drive in striped or RAID 0 mode, transfer rates increased about 81%. With a pair of the previously reviewed and faster TorqX 128GB drives, we can only imagine just how much more performance can be attained. Still, it's nice that the pair of mismatched units could still pull off impressive performance.

This is one of the more useful benchmarks when checking out different IOP performance. In individual testing, the Kingston V-Series offered a healthy 94 MB/s write and 127 MB/s read transfer rates at its peak. 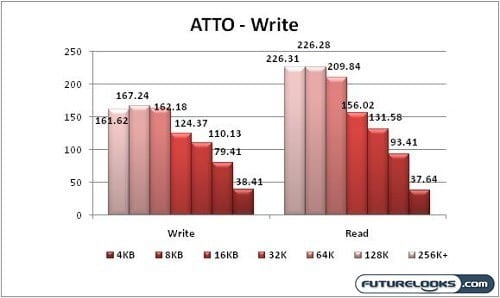 When the pair of drives were striped, we see results of 167 MB/s write and 226 MB/s read transfer rates. This is a healthy performance gain for just two little SSDs. Again, rates would be much higher if we used two higher performance drives instead of mismatching our pair. 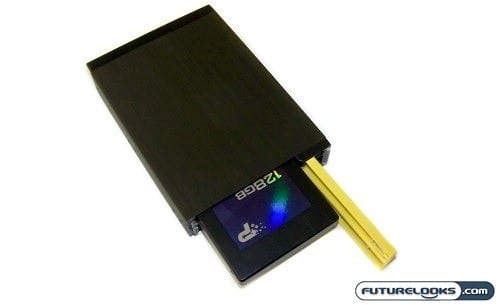 When testing RAID configurations, the weakest link really can affect the all around performance. This includes the RAID enclosure as well. That's why it's important to choose an enclosure based on what you really intend to do with it. If it's going to be used in an important office environment as in a data base, you'll want something larger with its own internal performance controller with redundancy. The Convoy XL is not for this environment.

The Convoy XL is intended for enthusiasts needing more performance that what standard SATA II drives can offer. While two budget performer SSDs is good in RAID, two top end SSD drives in the same enclosure will smoke it. But it is nice to know that the Convoy XL can and does play well with mismatched drives, even ones with such a performance gap as the Kingston V-Series and the Patriot TorqX.

With an MSRP of around $79.99 US, the Convoy XL offers up some cheap performance with an easy setup.