In order to push our test system to the limit, it was important to pick the right software. Since GPU and CPU output the heat in any modern gaming rig we chose to run OCCT to burn the CPU and FurMark to load up the GPU. Ambient temperatures were maintained at 20C throughout testing.

After taking idle temperatures 30 minutes after logging in to the desktop, we ran both torture tests. Temperatures were taken 30 minutes later. We used five sensors from a Zalman ZM-MFC2 Fan controller attached to the following locatons: clip side of CPU cooler, back of the video card right next to the GPU outline, center of the hard drive, South Bridge, and North Bridge chipset. This gives us a good overall idea of where hot spots showed up in our system. All temperatures were taken with the case closed.

How Cool Is the Phantom?

The Phantom’s fans are configured in such a way that the majority of the system’s hot air is forced evenly up through the top and back of the chassis with cool air flowing in from the bottom and side panels. This creates a bit of a wind tunnel effect. Let’s see how effective this configuration is. 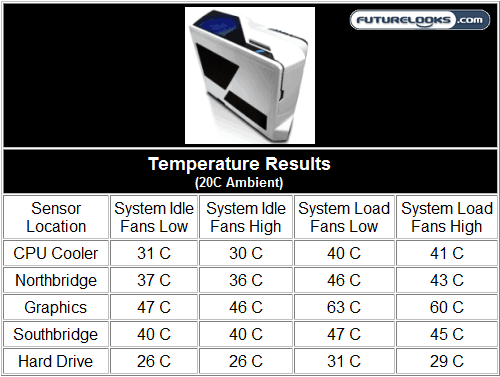 Based on our results, we can say that these are quite good especially based on the amount of air flow coming through. I was surprised to see that adding the optional front and top fan did very little to effect load temps on a single GPU build. However, if your system is running SLI or Tri-SLI, you’ll want to at least add the front fan for slightly better air flow.

Is the Phantom Quiet?

Due to the effective use of fewer fans, the Phantom should end up quieter than most cases. We should be hearing more of the stock AMD CPU Cooler and reference GPU cooler than anything else. 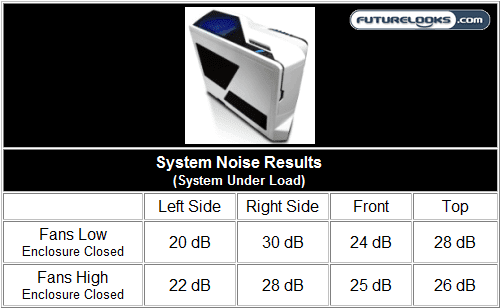 At it’s noisiest, the Phantom’s case fans alone range in levels from 17dB to 20dB which could never really be heard with the test system active. The CPU fan created the most noise especially when the system was under full load. Still, I found the stock reference CPU and VGA coolers’ average 28dB to be completely tolerable. This further drives the point home that an efficient chassis airflow doesn’t require large amounts of fans to excel. They just need to be placed correctly. 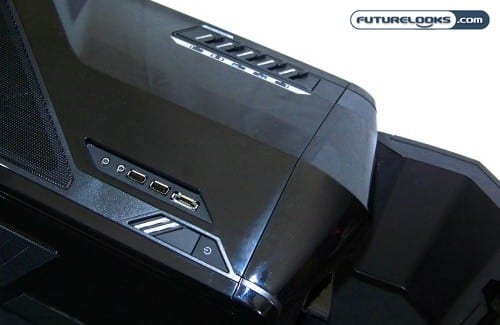 Creative and well-engineered are just a couple words used to describe my first impressions when laying eyes upon the Phantom. When I first inspected this latest addition to the Crafted Series more thoroughly, I found myself considering all of the scenarios that the chassis could serve. While it appears conservative in black, the Phantom actually inspires more creative emotion suggesting it can fulfill many different roles whether it be a professional desk jockey, or full time gamer. Granted, the black chassis would be more suited to the conservative types better, but there’s just something about the more eye catching white and red enclosures that has me wanting one.

Probably the Phantom’s second most important feature is its ability to keep air flowing throughout the chassis. Because it can keep a very hot running gaming system cool, we have no doubt that it can handle any system one could squeeze inside this effective chassis. Remember, it does support extended ATX (eATX) boards so the Phantom will accomodate. The best part is that it is still rather quiet and offers quite a bit of thermal control not only via fan placement but also with the included fan controller onboard. If you want something truly challenging to throw at the Phantom, I’d suggest using a performance CPU cooler, seting the case fans to low, and tucking   it in a cabinet. The Phantom will triumph.

Finally, what the NZXT Phantom does best is stand out among the sea of computer cases that seemingly fail to evolve. With a unique tool-less drive bay retention design, complete fan control, effective cable management, very efficient cooling plus a low noise level footprint, I think many enthusiasts will be happy to own this feature rich and colorful enclosure. That’s why we’re proudly awarding the NZXT Phantom our elusive “Editors’ Choice” award.