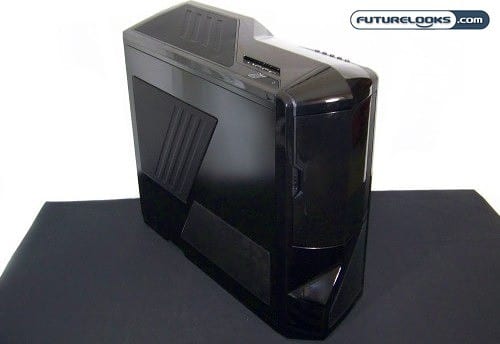 Computer case manufacturers have had to get very creative to attract your hard earned money. In the last year, we’ve seen uber fancy and expensive cases offering a wide array of features, some useful and some not so much. When all else fails, it comes back to the basics which is form and function. Today, we’re going to take a look at the Phantom from NZXT’s Crafted Series which may very well be the form and function you need. But it’s still a looker. Let’s find out if all the angles are covered with NZXT’s latest and greatest!

In order to give you a complete overview of the some of the more interesting features of the NZXT Phantom, we’ve prepared a short video run through…

If you require more eye candy, there are always more pictures in all our reviews on the very last page in the photo gallery.

Just to recap, the Phantom includes seven fan cooling options, but the chassis actually ships with 1 x 140mm front. 1 x 120mm rear, 2 x 120mm side panel, and 2 x 200mm top cooling case fans. The best part is that the fans can be controlled via the integrated variable fan controller built in to the top left of the chassis. It also supports the largest of motherboards and video cards. This includes E-ATX all the way down to mATX. It also isn’t afraid of SLI or CrossFire setups or large video cards like an HD 5970.

Again, the Phantom has a strong tooless feature set that enhances functionality. Both the 5.25″ and 3.5/2.5″ drive bays require only a little effort to use. The 5.25″ bays have some clever, black locking mechanisms that simply press in to release the drive bay from both sides. These particular latches do a really good job of holding your ROM drives in place even if you have to ship it long distances. The HDD flexible removable trays are simple and hold the hard drive pretty securely. And of course, those additional touches like the high quality rubber coated power and reset buttons and LED strips are just icing on the cake.

The NZXT Phantom comes in Darth Vader Black (as tested), Storm Trooper White, and Imperial Guard Red. No, those are not the real names, but we couldn’t help but equate the sharp white paint job with a storm trooper outfit. It’s shipping now and you should be able to find it for around $139 US but expect the white one to be slightly higher in price and harder to find as NZXT has been absolutely overwhelmed with the demand.

Yes, our extremely unfriendly test system makes a return. We’re using some of the noisiest and hottest components on the planet to test thermal performance and noise level performance. That’s one nice thing about window-less side panels – the case will block some noise. Here’s the break down of this torture rack:

Our operating system of choice was of course Windows 7 Ultimate 64 bit. We’ll cover our testing procedure in a little bit, but first let’s make sure we install the parts and note any issues that may or may not have come up. 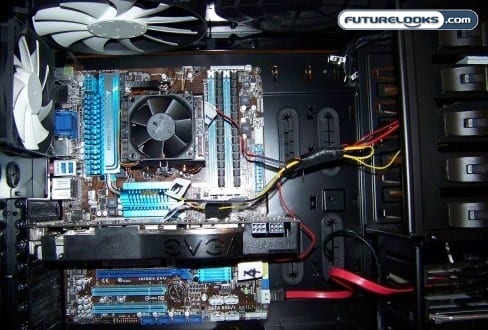 Based on what you see inside and out of the Phantom, it’s actually a pretty easy working with the chassis. The motherboard fits nicely with room to spare which is good for the massive video cards you may choose to install. The tooless ROM drive clips are clever and strong with no movement. Power cables fit nicely behind the motherboard tray and the ability to run SATA power cables behind the tray to the hard drive bays really makes things look nicer.

The CPU cut out and machined holes in the edge of the chassis frame make attaching the expansion cards or working with the cooler very easy. These little things aren’t trivial. They should be industry standard as far as we’re concerned. 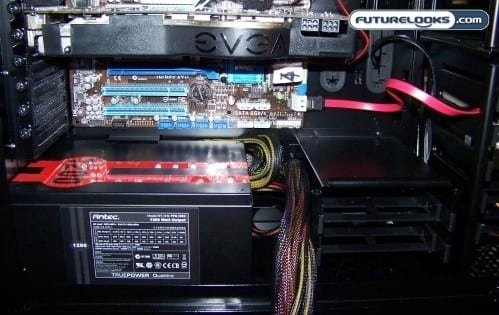 Finally, the massive Antec TPQ-1200 PSU sits on four thick rubber feet which keeps it looking all pretty underneath. Any extra wires actually tucked nicely behind the motherboard tray. There’s just enough space for this elongated beast to fit. Plus, you can remove the hard drive bay in front of the PSU if you just happen to have an unnaturally huge PSU. Otherwise, it should work with 95% of the PSUs on the market.