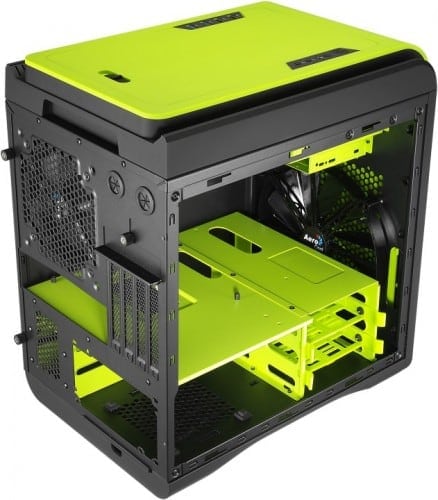 We know that a large majority of the DIY community members like to go extra “manly” with our computers. Everything needs to be dark, angular, and aggressive looking to ensure maximum something. We also know that some people like warmer colors with less of a military hardware look. Aerocool’s new colors for the Dead Silence Cube series ensure they have something for everyone.

The Dead Silence Cube is a compact case designed for Micro-ATX and Mini-ITX builds. It current comes in black, white, red, orange, and gold, which is already far more options than most cases ever get. Now they are introducing pastel colors in blue, green, and pink. These bring a whole new audience to the DS Cube series, such as our female gamers, homemakers, younger kids, and the fashion conscious.

If you are interested in building a computer that is more inviting than intimidating, then the Dead Silence Cube is a great starting point. The best part is they are all available right now for purchase on Aerocool’s website. They still give all the options from the previous DS Cubes such as the windowed side and vented top to show off at the next LAN-party.

06-12-2014 – Aerocool Advanced Technologies, one of worlds leading manufacturers of excellent gaming PC gear, expands its award-winning Dead Silence series by adding three new DS Cube models. Due to the big success of the DS Cube chassis in the gaming and enthusiast community, additional fresh colors green, blue and pink are available as of today. The new models have received some minor modifications, which differ from the already released color models, such as black, white, red, orange, gold, red and black/white. Aerocool highlighted the mainboard tray and all the drive bays by painting them in the individual model’s color.

The option between a Standard and Window version remains for all the nine models. Furthermore, each of the models is equipped with a removable and exchangeable top-cover, allowing users to switch between the standards version for silence operation and a mesh-design version for improved airflow. Solid SGCC steel with a thickness of 0.8 mm provides the necessary sturdiness and reduces the noise-level. All the nine DS Cube models are offering enough space for High-End components, yet are compact enough to be easily taken to a LAN-Party!

Latest Mini-ITX and Micro-ATX motherboards as well as VGA cards with the maximum length of 320 mm can be easily mounted. The inside offers enough space for big CPU coolers (up to 190 mm) and even water-coolers. Aerocool DS Cube is using the available space more efficient by mounting the motherboard in horizontal direction, which makes it even easier to mount the main components inside the chassis. The top-panel can be removed to ease the mounting process further, offering unchallenged usability. In addition, up to three 3.5 inch and two 2.5 inch Hard Drives and Solid State Disks can be mounted in the tool-free bays, which are based on trays with anti-vibration capabilities.

All DS Cube models are supplied with two pre-installed case fans. One 200 mm fan (600 rpm) is mounted in the front and one 120 mm fan (800 rpm) is located in the rear. This constellation offers constant airflow at a very low noise level. The well-thought-out interior layout of the DS Cube benefits the cooling of hardware. Users are able to make individual adjustments by mounting two 120 mm or 140 mm case fans in the top panel or replacing the existing fans by other models according to their requirements.

The new Dead Silence Cube models are available from retailers and online shops starting this week.