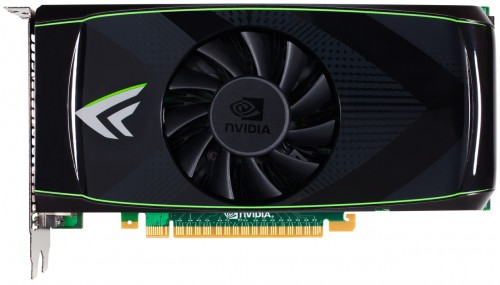 You might say that nVidia has been on fire lately. The launch of their extremely successful GTX 460 was an all out win for not only the company, but also for gamers around the world looking for a great PhysX supporting GPU at a really affordable mainstream price point of $199 US. We appreciate what ATI, or shall I say, AMD has done for gamers up until this point with their HD 5770 and HD 5830 GPUs, but the new hotness has really rained on their parade.

While the GTX 460 was really a shot across the bow of the HD 5830 which inhabits a similar price point, nVidia still needed a challenger to the entry level price point held by AMD’s HD 5770 and to a lesser extent, their HD 5750 GPUs. That’s why this week the green machine launched a new aggressively priced GTS 450 GPU (as low as $129 US) to complete their attack. They call this one the “Sniper” in their line up and this might very well be a head shot.

When nVidia launched their GTX 460 they had a specific group of gamers in mind and similar goals were front of mind when they created the GTS 450. This card completes their trifecta of target groups they wanted to take care of with an offer of the latest technologies like DX11 and PhysX support at specific price/performance points. $499 US for the GTX 480 for best possible performance, $199 US for the GTX 460 and the best all around performance, and the GTS 450 at around $129 US for the best entry level gaming experience.

nVidia looked at common screen resolutions provided by STEAM’s gamer surveys and realized that there were a bunch of gamers that used 17 – 22 inch monitors and played their games at resolutions of 1280×1024 – 1680×1050. This sounds very much like LAN gamers and nVidia has certainly pandered to that demographic with this product. While these are solid facts, we also have to look at the state of LCD monitors today.

Since HD gaming means a resolutions of 1920×1080 many monitors on the market today in the 20 – 22 inch range are actually 1920×1080 and not 1680×1050 and below. It’s more likely that many gamers could simply be accepting lower resolutions simply because their current video card cannot play at reasonable frame rates at 1080p. But of course, if you’re not playing at 1080p, you’re not really gaming in HD and to compete against AMD’s HD 5770 that’s where the battle needs to take place and we’ll be taking it there.

A Brand New GPU for a Worthy Group of Gamers 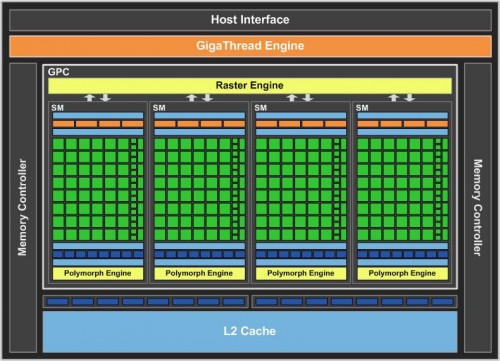 Instead of simply underclocking an existing GPU, nVidia went out and created a new chip for this price sensitive but demanding group of gamers. Whereas the GF104 chip used in the GTX 460 has little in common with the GF100 chip used in GTX 480/470/465, the new GF106 chip in the GTS 450 shares a lot of similarities. In fact, it looks like it’s half a GF104 with some tweaks to ensure that gamers still get a great gaming experience.

As you can see above, it’s almost half of a GTX 460 768MB GPU. But it’s not completely half in some areas in order to maintain the necessary gaming performance required to win and keep gamers at this very sensitive price point. It was the same thing that nVidia balanced very well when they created the GTX 460 and didn’t just simply cut a GTX 480 in half. Whereas performance of the GTX 465 was basically eclipsed by the cooler running and higher clocked GTX 460, we expect that there will still be a healthy gap in performance between it and the GTS 450.

GeForce GTS 450 vs the Competition 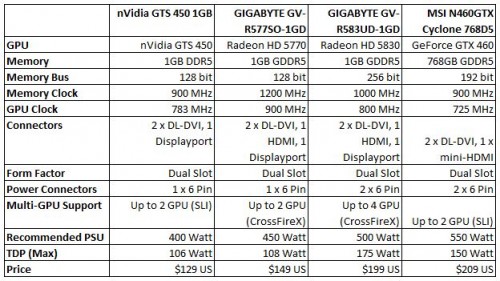 nVidia has really priced the GTS 450 aggressively against its chief rival, the HD 5770 and the slightly detuned and cheaper HD 5750 not shown. The GIGABYTE Super Overclocked version shown in our chart is actually a little more expensive and slightly overclocked than your run of the mill GPU. A regular one from one of the many vendors will be within lunch money of each other on the street. Spec for spec, the GTS 450 sizes up really nicely against the HD 5770 in many categories and this is the fight we want to see in terms of gaming performance.