You Can Have GTS 450 Anyway You Want

It’s nice to see so many different non-reference designs for this GPU out of the blocks. There’s at least a dozen major manufacturers coming out with their own spin on this GPU design. Shown above is the excellent Cyclone design from MSI. We checked out this fan design in our GTX 460 article and came away extremely impressed with not only its cooling performance, but also its ability to remain pretty much silent even when working hard. Innovations like voltage control through MSI’s Afterburner software make this a stand out in the crowd and should be your choice for a few dollars more if you are looking to overclock the snot out of the GTS 450. The best part is that it’s not much more than your standard reference looking design. 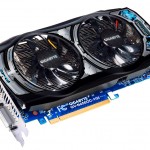 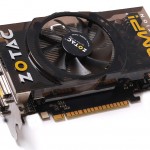 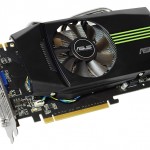 Other designs out there are equally impressive with great cooling as shown in the shots above. ZOTAC has their pre-overclocked AMP! Edition, GIGABYTE rolls out a solid Zalman designed cooler in their version and ASUS has their version with a custom cooler and a VGA connection. With bundled games, promotions and unique designs, GTS 450 really does offer a lot of choice in the marketplace. Especially since only dollars separate many of these versions so it’s best to shop around.

For the purposes of our testing, we put together a system that hopefully reflects that needs and budget of an entry level or budget gamer. We selected the AMD platform mainly because it still represents the best value for the dollar. We made modest choices on the parts so that performance should be more inline with what one would expect in a budget gaming system.

With the exception of a grossly excessive amount of DDR3 memory, we think that the system does a pretty good job of representing the target market for the GTS 450. We already know that excessive amounts of memory do nothing for gaming and should not have an effect on the big picture we’re trying get from the results. All of our components were installed in an open test bench (High Speed PC Top Deck Tech Station).

All of our tests were conducted using the latest available drivers and BIOS revisions. As of the date of this article, we are running ATI Catalyst 10.8 drivers for the HD 5770 and HD 5830. The the GTX 460 768MB gets run with the latest 260.53 BETA driver which we’ll talk a little more about in a sec. Since we are using a non reference factory overclocked GTX 460 board from MSI, this board has been underclocked to mimic the performance of a standard GTX 460.

Noise levels were not measured because we are using a stock reference GTS 450 which has a cooler that is not sold in retail. As mentioned above most of the retail units are using completely redesigned coolers that increase performance and reduce noise levels. We will be revisiting this in a future review of an after-market card.

Power draw will also be measured as a whole system consumption at both idle and load conditions using a power meter plugged into the PSU then into the wall outlet. Idle load will be measured at 30 minutes after booting in from the off position. Load measurements will be taken before the conclusion of our FurMark stress test when the GPU is producing the highest level of heat.

Unless otherwise stated, benchmarks will be performed using default settings with Vsync off and we use an HD gaming resolution of 1920×1080. Please see each test for specific modifications. Let’s get cracking!

As with any overclocking tests, your mileage will vary. However, we are overclocking the standard reference board from nVidia thus we expect that non-reference versions with better coolers and higher quality components should exceed what we show you today. 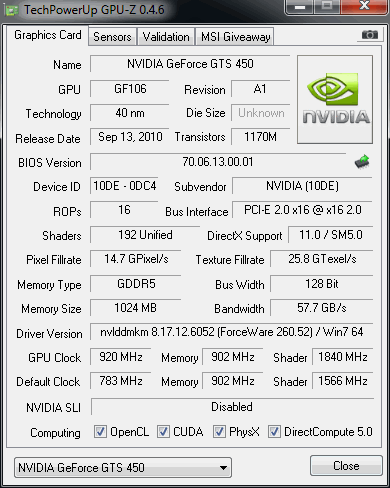 As it stands, our reference nVidia GTS 450 is able to overclock from its stock 783 MHz to an impressive 920 MHz right out of the box. Our margin was about 5 MHz as the card was slightly unstable at 925 MHz but completely stable at 920 MHz after confirming with multiple runs of Furmark as well as looping runs of 3DmarkVantage. Temperature topped 80C using the reference cooling solution.

We will be including benchmarks for overclocked performance in our tests to see if overclocking is worth it and where it is worth it. Tests will be broken down in areas such as synthetic benchmarks to games by DirectX version to PhysX performance. We also have one very special test at the end for users of Adobe’s Premiere Pro CS5.