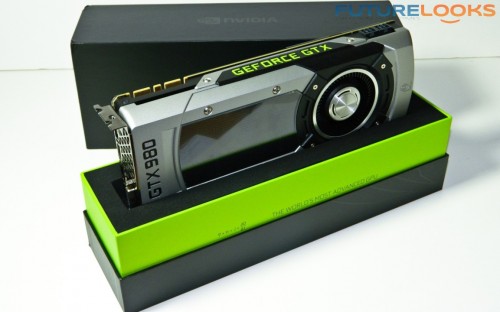 On September 18th, NVIDIA launched the brand new GTX 980 and GTX 970 to PC gaming fans at their GAME24 event. The very next day, GPUS from both ASUS and ZOTAC (and more) hit the shelves. Even system builders like iBUYPOWER were ready with stock on hand to build your latest GTX 900 series system. And now we’ve got one too and we’re running NVIDIA’s latest GTX 980 through its paces.

Yes, the NVIDIA’s new GPU is based on the Maxwell GPU architecture, but it’s definitely been beefed up over the first generation Maxwell that came in the GTX 750 Ti. While the first generation created a sub $150 US video card with great performance, it was optimized for mainly 1080p gaming at reasonable settings. But with highly tessellated games like Crysis 3, Metro Last Light, and various Assassin’s Creed titles, it was a big challenge for the GPU, and of course 4K was simply out of the question unless it’s just standard desktop use.

As with every new generation of graphics architecture, the goal of the NVIDIA GeForce GTX 980 video card, is to replace the generation before it with even better performance, and sometimes at a better price. Let’s see how the new GTX 980 does against its predecessors, and against the latest games! 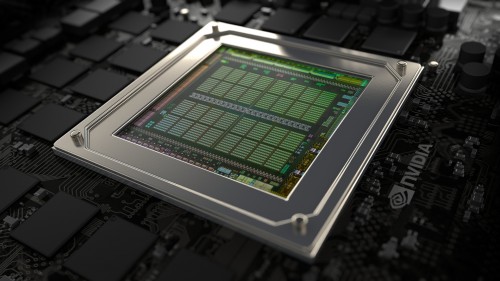 After studying all that the GM204 Maxwell GPU offers, it’s poised to be an impressive leap in terms of architecture and features compared to Kepler, which is very surprising as it doesn’t seem like Kepler could ever be replaced. Lets go down the list of the most important features.

Core Enhancements – The new flagship Maxwell GPUs get bumps and refinements in all of their resources in preparation of the impending launch of DirectX 12 games coming in the next year. Memory is increased to 4 GB stock and a frequency boost to 7 GHz. Coupled with a 256-bit memory bit interface, bandwidth reaches 224 GB/sec. The 980 also receives 64 ROP pixel pipelines over the 780’s lesser 48 which can noticeably improve 3D performance. And, finally, one of Maxwell’s most overlooked features includes refinements made to improving CUDA core efficiency which is one reason why the GTX 750 Ti outperforms some the last two generation’s more powerful cards. 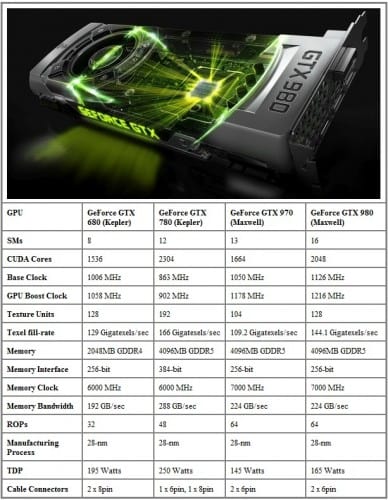 Efficiency – Despite these core improvements, Maxwell is far more efficient than ever consuming less power but able to do more. How you ask?  Maxwell’s Streaming Multiprocessors have been re-optimized so that the CUDA Cores are utilized more often to increase graphic performance and more impressively save power. Additionally, the GTX 980 consumes a mere 165 Watts at full load and the GTX 970 needs only 145 Watts. Keep in mind that the GTX 780 needed 250 Watts at max load. That alone should save enthusiasts important money as you won’t need a more expensive high wattage PSU to support two cards. In fact, a good quality 80Plus Gold 650 Watt will easily do 2-way SLI.

Video Memory and Cache Efficiency – The last two hardware enhancements worth mentioning are that the GPU comes with stock 4GB GDDR5 VRAM operating at a mind boggling 7000 MHz (7 GHz) and the L2 cache has been increased to 2MB which is four times larger than Kepler. That may seem unimportant. However, if you recall Intel’s jump to Ivy Bridge, the CPU utilizes its L2 cache so efficiently that the CPU doesn’t need to access RAM as often. Similarly, Maxwel utilizes its own internal L2 cache more often than going to the GDDR5 memory for data resulting in a performance increase. Never underestimate the cache! 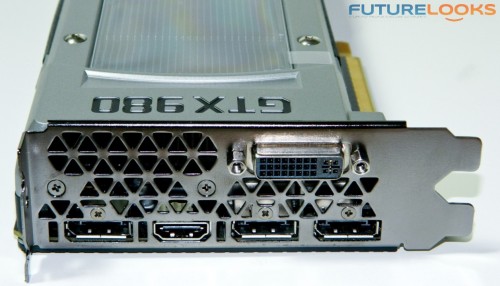 We think the best part though will be the price. At under $599 US (and under $399 US for the GTX 970), NVIDIA has given gamers, something new to drool over. Traditionally, things that in “60” and a “Ti” become the sweetspot gamer card, so we can’t wait to see what a GTX 960 Ti will have to offer. But for now, let’s continue with our look at the GTX 980!