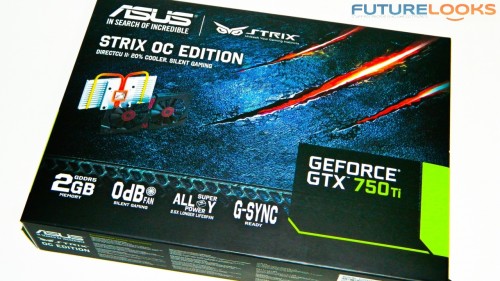 At COMPUTEX 2014, Futurelooks had a chance to check out a new series of hardware and peripherals called STRIX. Unlike ROG, which is geared towards hardcore enthusiasts and overclockers, STRIX is more for the mainstream gamer looking for great performance, factory overclocks, low noise, as well as exceptional stability. The ASUS STRIX GTX 750 Ti OC Edition video card is not only factory overclocked, but ASUS says it can run perfectly silent when the GPU isn’t doing a lot of work, but still runs virtually silent when you are gaming.

Running an overclocked card without a fan? Are you nuts? We put it to the test.

The most important features are as follows, but keep in mind, most of them are shared across the entire series except for zero RPM cooling fans. Any STRIX GTX 750/750 Ti OC features a zero RPM feature which we touch on later at the end. However, the upper echelon GPUs can still handle heat, but do so without insane noise, which is one of the advantage of the STRIX series overall. 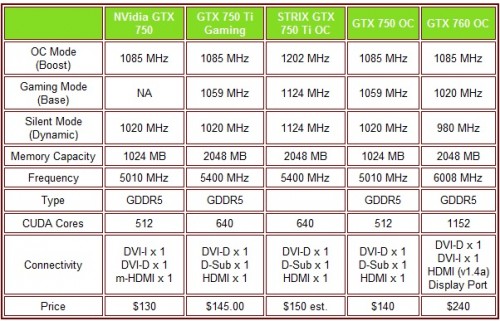 The table shows us where the STRIX version of the GTX 750 Ti fits in the grand scheme of things. In terms of features and pricing, it seems to fit both in and out of its “shelf space”. We’ll see this more clearly as we get along with the review and start putting some numbers down.

The ASUS STRIX GTX 750 Ti OC Edition has 2GB GDDR5 video memory which is a necessity these days for the latest games. Anything less would result in games loading and playing a lot slower, especially with higher resolutions.

As for the $150 US estimated price tag, it appears that it’s hitting the shelves for a just a bit more these days (around $165 – 175 US). And while it’s non STRIX brother, the vanilla Direct CU II edition, sells for $150’ish, we’ll just have to see if the extra coin is worth it. 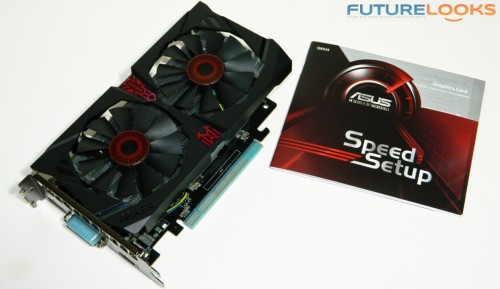 The ASUS STRIX GTX 750 Ti OC Edition doesn’t come with any accessories other than manual and DVD software disk. If you’re expecting a bundle game, you’ll have to jump to a GTX 770 or higher, to take advantage of any NVIDIA promos at the time of this writing. However, the software DVD has a working WHQL video card driver and GPU Tweak which is used to overclock or tune any NVIDIA based video card. 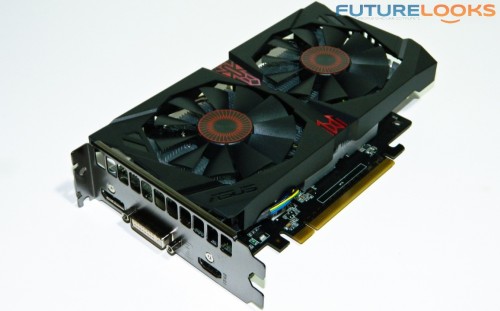 The ASUS STRIX GTX 750 Ti OC Edition isn’t a very big card at all. It’s roughly the size of the reference card and surprisingly light. The card sports a dual fan, matte black GPU cooler. The design is such that the four strickers and shroud design make you think of an Owl, which is one of the brands hallmarks. While creative, the design doesn’t quite jump out and impress you like the ROG series, or even the basic Direct CU II series.

The GPU cooler consists primarily of standard aluminum with two nickle plated heat pipes running through the center. In fact, the GPU cooler is slightly longer than the PCB which should result in more than necessary cooling. The two fans are about 80 mm in size. While the specs aren’t listed, they’re most likely 40-45 CFM capable and the noise will be measured in testing.

Let’s set up the test system and test the STRIX!