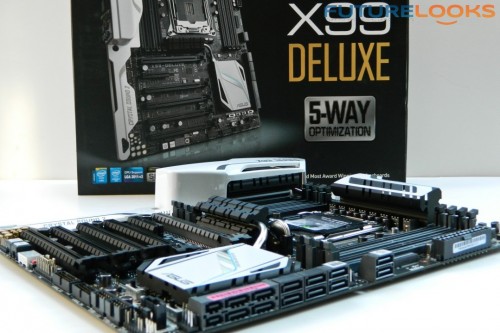 Intel’s new Haswell-E CPU series (reviewed here) and its accompanying X99 chipset launch has had its challenges. Originally, Haswell-E was going to get a completely new socket. Although the new LGA2011-3 is not backwards compatible with previous CPUs, it does work with all coolers that worked with standard LGA2011 sockets from the X79 platform. Those late in the quarter changes made it very difficult for Intel partners to validate their X99 platforms and solidify their products lines. In fact, only partners with enough resources were able to launch on time with the August 29th embargo lift. That means, ASUS came through first, with GIGABYTE right on their heels. The rest are still catching up.

With BIOS completion, software, and driver support at front of mind, ASUS was able to complete their series in time. Hopefully, being first, doesn’t mean a sacrifice in the all important End User Experience. And with that, we’d like you to join us for a look at the brand new ASUS X99 Deluxe LGA2011-3 motherboard, but for the new Haswell-E CPU series. 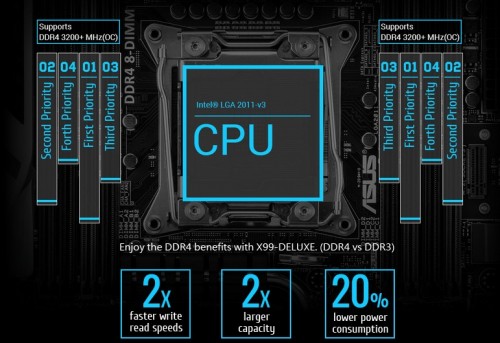 There are some great features this time around in Intel’s latest X99 chipset, that really make sense and should please users looking for a flagship solution. Here are the more important ones to note on the ASUS X99 Deluxe…

One thing that we did notice was that the M.2 port supports PCIe SSDs and not a M.2 SATA based ones. Therefore, it doesn’t have native SATA support for an M.2 SATA. It will only support M.2 PCIe SSDs. So if you bought a SATA based M.2 SSD, you won’t be able to use it on this board. 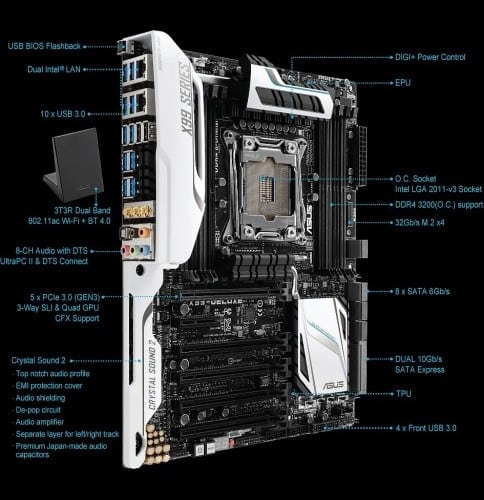 From ASUS’ handy picture, users can easily see what kind of connectivity the X99 Deluxe offers. Sure, the connectivity and layout appear standard. But, having a BIOS Flashback button makes it easy to recover from a BIOS goof.

With dual band 802.11ac offering such great throughput, you’ll find it onboard, along with dual INTEL Gigabit ethernet ports. Audio is taken care of with their Crystal Sound 2, which takes advantage of all the right PCB and audio improvements to clean the audio up. Granted, it’s not exactly what high end audiophiles may require, but it should prove to be one of the better onboard solutions.

As you can see, ASUS loaded the X99 Deluxe with as many features that they could ready for launch. The board also commands a flagship price of $399 US at launch, making it one of the more expensive offerings. 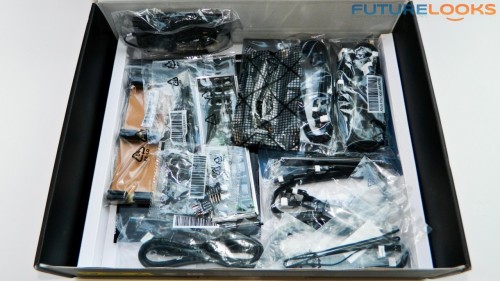 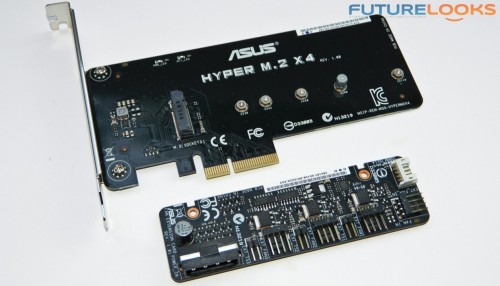 Also in the box is an M.2 PCIe add-on card which supports a single x4 PCIe SSD. Keep in mind it has to be an M.2 PCIe SSD and not an M.2 SATA SSD as mentioned earlier. For best results, plug it in to one of the PCIe x4 (smaller) slots, or an x16/x8 slot. The card will simply scale back to x4 so don’t waste your money on any faster M.2 format. And, of course, you can see there’s a 4pin card with a 4pin Molex power port, which gives you additional ports to control and adjust your fans.

So overall, a very complete bundle. Let’s have a look at the board itself next!