Our test system was setup with the following components. The system is the same build used to test previous cards with the case fans disabled and the side panel removed. Please note your thermal performance may vary based on your PC case, fans, and other installed components. I also used the CCC 12.6 drivers with the R7770 which is suppose to improve performance in DX11 titles and 3DMark11.

As an AMD GPU you will need to install Catalyst Control Center as part of the driver package. While this is solid software, you will need to install MSI Afterburner to unlock the R7770 PE’s full overclocking potential. MSI Afterburner is well designed overclocking software than gives you near complete control over your GPU specs. With the green and black color scheme, Nvidia was clearly the vendor in mind when first built. I would really like to see an AMD version if it did nothing more than change the green color to AMD red. 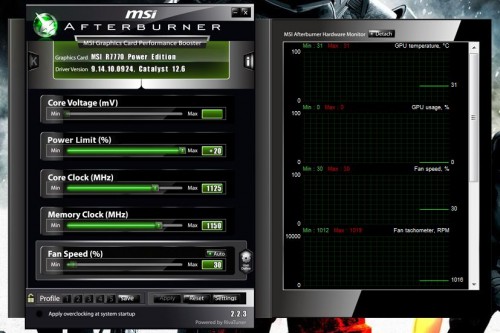 I will make this short since I overlooked this at first during testing. When you start MSI Afterburner, immediately go to the option menu and click “Unlock Voltage Controls”. This will allow you to tweak the Aux voltage and memory voltage in addition to the core voltage. These will ensure more stable and higher overclocks and called the MSI Triple Over Voltage.

MSI Afterburner itself is straight forward enough for anyone who to use without instructions. I do recommend entering clock speeds manual by clicking on the number as the sliders do not always move in 5 MHz intervals. You can save up to 5 profiles that can be loaded with windows and micro-manage the fan controls. The latter can be used to improve performance in case with weaker airflow or bring the noise level down even further.

Overclocking the MSI R7770 was no so good at first. Using just the core voltage I could only reach a pitiful 25 MHz boost with 100% stability. Once the Triple Over Voltage was used (particularly the AUX voltage) I could reach a 125 MHz overclock on the core with 100% stability. My card maxed out at a core speed of 1225 MHz and memory at 1200 MHz (4800 MHz effective). I could get the core up to 1240 MHz, but DirectX would crash at that speed after a few minutes gaming.

Since we are on the subject of 3D use, lets move on to the MSI R7770 PE testing starting with the synthetic testing. I do know there were some improvements in the latest AMD CCC drivers particularly to DX11 performance and some minor stability fixes. I also kept the cooler in the dual fan setup to improve overclocking for the memory as well as the GPU. 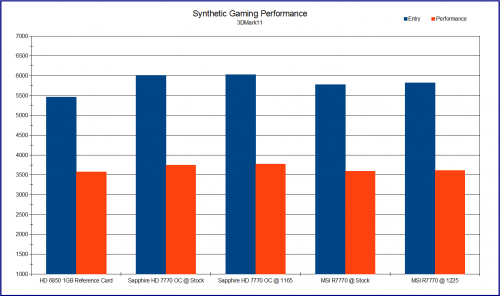 The driver update from AMD was suppose to improve performance in 3DMark11 by up to 11%, but this is just not the case as I saw a lose of up to 5%. This is a little outside standard deviation and worth noting. I also see the performance improvement via overclocking is like the Sapphire in that it is too minor to make a difference in this test.

Once again I am testing performance across all three DirectX versions. Resident Evil 5 is tested using the variable benchmark with settings maxed out, frame rate unlocked, and VSync disabled. AvP was tested with its default settings which includes DX11, more moderate tessellation, and high graphical detail. 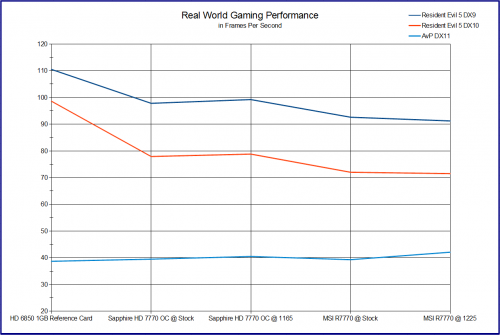 There is a very unusual behavior in these test as well. The new AMD 12.6 drivers seems to have reduced performance in DX9 and DX10. The DX11 test shows consistency the higher the clock speed the better the performance. This gives the MSI R7770 the advantage thanks to better overclocking than the Sapphire HD 7770. But notice how the similarly priced outgoing HD 6850 performs in comparison.

Since the driver update seems to be focused on improve DX11 performance, lets take a closer look at it. Metro 2033 was testing with settings completely maxed out with all the graphical goodies enabled. Battlefield 3 was tested on the Default High settings with AF up to 16x instead of 8x and HBAO enabled. 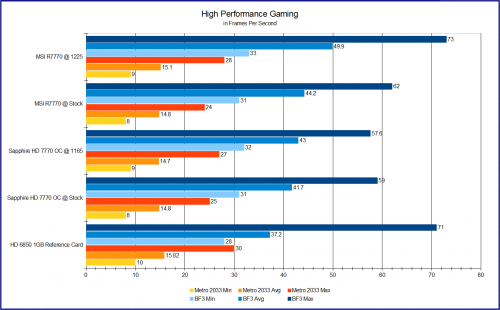 There is nothing out of the ordinary this time around. At stock speeds the Sapphire comes in ahead of the MSI R7770 PE in Metro 2033 due to the higher default clock speed; however, the R7770 has better performance in Battlefield 3 due to the improved drivers. Like with the Alien Vs. Predator test, the 1225 MHz OC improves performance further by a 11.4% in Battlefield 3. There was virtually no improvement in the now dated Metro 2033 tests.

You’ll notice that the HD 6850 starts to fall behind in BF3 which is of course a much newer and better optimized engine for DX11. Let’s continue on…