While performance of the Sapphire and MSI HD 7770 cards are virtually identical, difference in design comes into play when it comes to our next set of test. First will will look at the power consumption of the MSI R7770 PE1GD5. Keep in mind I tested the card with both fans in the dual fan mode. 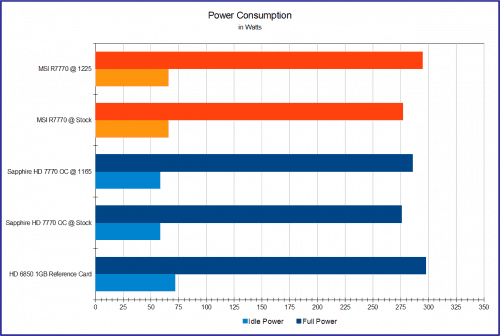 The MSI R7770 PE does use more power at idle due to the additional 12V fan. It does make up for this at full load using just under 1 watt more power. Overclocking is another store since MSI has Afterburner which allows me to run even more power through the card. Even then there is less than a 10 watt difference with the Sapphire HD 7770 and it still uses less power than the reference HD 6850. Removal of the second fan brings the power consumption back in line with the Sapphire HD 7770.

The MSI R7770 PE should have improve cooling performance due to the addition fan being used. Once again this was tested in the dual fan mode and you should expect higher temperatures in the other two configurations. 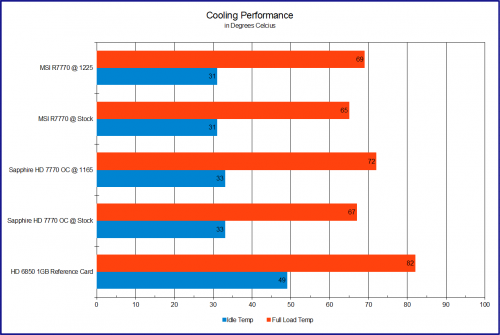 I am actually impressed with the cooling performance here. The MSI R7770 keeps the GPU temperature below 70°C at full load while overclocked and brings temperatures down 2°C at idle.

I did test the other two fan modes but did not include them as the dual fan mode was the best performance the MSI R7770 PE1GD5/OC could offer. The single fan mode did bring down the audible noise level by a noticeable degree with similar performance to the Sapphire HD 7770. The stacked fan mode did improve the air pressure, but had the same performance as the single fan configuration. The stacked fan mode is best used in a case with limited ventilation to improve cooling while maintaining a shorter card design.

Overall I think the TransThermal cooler is far more than a gimmick and clearly has practical real world use. You can basically configure the card to fit your PC needs. Combined with controlling the fan profiles via MSI Afterburner, you have a solid set of tools to get the most out of this GPU’s cooler. 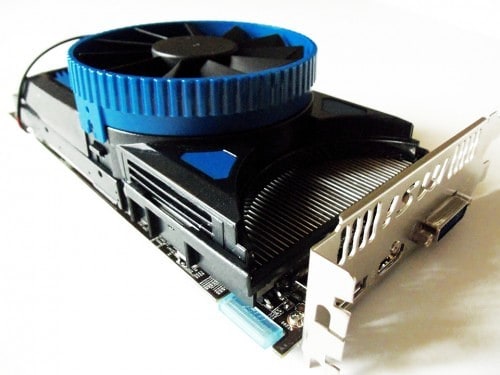 The MSI R7770 PE1GD5/OC is very customizable card with decent mid-range performance. You could use this card as an upgrade to any pre-built system with a solid power supply to bring graphical performance up to custom built PC levels without breaking the bank. Or you can just as easily use this card as the core to a media center PC with very little noise thanks to the excellent cooler and MSI Afterburner software.

Overclocking the MSI R7770 is another matter entirely. As with the the Sapphire HD 7770, overclocking just doesn’t seem to improve performance as much as it seems to make results more erratic. As most games on PCs these days are console ports and built under DX9, you may want to leave overclocking on the sidelines. If you mainly play DX11 games, then the extra performance is worth the fairly short time I spent finding the max OC for my card. In fact, this was the area in which we found the new architecture to outshine the original, yet similarly priced, HD 6850. If you play newer DX11 titles mainly, then the HD 7770 edges ahead at the similar prices.

The MSI R7770 PE is a very intriguing graphics card. Much more so than the previously reviewed Sapphire HD 7770 in a number of tangible ways. It is the only card I have seen that is mechanically customizable to my needs. On top of that, it does everything it advertises well. At an MSRP or $149.99 (as low as $129 US with recent rebates)  it is well worth the $10 premium over stock HD 7770 cards, but could see a lot of competition from the Nvidia GTX 550 Ti which is not too far away in price as it starts to skim the $109 – 129 price points these days. It does have PhysX support going for it which the AMD cards do not, but does give up FPS in a heads up race.

Given the recent pricing adjustments and sorting out of the marketplace in terms of old products, we are starting to feel more confident about the HD 7770 moving forward. Especially it’s DX11 performance. At the same time, we are also quite a bit more impressed with this particular iteration of the HD 7770 than we have in the past with the Sapphire. In the end, it represents a great value that we’re happy to recognize.