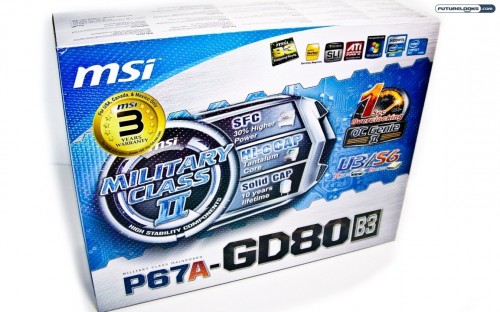 We’ve had the privilege of reviewing the most affordable mid-range P67 motherboards available which included the MSI P67A-GD65 and others. We highlighted any features that resulted in improved system performance in our tests. While all the boards in the round up use similar technology to achieve their objectives, it’s nice when function and design align. A good example is the GD65 with its MSI OC Genie II, driver-Mosfets (DrMOS), intuitive software bundle, and a well rounded accessories bundle for setting up the motherboard.

For all intents and purposes, the MSI P67A-GD65 is a very affordable option an INTEL platform. Even with Z68 boards dropping around it. But there are some who like a extra performance, particularly when overclocking. That’s where the P67A-GD80 fits into the picture. It’s a tougher board that can be found at decent pricing and is said to be able to overclock better. Let’s find out if that’s true! 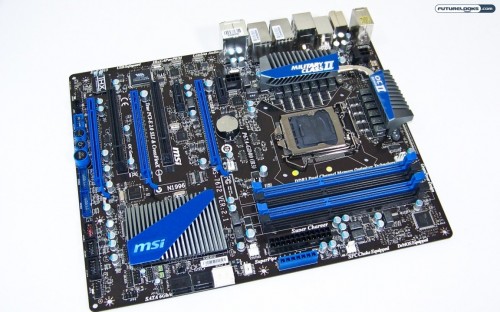 Naturally, this is a B3 stepping P67 motherboard which addresses the issues that early P67 boards had and we’ve heard that some manufacturers have taken the B3 opportunity to make some last minute tweaks underneath that we can’t see. As for the GD80, it’s designed to give users a little more performance from their CPU given the extra VRM circuits around the socket. Let’s look it over first before testing in our video overview and unboxing.

The GD80’s theme is super clean. The overall layout is very similar to the GD65 with only a few changes worth noting. For example, the power, reset, and OC Genie buttons are located near center bottom now. This also includes the placement of the USB 3.0 expansion bracket ports. We also noticed that there are fewer SATA6Gbps ports than on the GD65. There is also a 6-pin auxiliary PCIe power connector right above the top PCI Experss x16 slot. For other than for ensuring high end cards like the GTX 580 or 590 have extra power, it’s a little unusual given that the board only supports 2-way NVIDIA SLI and AMD CrossfireX.

About the only miniscule issue tuning enthusiasts might run in to is the placement of the 24-pin and blue voltage access header. It’s not uncommon for the main PSU power cable to lean over that part of the board given the usual method of running wires in a case. For our purposes, we use the ports mainly for voltage monitoring to make sure the board is functioning well.

Price for the board is around the $199 US range making, making it only marginally more than the lower end GD65 version at $179 US. It’s available at most major MSI dealers like NCIX, NewEgg and others. 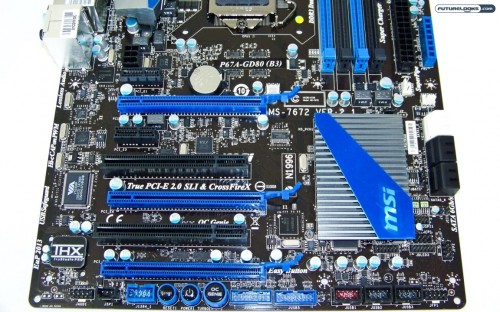 Nearly identical to our P67 Roundup, we’ll be using an unlocked Intel Core i7-2600K processor to see where the motherboard can go in terms of overclocking after the stock tests. Here’s the hardware configuration.

We’re using the latest BIOS on the boards. Some of the fixes as of late help upper frequency stability as well as some BIOS setting tune ups. We’re using NVIDIA’s 270 series video card drivers. The HyperX Genesis DDR3 was used to confirm each motherboard successfully supports 2133MHz, or overclocked frequencies.