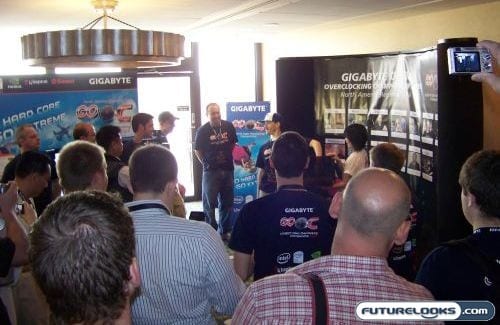 Day 1 of the official competition was swimming in anticipation as each gladiator waited outside the arena exchanging stories of their successes and failures. Demonstration systems were on hand containing components from all of the key sponsors, showing off video footage of previous events and video game demos. Although these distractions were available, most competitors were just anxious to see what kind of hardware they would be using to secure the title of champion.

At that point, GIGABYTE’s event director stepped forward with a box of numbered balls. Each competitor chose a ball which assigned a station. This ensured that there was no favoritism and kept things very interesting. Components can vary in their overclocking capabilities. Our Pre-Show Report showed off much of this hardware.

As you may have already heard, Fugger was in attendance. He alone has won more overclocking contests and titles than I could count. While he was in the competition, he wasn’t competing to secure a spot in the World’s OC Championship to be held in Taiwan. If anything, he’ll probably be setting the standard to beat. Either way, the U.S. Team should be one excellent bunch come the final Computex competition. 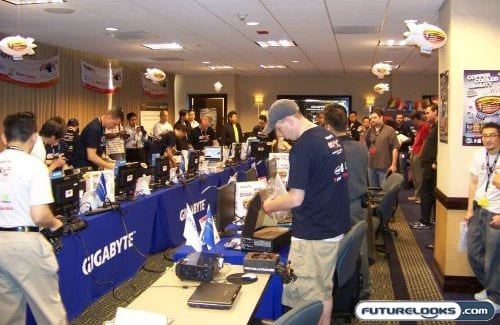 Everyone was then let inside where they took about an hour to assemble and configure their systems in preperation for the contest. It takes a good hour to make sure the system is a hundred percent ready. So, for that hour plus, the room was a mad house while everyone ran about getting set up and installing software drivers.

There’s a lot of prep work that has to be done. There’s a basic method to LN2 cooling. Both the CPU and GPU coolers are replaced with two different “pots”. These pots are specially machined aluminum or copper cups of sorts that sit on top of the CPU and GPU that are carefully filled with LN2 when the system is ready.

Before using any LN2, the motherboard has to be water proofed, so to speak, which requires attention to detail lest you short out your system with condensation build up. This means using a lot of various tricks such as Vaseline, insulation, clay, and other kinds of foams (Editor: Kinda sounds dirty).

Checking out Some Elite Configurations 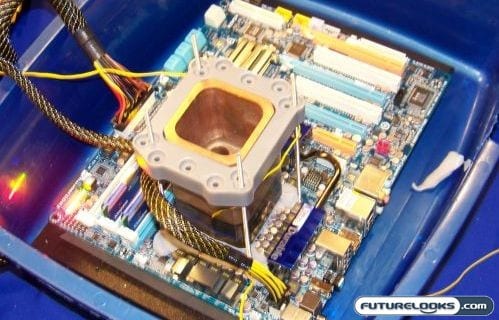 This particular system was using what is considered to be the pinnacle of available Pots. The better the pot design, the better it cools and the greater chance there is of success. You’ll see other pot designs in the galleries at the end of the article.The sysem was also carefully wrapped with a bit of insulation before being put inside a plastic tub which was then filled with a non-conductive, safe chemical solution. This negated the worry of any condensation build up as the pot was filled repeatedly during competition. Pretty darn slick! 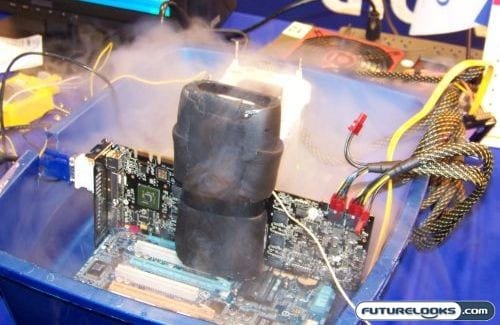 Some of the CPU temps ranged from -50 to -95C during overclocking, which greatly depended on the pot used. These temps are necessary to keep the CPU stable at 4.8 GHz and higher. However, higher overclocks really come down to the luck of the draw CPU. There are never any guarantees you’ll hit super human overclocks even with the best equipment. But, at least the odds are in your favor.