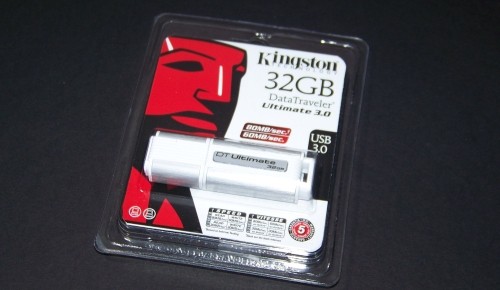 With all the data shuffled around in the information age we live in, the ability to store and transport data files as easily as possible is important. Companies responded by first started offering USB 2.0 drives with storage capacities all the way up to 256GB. Unfortunately, USB 2.0 transfer rates aren’t very quick. The thought of waiting to fill something that size with files is mind numbing. Fortunately, the speed problem has been solved thanks to the latest USB 3.0 flash drives.

Today we’re taking a look at the Kingston 32GB Data Traveler Ultimate 3.0 USB flash drive which is not only beefy at 32GBs, but also supports the quick transfer speeds of the USB 3.0 standard. Let’s check it out! 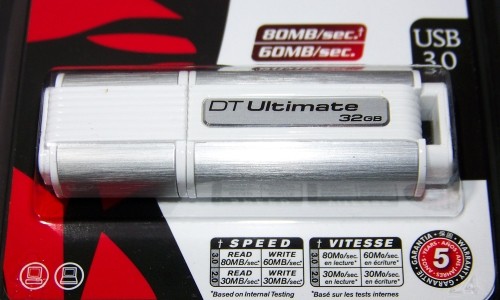 Aside from the obvious, the DataTraveler series continues its reign as Kingston’s most popular USB flash drives. Only this time, it gets a couple internal controllers with a bridge chip to achieve USB 3.0 performance which has been proven to be much faster than USB 2.0 internal or external storage devices. The new DataTraveler Ultimate (DTU) 3.0 comes in 16GB, 32GB, and 64GB capacities and unlike SSD drives, the read and write specifications are the same throughout the size line up.

The DTU 3.0 features an attractive “storm trooper” white plastic housing that’s a little larger than some USB flash drives. It also utilizes a dual USB adapter cord for connecting to USB 2.0 ports only. Otherwise, only one end needs to be connected for this USB 3.0 device to function. We’ll talk about that more in a sec.

Comparatively speaking, USB 2.0 and 3.0 DataTraveler USB flash drives all come in similar capacities. As usual, the housing changes a little along with the internal memory controller that utilizes the flash memory. While I can’t confirm what flash memory is used, I can tell you that it needs to be of a high grade in order to keep up with the speed of the USB 3.0 controller. While my old school DataTraveler flash drive came in a HyperX blue and black rubber housing, the new DTU 3.0 gets the cool white housing. There will be no mistaking this one for another brand’s drive.

Our test sample of the DTU 3.0 is not only designed to hold up to 32GB of your precious data, it’s also tuned to be bootable and can even hold your apps if you choose to run them off it. This comes in handy if you need to boot a separate OS off the stick or launch apps that you don’t want to keep on the local drive. More impressive is that fact that with USB 3.0’s theoretical 5 Gbps of transfer speed, it actually has more bandwidth than the SATA2 standard and thus can be used as a app drive without a performance penalty. 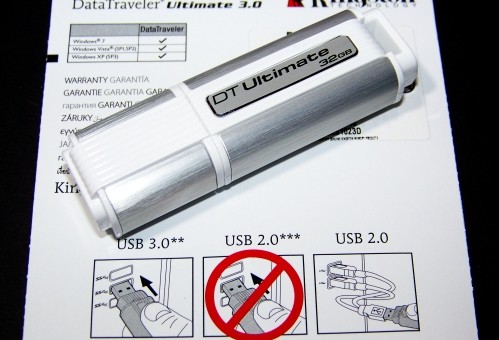 You obviously want to see how USB 3.0 performs in a powerful little flash drive, so we’re connecting it to a system that supports USB 3.0 devices. This is color coded by blue USB ports instead of black ones on most modern motherboards today. Let’s break down the test system:

Just in case you weren’t already aware, you do need to install the USB 3.0 driver that comes with your motherboard software disc before being able to take advantage of USB 3.0 on your supported motherboard. If you can’t find it, you can get the driver from your motherboard manufacturer’s website. Our board uses the NEC USB 3.0 chipset.

I decided to use some of my favorite USB 2.0 flash drives in this comparison. Drives were once considered the cream of the crop in flash drives.  Users expect the DTU 3.0 to be faster, so I tested these USB flash drives based on their intended purpose.

The latest Crystal Disk Mark was used to give us Sequential, 512K, and 4K data block transfer rates from both flash drives. I finished up with a timed data transfer exercise where a 1.92GB folder filed with 5MP photos and product videos was transferred to and from the flash drives.