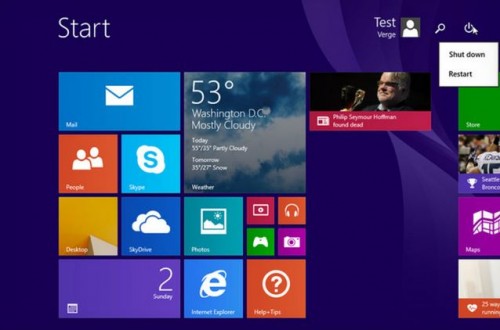 Microsoft hasn’t exactly had the best of luck with people adopting Windows 8, partly because it’s such a dramatic departure from Windows 7 and the many iterations before it. They’re working on making things better, particularly for those using a keyboard and mouse, with Windows 8.1 Update 1. This was schedule for release next month, but it looks like Microsoft has already let the proverbial cat out of the bag.

For a little while there, if you hopped on through the Windows Update service on your computer, you could find official download links to the finalized version of the newest Windows 8.1 update. This would also involve a series of patches, but then Update 1 (also dubbed the “Spring Update”) would become available for you to download. With the update, you get to see Windows 8 apps on the desktop taskbar and you can see the desktop taskbar on top of your Windows 8 apps too. We also get the buttons to minimize and close apps again, rather than being forced to use a gesture. As you can imagine, this update is geared mostly toward non-touch users.

The bad news is that Microsoft has since recognized its misstep and removed the direct download links to the updates. However, you can still find the full download mirrored on a variety of file sharing sites if you must have Windows 8.1 Update 1 right this instant. I’d recommend against it, though, as you never know with those file sharing sites and you’re only a month away from an official update through the more official Windows Update channels.