The single coolest thing about this digital picture frame is also one of its greatest disappointments. You see, you can use the Kaleido R7 to access real-time content from your Flickr account, Picasa account, or even RSS feeds. That’s a very neat feature and the content (not just pictures) can be streamed wirelessly over your network. The downside? Your paired PC has to be on and EyeStage has to be running.

Seeing how the Kaleido R7 has its own Wi-Fi radio, I don’t see why it couldn’t be loaded with a little piece of software to reach out and grab some Flickr content on its own. Instead, your PC has to work as a middle-man.

So How’s the Picture Quality 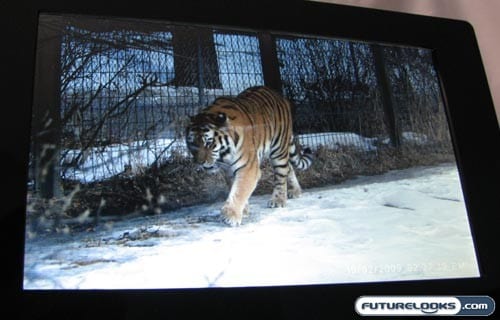 While the resolution (800 x 480 pixels) could be a little better, the picture quality on this digital picture frame is far from disappointing. The color reproduction is quite good for a digital photo frame and you get a reasonable level of crispness. This was true with wildlife photography, food pictures (with flash), and night landscapes.

I found that the contrast ratio left a little to be desired, since the darkest of the darks wasn’t quite dark enough, but this is understandable for a relatively affordable digital photo frame. You don’t really reach that kind of contrast ratio until you get to better LCD monitors and that’s just not going to happen with most photo frames. Similarly, horizontal viewing angles were acceptable, but vertical viewing angles weren’t quite as good. To overcome this, the frame offers 25-degrees of tilt.

Turning Things Up and Down

I have a tendency to take all of my photographs in landscape mode, because I expect to view all of my pictures on my computer. My computer monitor is always in landscape orientation, so it only makes sense that I take pictures framed that way. It’s sort of backwards-thinking, I suppose, because portrait-oriented photos make a lot more sense under certain conditions. 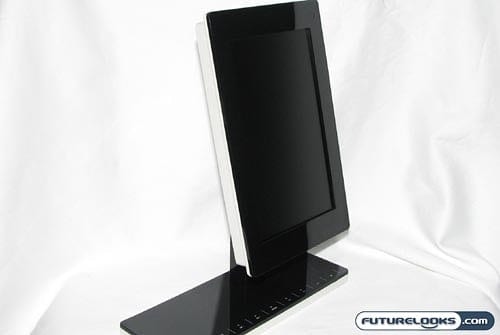 Do you take a fair number of portrait-oriented pictures? Isn’t it frustrating when you try to show those on a landscape-oriented picture frame? IPEVO has you covered, because the Kaleido R7 allows for 90-degree rotation and it has an orientation sensor to automatically adjust how the pictures are displayed. With other frames, you have to turn the device on end. With the Kaleido R7, the base stays in place and you simply rotate the display. This isn’t terribly innovative, but it’s very handy. 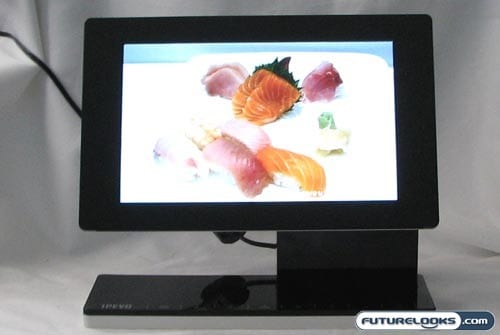 Listed at $199.99, the IPEVO Kaleido R7 isn’t exactly the cheapest digital photo frame on the block, but it’s also not quite like every other digital photo frame on the block either. I am a little disappointed that it only has a 7-inch WVGA display, since I would have liked to see something larger and something with a higher resolution, but there is certainly a place for the more compact size.

The picture quality is quite good and I’m a big fan of the overall aesthetic. The unique assymetrical design, placing the “stand” portion on the right side, adds a big dash of style and the great glossy finish adds a little touch of prestige. I would have preferred if the entire body was black to match, rather than having a white back.

The Wi-Fi connectivity could have been a real star here, since IPEVO is letting you access all sorts of online content. You can access your Flickr and RSS… but only via your computer using their software. If the frame could work as a standalone Internet picture-shower, that would really make it a stand-out product for me. As it stands, I’m left yearning for more.