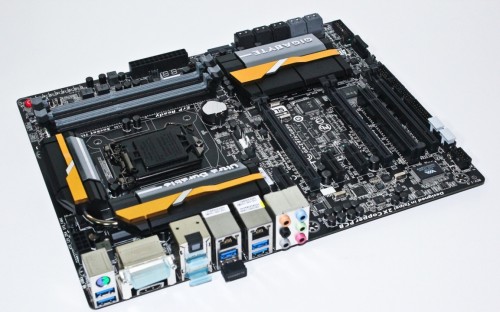 Right before the Z87 launch, we had an opportunity to sample the entire GIGABYTE line up including this motherboard. We saw first-hand the most important improvements to the series which includes new themes for the performance and new G1 Killer series. The GA-Z87X and H87 series all have different color heat sink accents but the overall PCB theme is the same. The UD5H sports a much more conservative gold on black theme. While it's very clean, it's just enough gold grab your attention. The red of the UD4H is actually quite nice as well.

Keeping pace with the competition, the UD5H supports 3000 MHz DDR3 memory if you can find some under an astronomical price. 16 Phase VREG accompanied by Ferrite Chokes and solid state caps ensure the CPU is well fed whether stock or overclocked. What you can't see on the surface is that GIGABYTE created a whole new UEFI BIOS from scratch. The 3D BIOS is gone and never to return, at least in its earlier form. The new interface is cleaner, customizable, and more detailed oriented as we'll see later in tests. 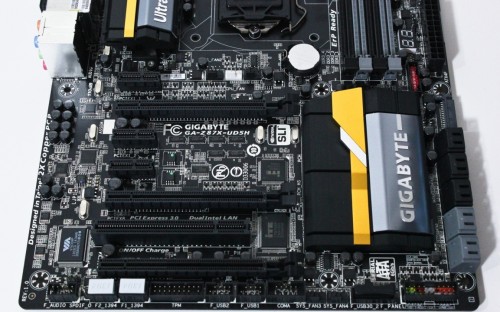 GIGABYTE also completely revamped Easy Tune and then created a new APP Center around it, addressing many of the criticisms that we've had about their software user experience in the past. The App Center will also automatically download and update programs that can be used to monitor and direct enhance system performance. Interestingly, there isn't a UD5H-WiFi model this time around. 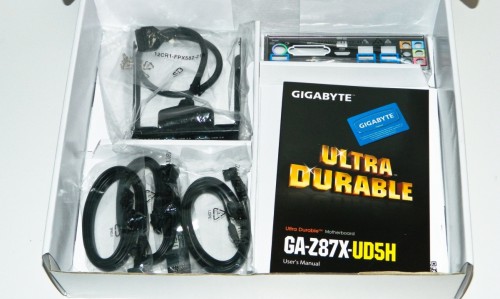 GIGABYTE helps users with extras inside the UD5H box since the board caters to a slightly more serious user. The bundle includes six black SATA cables, SLI/CrossFireX bridge, 3.5" USB 3.0 tray unit for extra connectivity, black padded IO shield, some stickers, manual and necessary software drivers DVD. The 3.5" USB 3.0 front panel will plug in to your motherboard's new standardized port but that means you won't be able to plug in your enclosure's cable if they use the same thing. This is meant to upgrade older cases of course as new enclosures all come standard with the USB 3.0 front panel connector.

MSI has changed from using common designs. When I opened the box, I was greeted by a jet black PCB and two-tone red on black heat sinks. The south bridge heat sink has a very cool crimson red dragon etched in to the anodized aluminum. The dragon theme is a great "gaming" design compared to the previous Z77 series boards. But what makes it gaming?

The MSI Z87-GD65 Gaming board sports an embedded E2200 Killer NIC from Bigfoot networks and Creative Labs Sound Blaster Cinema audio. For the most part, the Killer NIC does help balance the network during gaming and in some cases can improve latency. The Killer Network Manager software allows users to prioritize what games and programs in terms of bandwidth. Audio Boost is actually a shielded Realtek ALC1150 audio processor which uses emulation software to generate the Sound Blaster Cinema experience. The audio is also coupled with high quality audio capacitors, headphone amplifier, and OPA1625 which we hope offers extended, richer sound. This has elements very similar to what GIGABYTE has done previously in their G1.Killer series. 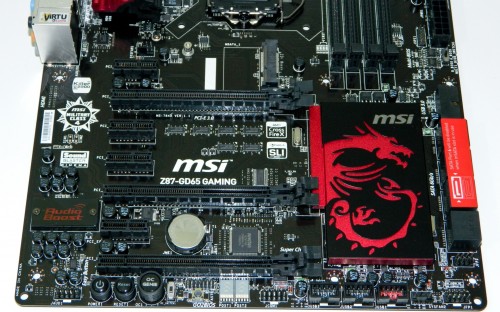 Finally, the Z87-GD65 Gaming continues offering OC Genie 4 overclocking for instant results. OC Genie 4 works in conjunction with the OC Switch that gives users the option of a standard Turbo Mode (3.5 to 4GHz) and Gaming Mode (3.5 to 4.2GHz). Simply choose your mode and press the Genie 4 button for an instant processor overclock to increase system response and in some cases increase frame rates by supporting lower end video cards. Additionally, the "Dragon" supports up to 3000 MHz DDR3 overclocking memory which will be interesting to test when more of the modules are available. The VREG design is 12 Phase and utilizes a few POSCAPs to fit the Military Class 4 design. 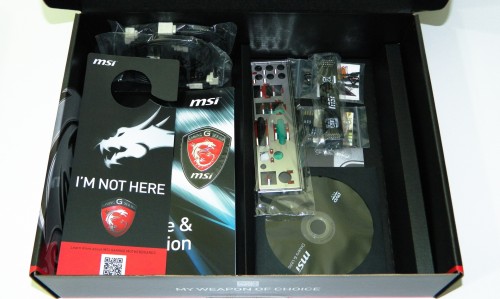 MSI gets creative by including a bundle with the gamer in mind. Along with the door tag (which is actually copied from the ASUS' ROG series from 2 years ago), users will find four black SATA cables, IO shield, front panel header plugs, wire leads for the voltage ports on the board near the DIMM slots, SLI/CrossFireX bridge, some cool moniker stickers, and the usual manuals and software DVD. Everything you need to get connected is inside.

Now that the candidates are announced and vetted, let's show off our standard testing setup for this round up and get to breaking down the performance of these front running Z87 motherboards!