It’s just about time to head back to the classrooms. With student loan money in hand, you’re ready to pull the trigger on a new Intel Core i5 or i7 4th Generation “Haswell” system. You may be staring at manufacturer websites and retailers looking at different Z87 motherboards, all promising to be the ideal platform. While each motherboard offers all kinds of connectivity, you have to ask, what are the important features besides how cool the board looks and ultimately, which one fits your budget? If appearance or which is cheapest is all that you care about, then chances are quite high that you’ll be sacrificing some very important things such quality and stability.

We took three competing Z87 motherboards currently available at different price levels and literally beat them silly in the lab for several weeks. We learned a great deal about each partner’s platform quirks, benefits, personalities, and the features each offers. The three motherboards in question are the ASUS Z87 Deluxe, GIGABYTE GA-Z87X-UD5H, and MSI Z87-GD65 Gaming. With the new Z87 chipset, each board has new learning curves, software, and some even have a completely redesigned UEFI BIOS. It’s time to see which one will get your money’s worth in our latest Z87 Motherboard Round Up! 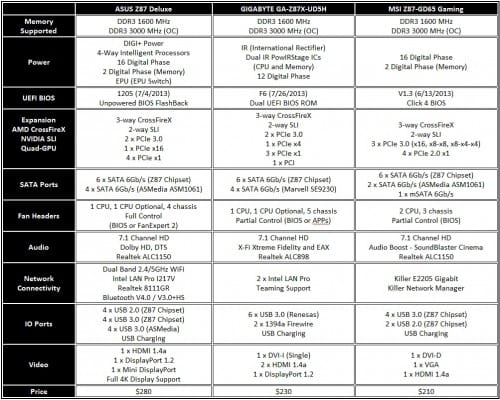 Here are the features and specs of the three boards in this round up from the top three leading manufacturers. Keep in mind that basic performance should always be standardized across any motherboard series. For example, ASUS’ entire Z87 channel series share the same UEFI BIOS and therefore will provide very similar base level CPU performance. However, not all boards overclock quite the same or have the same additional connectivity options. That said, these three boards should be able to maximize CPU performance regardless of specs. We’ll find out in testing after looking at the boards up close.

Here’s a quick peek at the extra physical tuning features that come in very handy with each motherboard. Each manufacturer has made specific component selections and do differ from one another. You’ve probably noticed that solid state caps are now standard, although not the same grades/types are used. Basically, there’s a thousand different ways to make a great motherboard. I just want to make sure you notice that manufacturers are putting some serious effort in to offering better quality motherboards today. 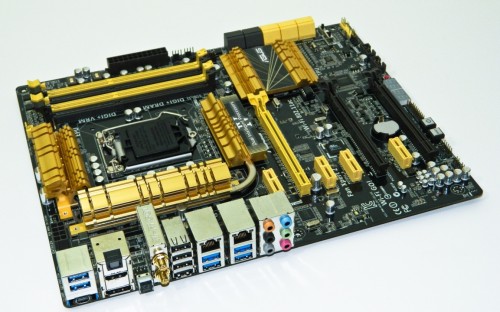 Straying from the safe and conventional design themes is the ASUS Z87 Deluxe. The channel series theme is now anodized gold on black, all the way down to their Z87 Mini ITX series. Some of the expansion slots are just a shade different but ASUS made a careful calculation in terms of what enthusiasts or mainstream users wanted in a board design. I’ve seen some immaculate system designs like the MurderBox shown off at LANcouver 2013 which proves there are plenty of possibilities.

Underneath ASUS’ gold standard is a platform packed with implementation improvements and useable features. ASUS’ 5X Protection focuses on Stable Power (DIGI+VRM) Control for system stability, Over-Current Protection against any component surges using Polyswitch fuses, ESD Guards in the form of ESD Protection ICs for discharging static from ports, use of 100% solid state caps rated to resist 105C heat for longevity, and a stainless steel I/O shield to ward off corrosion. 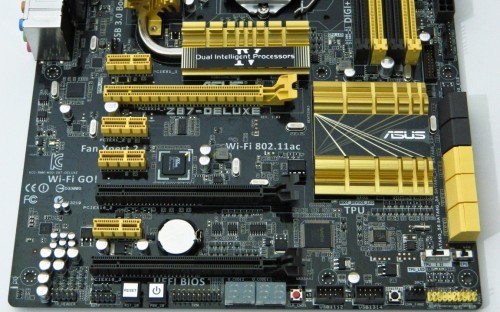 The Z87-Deluxe’s power and overclocking features include 16+2 Phase Digital Power to feed 4th Generation processors. DDR3 support is rated to 3000 MHz which is plenty and currently the upper max available. TPU control adds immediate 4.2GHz overclocking performance. The VREG is complimented by standard solid state caps (SSC) instead of POSCAPs. Electrically, SSC provide better power and longevity. BIOS Flashback allows a user to plug in a USB flash drive, press the BIOS button, and it automatically updates without the system powered up. (Sweet!)

Other key features include Direct Key which auto reboots you in to the UEFI BIOS, MemOK! which automatically configures your DDR3 such as if you have unmatched pairs for example, Fan Expert II for configuring and controlling your cases fans through the all in one AISuiteIII, and finally an integrated PLX controller to balance out expansion bus when needed. 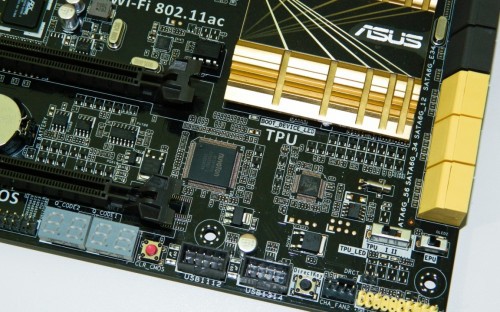 Direct Key is also supported by a DRCT 2pin header just above the button (bottom right). Enthusiasts can plug their enclosure’s 2pin Reset wire in to this header and boot directly to the BIOS. If you’re one to tweak to get the most out of your system, this is a very handy option. I suspect we may see enclosures offer an extra 2pin front panel wire for this purpose in the future. This is a very simple yet innovative feature. 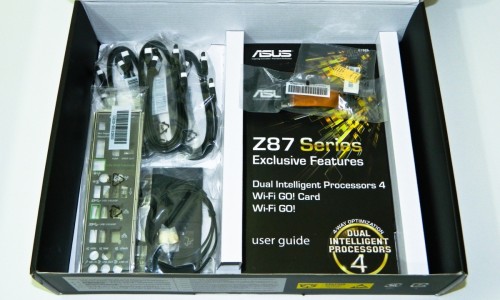 The Deluxe has you covered for quick and painless wireless set up. There are 6 black SATA cables (since it pretty much goes with everything), matching IO shield, Quick Connectors so you don’t have to feel around inside your case trying to connect the front panel wiring, SLI/CrossFireX bridge, and Wi-Fi GO 802.11ac card with dual antennae. The documentation is detailed and quite clear on how to set everything up right down to installing the software and drivers from the DVD.

Now let’s check out what ASUS’ arch nemesis, GIGABYTE, has come up with.