Search
Home
Reviews
Prev7 of 7Next 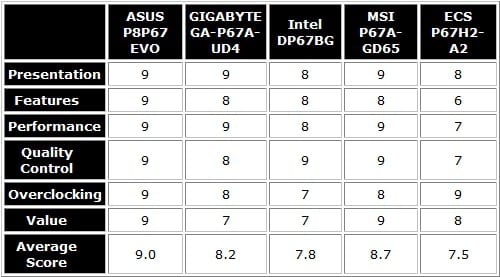 There can be some good and bad things about adopting any new platform, or technology for that matter. Even while the UEFI BIOS continues to mature, the P67 Sandy Bridge platforms are far, far more aggressive overclockers than previous generations reaching 4.1GHz right out of the box when just using software. We can’t stress enough that none of the motherboards ever presented any Cougar Point SATA issues what so ever even with weeks of thorough beatings. Even though we’re dealing with all new software, BIOS, and processors, our scoring method carries a seriously strict curve.

The ECS P67H2-A2 gave us a rough start, but came through at the very end offering surprising overclocking and respectable performance. It was unusually eager to rock 4.5GHz in part to Sandy Bridge’s strong engineering. However, our board didn’t quite make efficient use of Intel Turbo at all times evident in repeated Cinebench tests. It’s odd little AHCI glitch could probably be improved with another BIOS update. Until then, this platform will have be restarted in order  to detect new devices plugged in to SATA ports. The A2’s noise emissions won’t make many friends on the silent system integrator front. Standard gamers may not mind or notice the board noise above their performance hardware.

While the overall design and configuration is good, there needs to be a bit more quality control by engineers when it comes circuit implementation and BIOS. Clean this up a bit and the board would have bested some others.

In true GIGABYTE form, the GA-P67A-UD4 motherboard presents one of the cleanest layouts and designs to date. We were a little sad at first to see it without a flashy UEFI BIOS of its own, but the hybrid BIOS still works perfectly and can be updated in the future. Stability was great all around and performance was on par with the rest of the pack. Overclocking was good with minimal tweaking even with only 8 Phase VRM support. With more serious tweaking, it has the potential of being much higher overclocker. The motherboard bundle was disappointing as it offered the bare minimum compared to the others.

Ultimately, its very cool design theme and overclocking may limit the number of potential consumers who are looking for more features. It would be nice to see some new ones or tangible extra improvements to the Ultra Durable 3 platform.  Then, we would have something a lot more exciting to write home about.

Intel excels at producing super clean operating motherboards, but aren’t known for extreme overclocking. The DP67BG Barrage performs very nicely even surpassing the previous generation in that respect. It’s a very organized platform for those who are expecting high quality Intel performance right down to the power consumption. And, it’s one of few boards around to offer a Consumer Infrared feature. The back lit LED skull is one of their more creative trademarks lending something unique to its presentation. The Barrage was also the easiest of the round up to recover from overzealous BIOS settings.

Still, it would be nice to see some extra overclocking performance from under the hood as well as some new features that make the Extreme series stand out. We know that their engineers have both the experience and talent to produce a very strong motherboard. Therefore, we’re eager to see what they come up with later.

Arguably the most well balanced bang for buck platform goes to the MSI P67A-GD65 because of it’s polished features, bundle, and price. It was the least quirky of the platforms when working with the new BIOS and their software is superb for new and experienced users. OC Genie II continues to make it the easiest motherboard on the planet to overclock reaching 4.1GHz with a press of the button. It’s maximum overclocking potential seemed limited due in part to the BIOS limitations rather than hardware. We know the potential is there as we’ve seen it in action before.

We would like to see MSI make the choice to bring that same overclocking zeal to the masses. And, while the layout is very clean and still an attractive board, designers haven’t quite complimented the military class II with the right design. All in all, it’s a very strong and stable performer costing the least of the competition which makes it extremely appealing.

That brings us to the ASUS P8P67 EVO motherboard. It was the best performing board by just a few points at times and utterly left the rest in the dust at others. The EVO’s design is impressive and features are the most well rounded of the roundup providing impressive stability throughout testing. Both, the AI Suite II and the extremely detailed UEFI BIOS are great to use, but maybe not together. There are so many options between the two that it can get confusing especially enthusiasts new to the P67 series. Still, either of them alone are lean and very eager to transform the EVO in to something of a performance beast.

This is also the only motherboard that offers both JMicron and Marvell SATA3 support along with the standard P67 SATA2 support which deserves extra credit in light of the Cougar Point problem. This all easily overshadows any set up issues or software nuisances which have been recently fixed. Given the motivated number of BIOS updates actively offered, highest performance, great bundle, and technological features, we have to give the P8P67 EVO our coveted Editor’s Choice.

Love This Round Up? Hate It? Leave a Comment Below!