Search
Home
Reviews
Prev6 of 7Next

The objective here is to compare the motherboards’ audio performance a bit more objectively than with the human ear. Using the latest drivers, RMAA is pretty reliable when detecting poorly integrated audio processors. A pair of high quality headphones helped us confirm our results. All of the 24-bit codecs frequencies were tested. Below are the results. 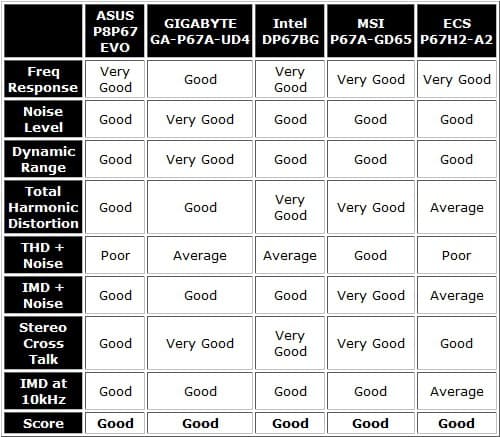 Each platform achieved a good rating. The Intel Barrage board offered the highest quality audio even to the naked ear. Unfortunately, RMAA did detect some THD (Total Harmonic Distortion). It was just ever so too high, otherwise it would have really secured the top spot. We’re glad to report that there was no stereo crosstalk nor could any odd irregularities be heard during music, game demos, and movies.

Most motherboards don’t have a lot of variation in this area since they use similar if not identical controllers, chipsets, and drivers. However, some boards have used PLX controllers which add performance and value. Crystal Disk Mark 100MB transfer tests were used to look for performance differences and SANDRA for network. Note, we’re using a Kingston Value+ SSD for SATA2 testing. 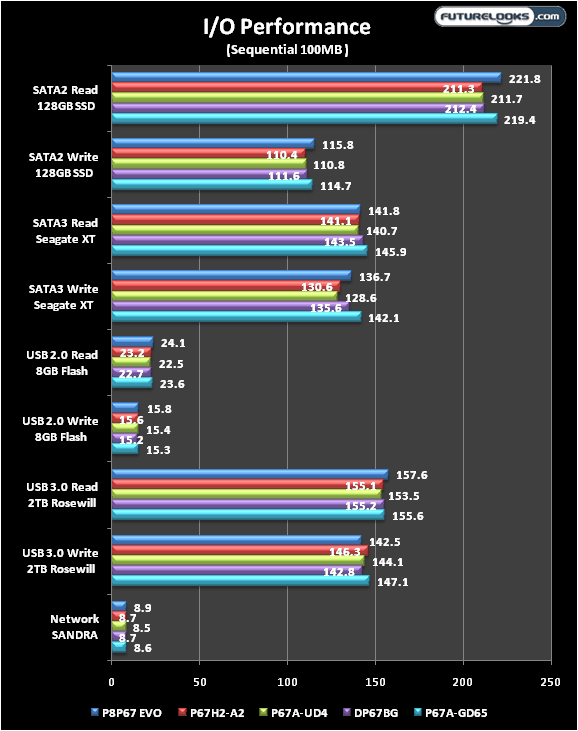 Looking at our round up, it was the EVO that offered the most flexible storage expansion with P67 Chipset, JMicron, and Marvell ports. That means you have extra ports if you currently have a recalled B2 stepping ASUS P67 motherboard with the black, dark blue, and light blue ports. The rest of the pack were comparable, but don’t offer the same general speeds. 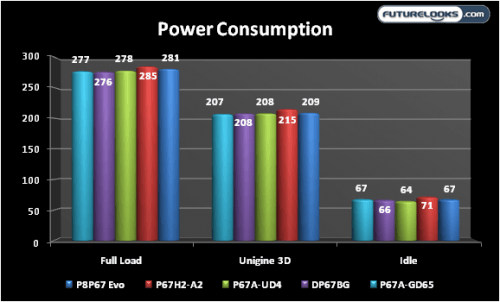 Consumption was similar between all the platforms. Only at load did we observe a larger difference no doubt to the more rich features on the EVO and A2. Realistically speaking, users won’t mind these numbers at all. They’re pretty darn low for quad core, multi-threaded, mainstream computer systems.

What we found was that the Barrage, EVO, and GD65 were very quiet and cool operating platforms. The UD4 presented a very faint, yet detectable high pitched sound emitting from the components around the CPU socket during high loads. The P67H2-A2 emitted the loudest noise which could be heard more than six feet away. This does speak to the overall component quality and its unfortunate that the ECS doesn’t shake it’s low quality roots.