When you think of NZXT. today, you think of the new Phantom Crafted Series Enclosure.  Since launching at COMPUTEX 2010, this case quickly became one of this year’s hottest computer cases. With it, NZXT. has enjoyed a new level of success and prestige. But before the Phantom, there were other signature cases that helped define what NZXT. is today. This article, originally published in 2006 by Futurelooks, takes a look back at the road to this iconic case.

NZXT Corporation was born two and a half years ago, fuelled with a passion to build unique and truly designer computer cases for the “computer gamer” market. Known as “Crafted Gaming Armour” their designs represented a gamer’s need for something unique in a world proliferated by regular “beige boxes” that sit under their desks.

Computer gamers are a different breed of computer user that not only buy the latest hardware to power demanding games, but they also care about what the box looks like that houses them. Many of the most extravagant custom computer case designs have come from gamers themselves and Johnny Hou, NZXT’s Lead Designer and Global Marketing and Product Marketing Manager is not only a gamer himself, but he can be credited with being one of the first to really push the envelope of design.

The Man Behind The Myth

Johnny was born in Taiwan; the hot spot of the computer industry. At the age of ten, Johnny and his family came to the U.S. so that he could fully develop his design skills, creativity, and free thought: Things that are not common in a typical Chinese culture. Through his upbringing, Johnny developed a unique understanding of both the North American market and the Asian market. As a result, Johnny Hou was the perfect weapon to help launch a young Taiwanese company into a competitive computer case market.

Even though Johnny is charged with developing products responsible for NZXT’s growing sales, his youthfulness has revealed some prejudice in the industry. Johnny admits that being called a “Lead Designer and Global Product and Marketing Manager” makes business go a bit smoother in an industry where age and seniority are part of the politics. “The title definitely does help, but regardless of what they think of me personally, they have to work with me in the end”. Although he’s been around for only twenty-three years, he has shown wisdom in letting the work he does speak for itself rather than allowing a few “ripe individuals” to rattle his mettle.

A Day In The Life…

Johnny typically starts his day at nine in the morning, but doesn’t often leave till at least seven in the evening. Yet he still finds time to have fun during the day. “I will always find at least one hour in my day to play games…” These long days involve meetings in several time zones, which is one of the reasons his days end up extended. However, Johnny knows that the career he has chosen is a lifestyle. “I find joy in my work so working long hours is not really a problem because I’m enjoying every bit of it”.

Designing computer cases and playing games may not sound like work, but this is just part of it. His responsibilities also include trying to convince manufacturers to buy into his designs, which can sometimes be a challenge. Johnny remembers a situation where he ran into a creative difference with a manufacturer. The manufacturer had presented Johnny with a piece of hardware that could “display messages and run temperature sensors”, but all Johnny wanted it to do was “control 7 little LEDs…so it’s got a Knight Rider feel…” In other words, all he wanted was a pulsing red light that resembled the one that was attached to the front of a wisecracking “Supercar” named K.I.T.T. belonging to David Hasselhoff. “The guy thought I was mad”, Johnny chuckles.

Changing the Industry One Case at a Time 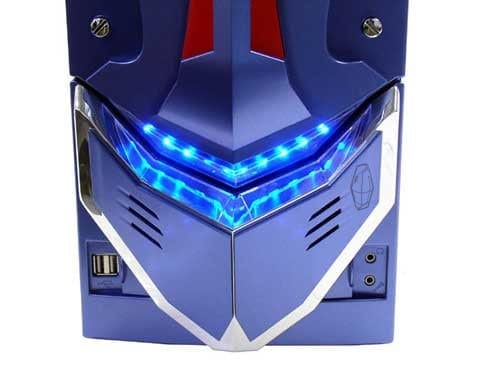 Wreaking havoc in the industry has paid off for NZXT. As a result, Johnny’s very first NZXT case known as “The Guardian” hit the market as the only mass marketed computer case to ever break the mould of a box with four sides. In fact, “The Guardian” had a three dimensional front panel that looked like the head of a great robot, and has often been called the “Optimus Prime” case referring to the 80’s cartoon show, the “Transformers”. “Every engineer that I’ve met dreads my designs. Nowadays there’s a bunch of shapes and forms but imagine the look on the engineer’s face when he got my design of the Guardian”, says Johnny with a smile.

One of the things that have given his cases a sort of “cult status” was Johnny’s signature on the back of every Guardian case’s front panel. Although it seems like one of those ego-driven designer things to do, Johnny insists that it’s really for his users. “This began with the Guardian, still the only existing model with a ‘Johnny H.’ signature on it. We wanted our customers to feel a close connection with us so we started doing this on every case”.