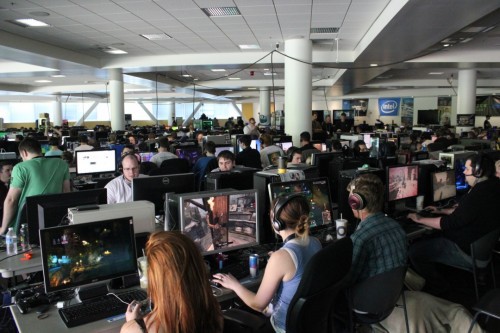 Jon Peddie Research just put out a press release stating how their research shows that the decline of the PC market was head off at the pass thanks to the dedication of gamers and enthusiasts around the world. That’s you guys by the way!

According to the press release, our enthusiast nature and our quest for more “Jiggahertz” (thanks Crazy Russian) has fueled the market for DIY components, likening our obsession to those of “sports car enthusiasts, always looking for more speed, power, utility, and handling”. Guilty as charged.

They also go on to say that much of the excitement is mainly anticipatory. As key titles are announced, our nature to upgrade kicks in. We tend to buy upgrades, such as discrete graphics cards, in anticipation of the launch of these games. The press release cites ARMA 3 from Bohemian Interactive as a potential catalyst, but we know that “Triple A” titles like Battlefield 4 will also be the thing that makes us open our wallets come this October 29th when it releases to the world. No matter how potentially buggy it might be or how bad Origin is compared to Steam. For what it’s worth, they have gotten a lot better.

I’m sure great events celebrating PC Gaming and DIY like LANcouver 2013 also have something to do with helping out the PC market too.

So to everyone that reads this site and calls themselves an enthusiast, builder or gamer, well done. You saved PC. The full press release with the big numbers is below.

TIBURON, CA – AUGUST 7, 2013 – In a challenged PC market one user group is standing firm against the winds of change blowing many casual computer users to the “good enough” mindset behind sales of tablets and cloud computing devices-PC gamers.

PC gamers continue to buy and build with a fervency that could be compared to motorcycle, 4X4, and sports car enthusiasts, always looking for more speed, power, utility, and handling.

Jon Peddie, President of JPR said “Not only is gaming becoming an even more important purchasing influence of PC sales due to the offloading of more basic functionality to smart devices, but we are forecasting growth in the most expensive discrete graphics products. We are also impressed with the embedded graphics offerings this generation and going forward.”

Ted Pollak, Senior Gaming Analyst at JPR said “The effect that key titles have on hardware sales is phenomenal. Enthusiast PC Gamers embrace content creation and modding, so when titles like Bohemia Interactive’s ARMA 3 are in the pipeline; we start to see anticipatory hardware sales. In fact, we are estimating over $800 million of PC builds influenced primarily by this title. A major component of this situation is that many games are placing increasing demands on the CPU. The result is that swapping out the graphics add-in board is not enough this time around and gamers are building (and ordering) overclocked PC’s from the ground up.”

JPR believes that PC’s have an advantage for casual gaming as X86 tablets expand the market, and new powerful CPUs with built-in graphics have opened the door to the living room. On the high end of the spectrum nothing can surpass PCs at this point in time because they can run ultra high resolution graphics better than any other platform. Because consoles have display restrictions and forgiving couch based control input, they just can’t compete with the PC’s precision and power.

The Worldwide PC Gaming Hardware Market report series by Jon Peddie Research which covers 33 countries, notebooks, desktops, DIY, and accessories, comes in three versions: Enthusiast, Performance, and Mainstream, with each version selling for $7,500 and the set of three for $15,000. In addition, with the set is a summary report of the Total PC Gaming Hardware Market worldwide.

Dr. Jon Peddie has been active in the graphics and multimedia fields for more than 30 years. Jon Peddie Research is a technically oriented multimedia and graphics research and consulting firm. Based in Tiburon, California, JPR provides consulting, research, and other specialized services to technology companies in a variety of fields including graphics development, multimedia for professional applications and consumer electronics, high-end computing, and Internet-access product development. Jon Peddie’s Market Watch is a quarterly report focused on the market activity of PC graphics controllers for notebook and desktop computing.