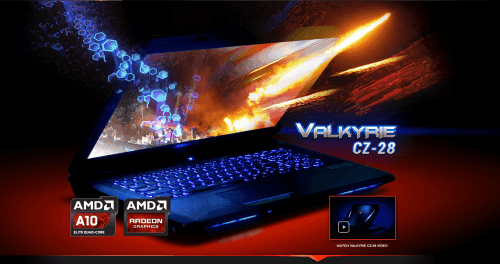 iBUYPOWER added the Revolt compact gaming powerhouse back at CES 2013. While that built was awesome, it was also a little on the pricier side of things which is always the case with Intel based systems. iBUYPOWER looks to now expand those options and offer a very reasonable entry-level system with the same Revolt case. In addition to this they are also launching a new series of Valkyrie gaming laptops with AMD A10 APUs.

I know as well as the next guy that AMD cannot realistically compete with Intel in clock for clock performance. I also know first hand how little that actually matters for gaming and daily use of a PC so I am very happy to see the iBUYPOWER Valkyrie with AMD A10 APUs up to the A10-6800K and up to an Radeon HD 8970M 2GB GDDR5 graphics card. These gaming laptops can also be equipped with an SSD and HDD for the best in capacity and speed. The best part is the entry price is much lower than its Intel based Valkyrie counterparts. 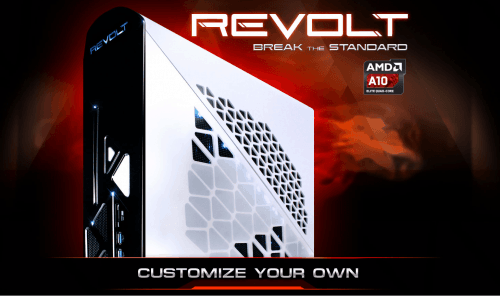 If a gaming laptop was not your cup-of-tea then iBUYPOWER still has you covered with the AMD A10 equipped Revolt. The perfect pairing of compact design, low power use, and high gaming performance. The AMD Revolt gives you more control over the price by starting as low as $499. AMD and iBUYPOWER are determined to bring you as many options as possible and save you money while they do it.

Check out the full press release below for more on these announcements.

AMD Strikes with Revolt and Valkyrie at iBUYPOWER

July 30, 2013, City of Industry, CA – iBUYPOWER and AMD are proud to announce that its two most sought after systems, the Valkyrie and the Revolt, are both now available in new powerful AMD flavors.

iBUYPOWER’s class-leading mobile gaming platform, the Valkyrie, is now available with AMD’s application shredding A10 quad-core CPU and comes equipped with Radeon HD 8970M graphics paired with 2GB of GDDR5 memory. Those looking for the most bang for the buck in a mobile gaming system that delivers unrivaled performance need not look any further.

Customers can configure the new AMD-based Valkyries with both a SSD and a HDD for the best of combination of speed and capacity.

We’ve also answered the call for those seeking to get their hands on our no compromise Revolt. We now feature Revolts configurable with both AMD and Intel CPUs. Available with up to an AMD A10-6800K quad-core CPU, the Revolt remains the industry’s leading benchmark in compact, high-performance gaming systems.

“At iBUYPOWER, one of our core strengths is being able to offer customers a wide selection of configurations for any of our systems,” said Darren Su, VP of iBUYPOWER. “Yes, we’re about producing the best performing systems, but we also want to answer the call for choice. With new Revolts and Valkyries featuring AMD components, we cater to our customer’s needs.”