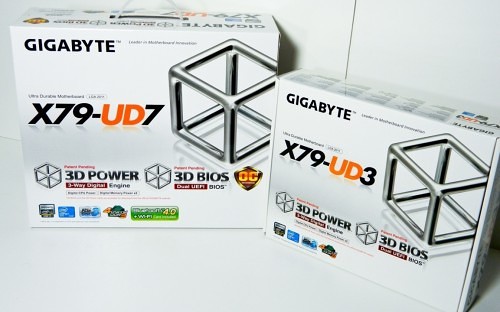 Adopting a new Intel processor usually means you are adopting a new chipset. This means a new motherboard and memory are also part of the deal. Since the X79 platform is the latest to power the Intel Sandy Bridge-E LGA2011 processors, that means upgrading can get costly pretty quickly. Especially if you’re on a budget. But there are also those looking for that special board puts their system into elite territory, and who are willing to pay a higher price for the best of the newest. That’s why we’ve decided to attack both ends of the spectrum with the help of GIGABYTE.

Today, we have two motherboards powered by the company’s new 3D Power Design and the Intel X79 chipset. The GA-X79-UD3 is aimed directly at offering the most expansion possible for cost conscious users while the GA-X79-UD7 is designed for enthusiasts looking for a platform that is anything but common, offering hardcore enthusiasts all the top features demanded in a motherboard. Let’s see how they compare to one another and how they do as representatives of Intel’s X79 platform.

The UD3 has been said to be the entry level consumer’s best friend for stepping in to the Sandy Bridge-E performance league. It’s quite possible given that it supports 4-Way NVIDIA SLI and AMD CrossFireX which is uncommon for an entry board. However, the rest of the integrated features are standard for keeping costs down including only four DIMM slots supporting up 32GB at 1600MHz max. Pricing starts at $249.99 US.

In the middle, the UD5 is targeted for users who don’t quite need emphasis on graphics but rather more aggressive tuning such as power users and overclockers. With 8 memory slots, it supports up to 64GB DDR3 at 1600MHz and up to 16GB at 2133 MHz frequencies in quad channel mode. This comes in handy for more pro level content creators. Users also get a couple extra eSATA IO ports on the back for external storage.

Otherwise, the rest of the board’s features are just like the UD3. Pricing starts at $349.99 at launch but can be found for about $299.99 US at most retailers. 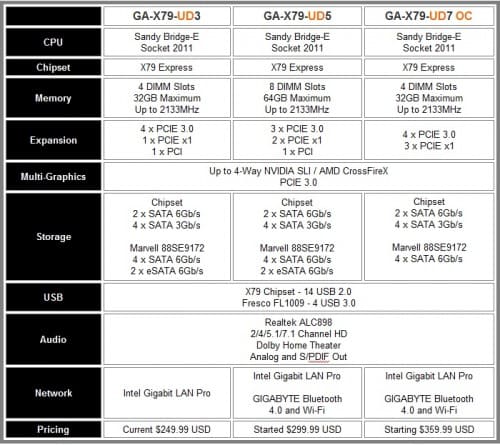 Taking a look at the third and final model of the mainstream desktop series, the UD7 flaunts an attractive orange on black theme including anodized heat sinks reminiscent of the legendary X58A-OC from the last generation Intel enthusiast platform. Essentially, the UD7 recipe includes the best features from the UD3 and UD5, but designers have also added some POScaps and PowerPAK MOSFETs to support the 16-phase OC-VRM, which give you up to 1,500 Watts of overclocking power. The board offers OC-Touch which includes real-time BCLK bus speed/multiplier buttons for extreme fine tuning and a rear automated OC button. The UD7 is of course priced higher at $359 US.

All but the UD3 model of GIGABYTE’s X79 series comes with a PCIE Bluetooth 4.0 and Wi-Fi card. It has two ring nut antennae which are best at ensuring overall signal strength and bandwidth for streaming media and gaming. They also share previous generation Smart 6, Easy Tune 6, @BIOS, 3D Power and 3D Touch BIOS in Windows software. You can find out more about the included GIGABYTE utilities in our extensive article on these extras as we’ll be concentrating more on the hardware experience in this review. 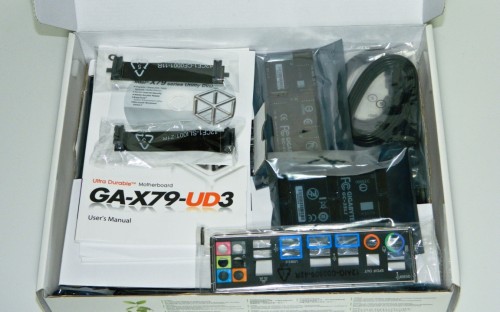 The GA-X79-UD3 is an entry level X79 board and comes with four SATA cables, two flexible NVIDIA/AMD bridges, 3-way and 4-way SLI PCB bridges, black IO shield, manuals and a drivers disc. The one thing the board doesn’t come with is the GIGABYTE Bluetooth 4.0 Wi-Fi card which is a shame. But that’s one of the reasons why you’d pay more for the UD5 version. 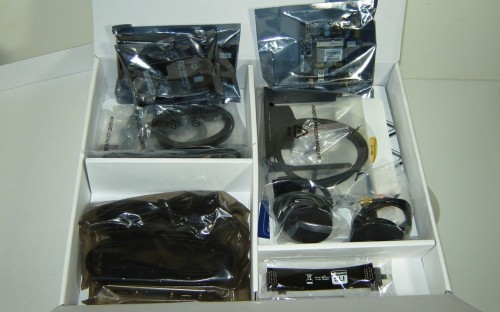 As for the GA-X79-UD7, it’s anything but entry level. It includes almost double everything in the UD3 bundle except for the 4-way graphics bridge. There’s also an extra 3.5″ USB 3.0 bracket and the Bluetooth 4.0 Wi-Fi card. Two stand alone antennae are meant to be used with the card for connectivity. The nice thing about the antenna is that they use ring-nuts to connect to the BT/WF card which makes for a better connection and signal for sustaining bandwidth. Rounding out the rest of the UD7 bundle are more manuals and the driver disc.

Unlike the X58A-OC edition board from last year, the X79-UD7 (OC) is a full featured ATX board. It’ll be given the same standard test consideration against the boards validated thus far and will also be tested for overclocking performance. The Kingsotn HyperX memory has had great success when checking each motherboard’s XMP accuracy. Here is the test bed layout.

Before we get into full on testing, let’s check out a few of the unique features of GIGABYTE’s new x79 series platform.