The World Cyber Games 2007 Grand Final in Seattle was both depressing and eye opening all at the same time.  It reminded us that at some point in our lives, we’ve all tried to convince ourselves (and our parents) that playing video games was a viable career choice.  While most of us decided to grow up, get a job and move out of our parent’s basements, some lucky buggers get to travel around the world and compete in video game tournaments for prize money and glory. 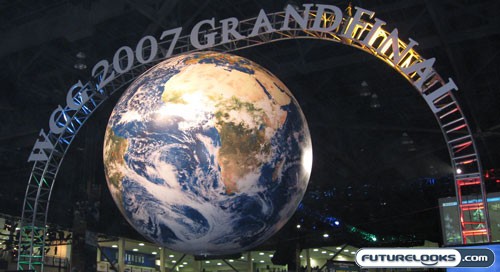 The World Cyber Games originated in Seoul, Korea and was originally known as the WCG Challenge way back in 2000.  168,000 players were whittled down to 174 players from 17 countries for the grand final showdown.  They competed in Quake III, FIFA 2000, Age of Empires II, and StarCraft Broodwar for a prize pot of $200,000 US dollars (when it was worth something).

Fast forward to 2007 at Seattle’s Grand Final last week, which ran from the 4th to 7th of October. Over 700 gamers came from a field of over 1.25 million gamers from over 74 countries to compete for 2.7 million dollars in cash and prizes. The players qualify from a series of regional and online tournaments to win enough points to secure their place at this presitigiou tournament. The list of games that competitors battled on this season to get here included:

In 2003, Xbox gamers got their chance to join in on the action and this year gamers did battle on Project Gotham Racing 3, Gears of War, Dear or Alive 4 and Tony Hawk’s Project 8.  I bet dollars to donuts that next year we’ll see Halo 3 replacing Gears of War.

As a World Cyber Games Rookie observer, not only have I never been to an event like this, but I expected this event to be like any other big time Lan Party or at least as big as events like Fragapalooza.  I was totally off the mark.  With international attendance, visiting government dignitaries and live entertainment and indoor fireworks, the event played out more like a cross between a WWE Main Event and a scaled down version of the Olympic opening cereomonies.

A “Cyber-Athelete” was selected from each of the 74 nations to be a flag bearer. I still can’t get over that moniker. I mean, I play games, and I don’t consider it to be athletic in any sense. I guess if Golf gets to be a sport, then we can call games Cyber-Atheletes!

Each nation’s flag was displayed on the huge screen as each flag bearer was announced by an MC and marched out one by one accompanied by some very dramatic “Flag Bearing” music. Some of the gamers that looked like they’ve never seen light outside of the glow of a monitor seemed completely frightened while other revelled in the opportunity to represent themselves and their nation at the games. After some entertainment and speeches by visiting dignitaries like the Lieutenant-Governor of Washington State, fireworks went off to announce the start of the World Cyber Games 2007 Grand Final.