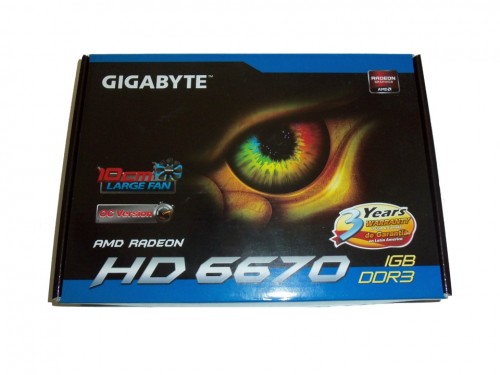 One of my favorite things to do when building a PC for others is to squeeze as much power as I can in the smallest package. The AMD APU chips have made this a joy since building ITX sized HTPCs capable of gaming on a decent level only involves a good cooler. While the AMD APUs are very impressive when it comes to graphical capability, sometimes you just need the muscle of a dedicated graphics card. When HTPCs and small form factor computers need that muscle, especially if it’s an AMD A75 motherboard you’re using, the GIGABYTE HD 6670 OC 1GB may be just what you need. 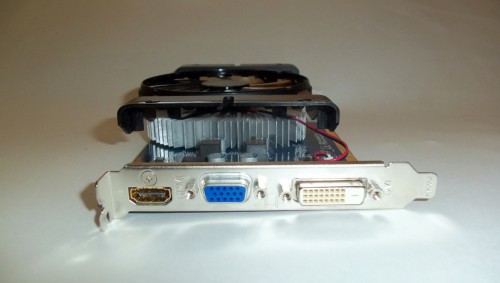 The GIGABYTE HD 6670 OC is factory overclocked from the standard 800/800 MHz (core/memory) speed to 820/900 MHz. As the card is built with DDR3 memory the 100 MHz boost in memory is the most important. If you recall from my APU review, memory speed for graphics cards in this performance segment makes the difference. The GIGABYTE HD 6670 has a very robust two slot cooling solution. This is helpful when using it for a quiet PC builds as the fan will often never make enough noise to notice.

As with many graphics cards in this price range and size, the order of the day is to provide an upgrade over integrated graphics processors. In addition to this, GIGABYTE also decided to ensure a variety of connections with 1 gold plated HDMI, 1 DVI, and 1 VGA connection. Often, entry level GPUs and motherboards will leave one of these off.

The GIGABYTE HD 6670 OC retails for $94.99 US at most retailers, but recent rebates may have it selling for less. We spotted it for $74.99 after rebate from NewEgg. 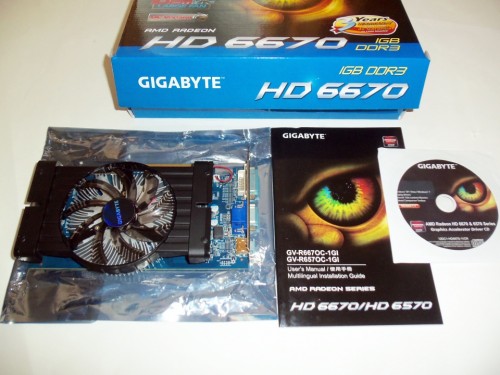 The first think you should note about any AMD HD 6670 is there expected use is to accompany an AMD APU or usage as an upgrade from an IGP. As such you will not find anything in the way of accessories.

The GIGABYTE HD 6670 as stated above already has one of each of the three major monitor connectors. There really is no need to include any adapters. Even without an adapter, the card can still support two monitors using the DVI and HDMI connections.  While an AMD HD 6670 does not support CrossfireX via external connection cable, it does support it via the PCIe bus with any APU. This means you will also not find any Crossfire bridge cables either.

The installation of the GIGABYTE HD 6670 OC was very easy as there are no PCIe power connectors. Thus the installation is the standard fair of pressing the card firmly into the PCI express slot and securing it with a single back panel screw or quick release if your case has one.

Even though this is a single slot card, it actually requires two slots to fit. This is important to remember when considering it for very small cases, or PCs with other installed expansion cards like a TV tuner. The GIGABYTE HD 6670 is a very short card though so depth is not so much an issue. While not the best option for ITX sized cases, it should be a nice fit for mini-ATX cases, or shorter box style micro-ATX cases.

Our test system setup is as folllows…

Now that we’ve established the testing parameters including software and hardware, let’s see what GIGABYTE’s HD 6670 OC 1GB can do!

Overclocking this card was very simple using only the AMD Catalyst Control Center. This was made possible by the cooler GIGABYTE used as well as the Hynix memory chips. The default overclock for this card is 820 MHz for the core and 900 Mhz (1800 MHz effective) for the DDR3 memory. I was able to push the memory to the limit CCC would allow of 1080 MHz (2160 MHz effective) and the core up to 880 MHz.

While I did attempt to run the GIGABYTE HD 6670 1GB at the maximum core speed CCC would allow of 900 MHz, I was not able to keep the card stable. Increasing the voltage to the PCIe bus proved to be ineffective as I do not believe the card was using all the power available at stock PCIe voltage. Cooling was also not to blame as even at 880 MHz I was only able to bring the core temperature up to AMD’s normal operational range. We will discuss this in detail soon enough, so lets dive right into the testing.

We will start with a synthetic test using 3DMark11 to gauge what we should expect as far as performance goes. Throughout these test I will be comparing the GIGABYTE HD 6670 OC to the AMD A8-3850 APU on its own plus what is added in terms of performance when run in CrossfireX. 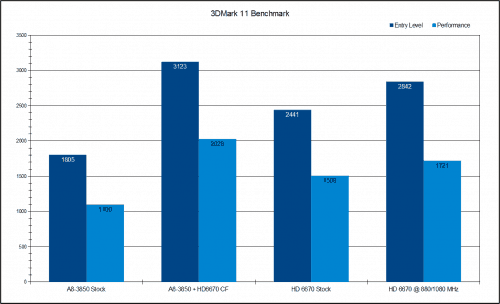 While CrossfireX is obviously going to be the best possible solution when available, there are some games and situations that will not support this feature. Alone the GIGABYTE HD 6670 gives a very health increase in performance over the A8-3850 IGP, the HD 6550. Keep in mind the A8-3850 has the most powerful IGP available today and it falls well behind the HD 6670 even at its stock settings.