We will now look at the results of the OpenGL synthetic testing. This test is just as important as 3DMark11 since there are a variety of games and programs that run using OpenGL instead of the DirectX. 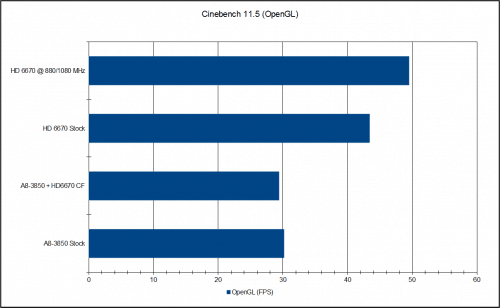 Note that OpenGL is not supported by CrossfireX. As such there is a very minor performance loss with CrossfireX. The HD 6670 on the other had provides a 32% performance increase at stock and 62.6% at 880/1080 MHz. If you are using a OpenGL program or playing any OpenGL based games, be sure to disable CrossfireX and let the HD 6670 handle the workload.

This time we will do some testing across DirectX 9, DirectX 10, and DirectX 11 using two different games. The first is Resident Evil 5 which was testing at standard settings (all high with VSync disabled and no Motion Blur) at a resolution of 1920 x 1080 using the “Variable Benchmark”. This ensures that the game is being testing as close to real world as possible.

Alien Vs. Predator was testing at its standard settings at the same resolution. This means the textures were at medium, shadows on high, all DX11 features enabled, no AA, and AF at 16. 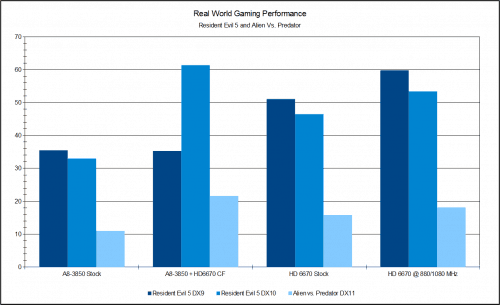 While the HD 6670 supports DX11, it struggles with performance when all of the DX11 features are enabled. I am sure with some minor tweaks such as bringing down the Antistropic Filtering and using medium shadows could help performance; however, you would get much better results simply running games like this in DX10 mode using Crossfire.

While CrossfireX with the A8-3850 + HD 6670 gives great results in DX10 mode, it struggles with DX9. Once again note that these results were from the originally released drivers and you may see better results with AMD 11.11 Catalyst drivers as of now. Even without CrossfireX, the HD 6670 gives more than playable results at stock clocks and even better once overclocked further falling just shy of a 60 FPS average. While a slightly older title, I think Resident Evil is a good representation of most game engines with few exceptions.

Now we are going to look at a current game using a heavily modified version of an older game engine which is very common practice in games. These test were done at the system recommended settings of Ultra. Yes I was just as surprised Ultra Settings were recommended and I do not believe using Ultra is a good idea. I also attempted to follow the exact same path and perform the same tasks in game using FRAPS over the course of 10 minutes of gameplay. 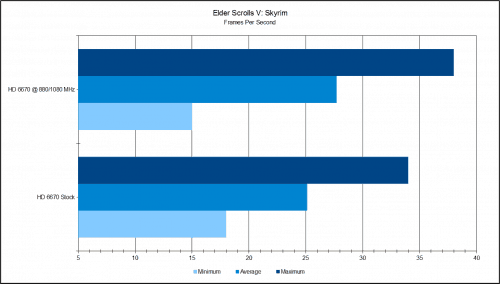 You can see that the overclock does provide an average of 11.88% performance improvement at maximum frame rate and average frame rate, but suffers a loss at minimum. Gameplay did feel sluggish, but not enough to be annoying. I believe at High or Medium settings the HD 6670 could easily be playable in the low 50’s in FPS.

I ensured combat was involved in all test runs, but I was attacked in the same location by different things each run. This is the nature of the game and real world testing so I place more stock in the average frame rate here. The drop in minimum frame rate is literally the difference between being attacked by a group of 3 Orc raiders and 5 Nord bandits. It would seem any increase in the number of NPCs only affected the minimum frame rate as the average and maximum remained uniform (12% and 11.76% respectively).

The final piece to the puzzle here is the temperature of this card during idle and during heavy workloads. These results only relate to the GIGABYTE HD 6670 OC temperature. These test were done in the BitFenix Outlaw (review coming soon) with no additional fans and one extra expansion slot cover removed. 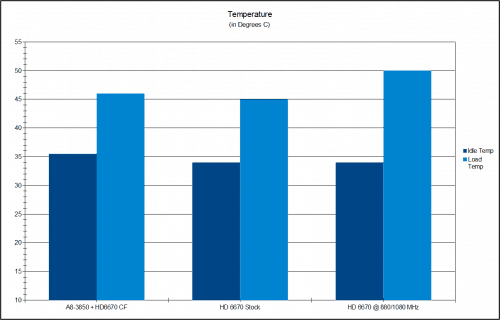 These temperatures are actually quite amazing. The normal operational temperature for an AMD 6000 series GPU is between 45 °C and 72 ºC. It is also stated these chips can rise to as high as 90 ºC without damage. Even when overclocked 60 MHz above the factor overclock of 820 MHz, the temperature of the core is only 50 °C with the fan speed maxing out at 45%. I believe this card is capable of operating with the fan removed completely for a silent build, although the fan on the GIGABYTE HD 6670 is not even as loud as the single case fan on the BitFenix.

When taking Hybrid Graphics with an APU out of the equation, one major weakness is the price. Going up just one notch up to an AMD HD 6750 or nvidia GT 440 can give you nearly twice the power for right at $100. While CrossfireX with an A8-3850 and a GIGABYTE HD 6670 can give you close to the same performance as a HD 6750, it is not as reliable due to driver and game support issues. Keep in mind though that the AMD HD 6750 and Nvidia GT 440 are louder, hotter, and more power hungry GPU solutions overall.

The HD 6670 was built to have a hard life as it is the defining line between what GPUs are entry level and which ones are mid-range. While this would normal leave a card in a bad position, the GIGABYTE HD 6670 OC does enough extra to pull itself out of the shadows. When you consider Hybrid CrossfireX, the ease of overclocking further, low temperatures, low noise, and low power use, it quickly becomes the only GPU upgrade option for an AMD APU system. And with triple monitor support onboard, it also has a great life as a productivity booster when coupled with three displays.

While the MSRP is $94.99, you can easily find this card with rebates, on sale, or paired with an APU for around $20 cheaper. At $74.99, it is a very attractive upgrade option for your small form factor PC or HTPC and of course, your A75 platform when mated to an AMD APU.