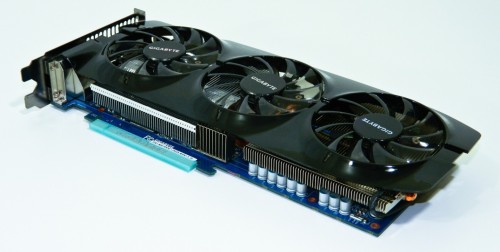 Long story short, here’s the break down of the test system using some of the latest components available. You can assemble your own or visit some of our friends like CyberPower PC, IBuyPower, and Puget Systems if you’d like something similar professionally built.

Since this is all about modern graphics performance, I’m only using DirectX11 video benchmarks: Batman Arkham City, Aliens vs Predator, Battlefield 3, Metro 2033, Unigine Heaven, 3DMark7, and MSI Kombustor (for cooling performance evaluation). Screen resolution is 1920 x 1080 throughout. Let’s get to work! 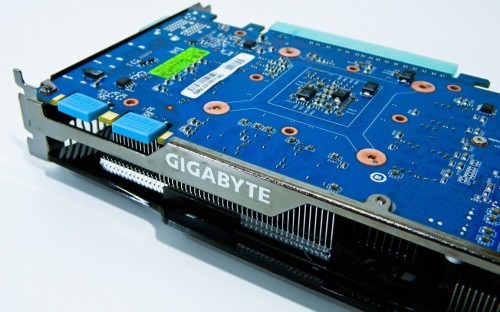 I’m using an ASUS VG278H 1080p 3D Vision 2 monitor bundle which I’ve previously reviewed. In my opinion, it provides simply the best there is in 3D gaming monitors at the moment. Regular 2D benchmarks were performed first. Then , we move on to 3D Vision 2 performance testing, allowing for generational comparison since the new GPUs are suppose to be very 3D friendly in terms of frame rate. All game settings were maxed where possible. 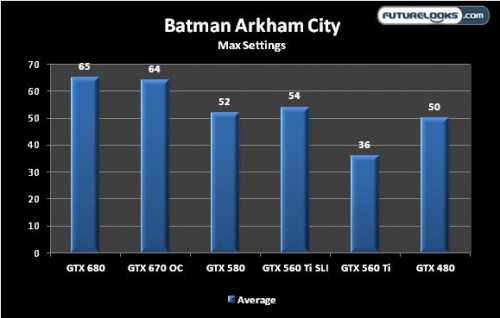 These cards are all PhysX friendly. Running max settings and PhysX, the game looks fantastic and plays extremely smoothly on NVIDIA’s second in command single GPU solution. As you can see, the GTX 670 OC was merely one frame less. The GPU core frequency adds up to a lot of power and video data sent to the system. On to some more eye candy. 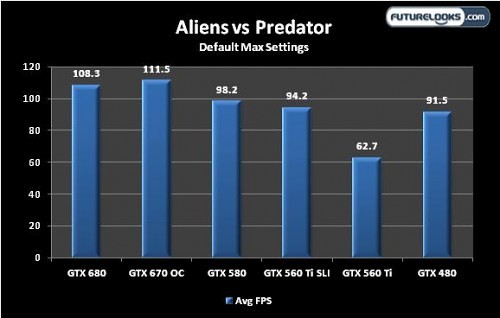 The AVP benchmark isn’t the most intensive, but it’s quite similar to many regular DirectX11 games and should point us in the right direction of what to expect. On the average, the GTX 670 OC just seemed to out pace the GTX 680 vanilla. Keep in mind they both have the same GPU core frequency thanks to the overclock, but do keep in mind, NVIDIA’s “GPU Boost” technology is a bit more aggressive than the GTx 680 clock for clock, on the GTX 670 and the effect of this is shown here. 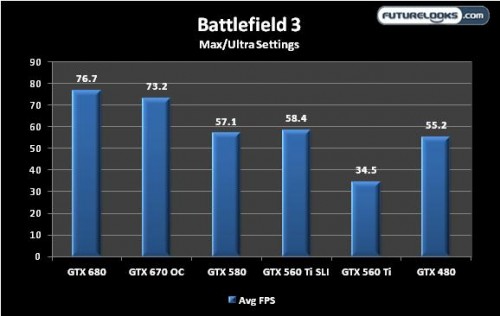 Now, BF3 will slap your graphics card silly using crazy detailed settings. Despite the game’s special affliction of graphical oddities, the frame rates were consistently in favor of GPUs with larger memory capacity and higher frequencies. Still, three frames is well worth the sacrifice for a $100 US cheaper GTX 670 OC card over your standard vanilla bone stock GTX 680. Especially with the aforementioned GPU boost being slightly more in the GTX 670s favour. 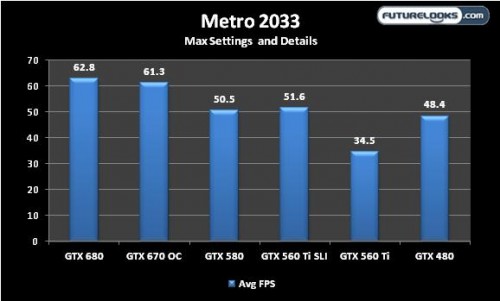 With Metro 2033 finally finishing spitting the cards out, the GTX 680 and GTX 670 OC were separated by about one frame. While not shown, if you relax the details to the default settings, the average frames jump up another 15 pretty easily making the game very capable of fluid play. It’s a tough race so far against the GTX 680 and the GTX 670 OC from GIGABYTE is clearly doing well. 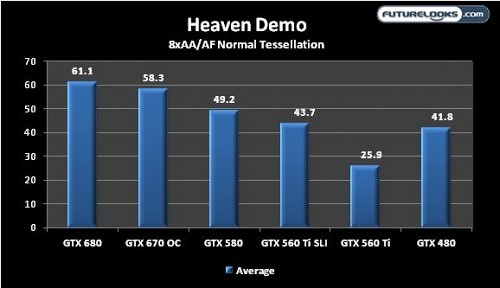 Yes, Unigine Heaven 2.5 demo will also make any video card work hard. It’s so accurate a benchmark, that it shows the effect of frequency variances between all the cards just a bit better than other benches. The GTX 670 OC scores within three frames of the top end single GPU GTX 680. Again, that’s pretty impressive for a $399 to bring it to a $499 card like that.

Let’s look at some final benchmarks including its cooling performance and take it home!