NVIDIA has finally completed their Kepler line up which means there is a GPU based on their latest architecture at every price point. The GTX 650 Ti was the final piece that finishes off the series at an entry level friendly price point of $149 US and is designed to work well at 1080p HD resolutions with moderate setting. Because of its small size and lower power consumption, it also seems to be a good fit for an HTPC when paired with a good Mini-ITX chassis. Join us as we’ve zoomed in the camera so you can have a closer look at the NVIDIA GTX 650 Ti.

The GTX 650 Ti has a lot to promise gamers at the meager starting price of $149 US. And with the inclusion of Assassins Creed 3 at launch, $149 suddenly became a much smaller pill. Let’s dive into more of the specifications.

What’s so different about the GTX 650 Ti? For one, the fact that this is the smallest gaming video card we’ve ever seen. Otherwise, the technical magic happens underneath the hood which can’t been seen. Below you can see how the GTX 650 Ti compares to its closest siblings. 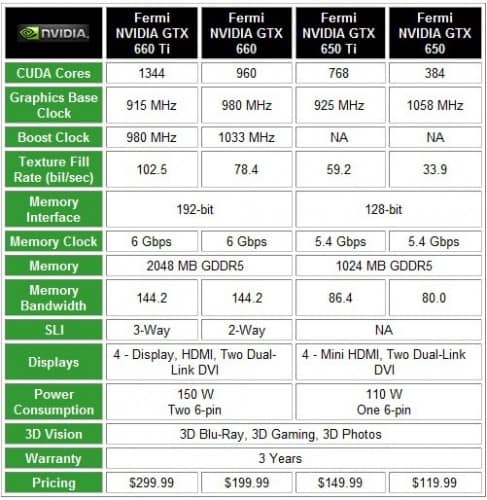 The major technical differences are the video memory, memory interface, lack of GPU Boost, SLI and of course, fewer CUDA cores. Again, this is an entry level GPU but it still sports a 925 MHz base clock to help make sure it can maximize its resources. Considering the power consumption, it’s possible to build a little 220 Watt home theater PC that can do a lot more than just play videos. NVIDIA promises 1080p gaming with this GPU and we’re going to find out how close they got to that goal.

Zooming in on the NVIDIA GTX 650 Ti 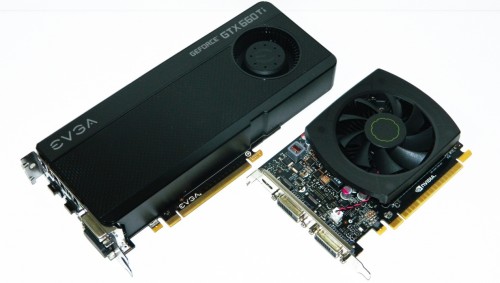 If you look carefully at the photo, you can just see the GTX 650 Ti amongst the giants. I didn’t think anything could be made smaller than the GTX 660/660 Ti, this is the shortest PCB ever. The word is that the GPU consumes so little voltage that the card doesn’t really need a fan per say. So it’s no surprise that there are passively cooled GTX 650/650 Ti in the works. 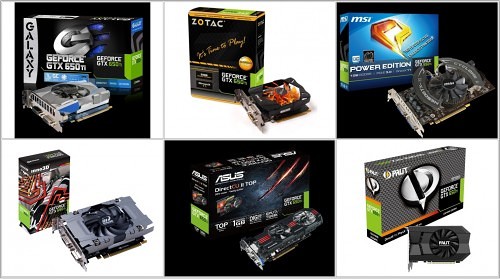 Here’s a sneak peek at some of the various GTX 650 Ti available from the partners. Note that everyone of them sport after market GPU coolers. Some of them are attractive and others are possibly an acquired taste. Also, most of these will clock in higher than the reference NVIDIA cards and some even have full sized PCBs to accommodate up to 2GBs of VRAM and voltage control for increased stability when overclocked.

Pricing for these cards start around $149.99 on up to $179.99 depending on the overclock frequencies out of the box and memory onboard.