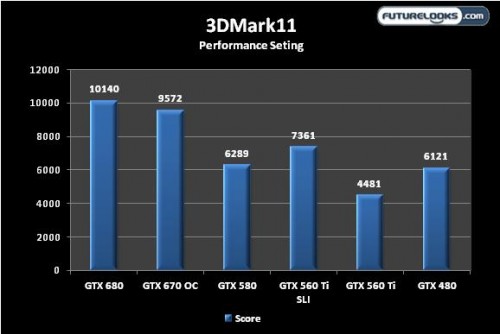 And, finally, 3DMark11 shows exactly what overclocked GPU and tuning can do for results, and gives us a good overall validation of what we’ve seen here today. The GTX 680 has just a few more CUDA cores and faster base clock which the benchmark puts to better use. If you’re looking for maximum CUDA processing power for Folding or other CUDA enabled apps, the GTX 680 is your prized fighter. However, if you want to save $100, and gaming is where your heart lies, then the GTX 670 OC won’t be far behind at all. 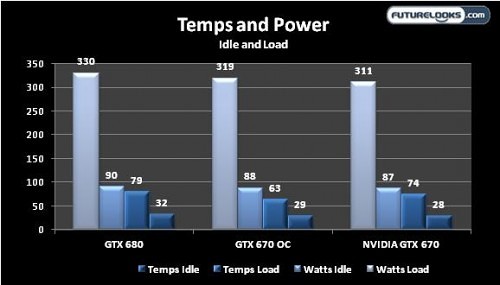 The GIGABYTE GTX 670 OC GPU cooler works quite well keeping things quiet and cool. It’s about as silent as can be at idle producing about 11dB noise over ambient. It was difficult locating any fan noise as most of the lab hardware drowns out the card. But, perhaps even more impressive is that the card is especially quiet when gaming, creating about 15dB without any extra air flow applied. Artificial stress testing got the fans up to 17dB which is not at all offensive to the ears. In fact, the card is undetectable inside any of the lab computer enclosures.

Desktop idle temps were pretty much level at 29C. However, whether running benchmarks or MSI Kombustor stress testing, the GPU never topped 63C. The card’s PCB still gets a little warm during operation but it’s to be expected. As for the design of the cooler, it’s definitely doing a great job and expelling warm air internally really doesn’t matter as long as your computer enclosure has reasonable air flow. Of course, the more air the better for any high performance gaming system. 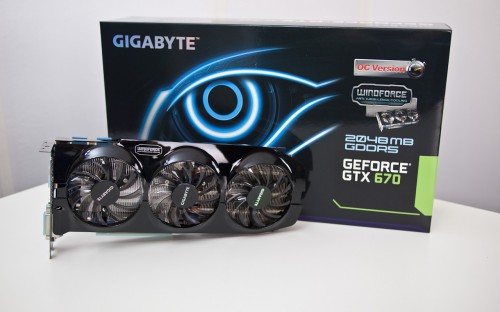 What can I say that you haven’t already figured out? In a very short sentence, the GIGABYTE GV-N670OC-2GD (GTX 670 OC) video card is quite fast.

In the 1080p tests, the card keeps up with the NVIDIA GTX 680 reference card and only falls just behind on the more serious DX11 titles. What you will also notice is that resolutions higher than 1080p will favor the faster GTX 680 though not by much at all. Gamers can expect about five to eight frames less on the average as you go higher. Still, two GIGABYTE GTX 670 OC cards will definitely give you 3D surround worth flaunting at your next gaming get together. 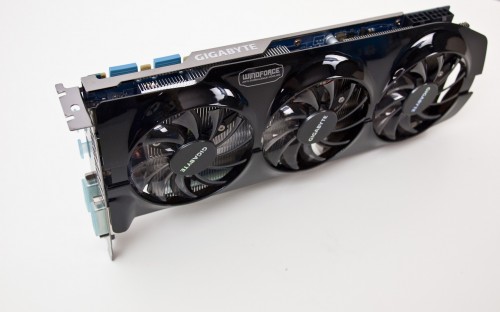 The cooler’s heat pipe design managed temps so well, the fans never had a reason to ramp. While I didn’t include the results, I did swap out the factory thermal paste for AC5 which helped cool things off a couple degrees more. Either way, the card’s cooling is exemplary and like many factory installed coolers, after market past applied properly, can improve things a little more if you take the extra time to apply it.

In terms of value, the GIGABTE GTX 670 OC (GV-N670OC-2GD) video card provides enthusiasts, but especially gamers, great value. It’s overclocked to 1085MHz and the card can be purchased at $399 which is the same price as most all reference design GTX 670 video cards. Unless you want an extra frame or two or bragging rights, there’s really no need to take it any further.

At the end of the day, my professional advice is to skip all other GTX 670s and go straight for this GIGABYTE. It won’t cost you any more than anything else, but performs much better, cools better, and if gaming is your thing, it’ll save you at least $100 over the higher end reference GTX 680. Definitely high performance and definitely recommended today. The only thing that holds us back from throwing down an Editors’ Choice is NVIDIA’s upcoming GTX 660 Ti. But if GIGABYTE can swing for the fences like it did with this GPU, then we might have some additional accolades to shower upon them later.