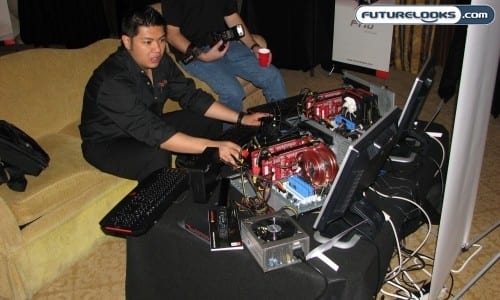 We had the honor of sitting down with Thermaltake at CES 2010 to go over some new things coming in the next couple months. Well, it was more like standing since we had to keep up with their ever so creative Marketing Jedi. For Thermaltake, there were three important product areas they were focusing on for 2010. That would be SuperSpeed USB 3.0, 80Plus Gold Certified Power Supplies, and some new computer enclosures.

Naturally, USB 3.0 is at the forefront of some of the newest technologies. One of the demonstrations in the TT suite was USB 3.0 versus USB 2.0 performance. It was the BlacX taking on the BlacX SuperSpeed (SS) transferring sequential files and random files. Sequential, or large single files, favor the SS by default. But, it’s the Random, fragmented large files that show us why USB 3.0 will quickly become the new standard.

If you’re tired of waiting for your USB 2.0 storage backups to complete the transfers, you have to get one of these. Your SATAII drives will definitely act like new drives. You can expect the new external USB 3.0 supporting BlacX EX docking station and Max5 AC Enclosures to arrive in a few weeks. 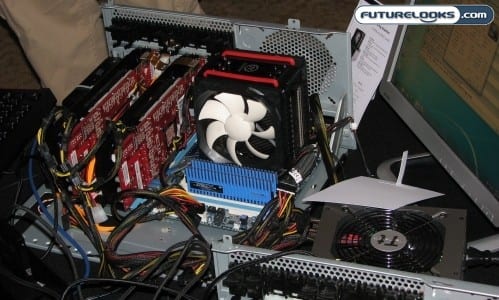 Thermaltake likes to keep things simple. They have CPU coolers for the regular users and some for the crazy overclockers like myself. The SpinQ VT looks more like a seriously cool weapon rather than a cooler. Who says they have to look conventional, or boring to get the job done.

The Frio battled it out on the test bench against one of Zalman’s CNPA9900 coolers. Both identical test systems were overclocking the processor to 4.4GHz (a very nice well rounded air cooled overclock) and put through some torture tests. Eventually, the surprisingly loud 9900 cooler blue screened (as the suite attendees let out a haunting “oh!”) due to the increasing temps while the Frio carried on ever so quietly.

Six new models are coming: Element V, Element V NVidia Edition, V3 Black Edition, V5 Black Edition, and Element Q Mini-ITX. Many of these are already available in the channels where as some of them need another few weeks. 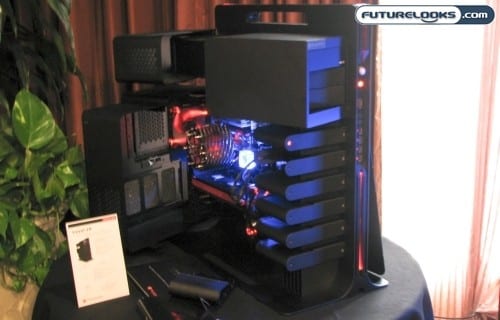 This wasn’t new, but we had to talk about it and everyone should know about the BMW engineered Level 10 computer case by now. Each one is assembled by techs and hand tested before shipping off to all the giddy retailers just jazzing to show one off. Given the economy’s slow rise, you’d think there wasn’t a market for it. But, the orders have been coming in revealing things are on the up. Apparently, not everyone was as careless as GM. 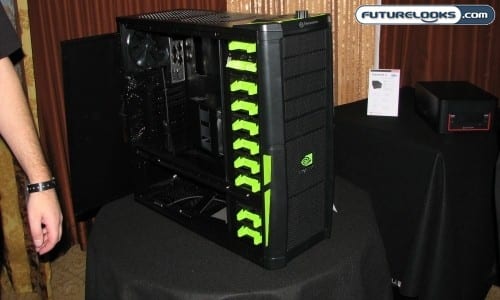 The V and Element series aren’t brand new, but the revised chassis updates should keep things lively. The Element V NVidia Edition was rather sharp, yet modest looking. There’s something darn cool about an all black interior.