Our performance testing was completed with 3DMark11 and Unigine Heaven 3.0 demos. If you don’t have one or more of the DX11 games in the small list, Unigine Heaven 3.0 is a great free benchmark tool to gauge your graphics performance as is 3DMark11. It’ll give you some sense of how much of an upgrade this card will be before you spend your hard earned money, both for the hardware, and for the games you’ll want to play. 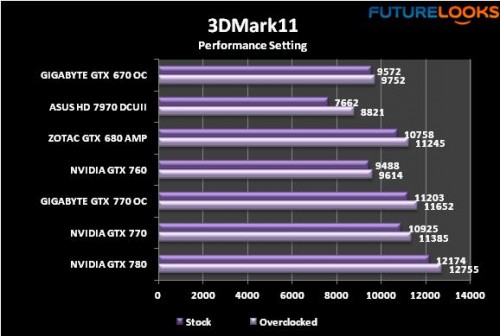 Overall, 3DMark11 scores mirror the real world scores for the most part with the overclocked GIGABYTE GTX 770 OC coming in slightly ahead of the non overclocked variant, and beating yesterday’s top card, the GTX 680. 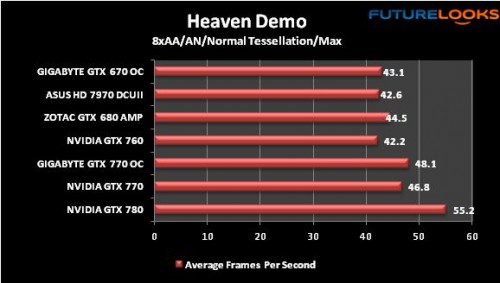 This free to download 3D benchmark is my favorite tool for comparing GPU performance. Keep in mind that higher bit rate memory support helps play a role in performance. The OC sports a very strong bit rate and larger GDDR5 to help bring the final average to 48.1 frames per second.

WindForce 3X – One Heat Sink to Cool Them All

The graphics magic happens underneath the WindForce 3X GPU cooler which utilizes the 3x80mm fans along with six heat pipes running the length of the video card to cool the Kepler GPU in each one of its glorious forms right up to 450 Watts of TDP. There are two benefits gained by using such a formidable heat sink. One, it means the GPU stays cooler which often translates in to faster, more efficient GPU Boost clock performance. And, two, the fans don’t have to spin so fast thus the card produces much less noise than other cards. 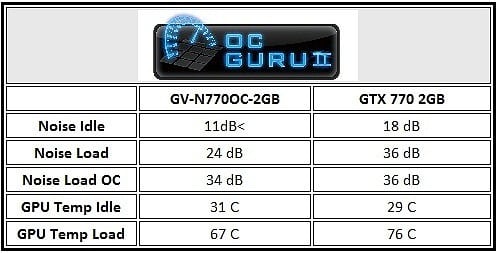 You can see how well the WindForce 3X cools and just how quietly it operates. I had to estimate the 11dB< as the lab monitor is at least 13dB and I can hear it over the video card. Full load wasn’t offensive to my ears at all. However, as expected, overclocking produced more fan noise as the temperature approached 80C. The card has a programmed algorithm that steps up the fan speed as the heat increases.

High quality, high performance video cards require a healthy amount of power. The NVIDIA GTX 770 GPU is rated to consume no more than 230 Watts at full load. However, the GIGABYTE GTX 770 OC 2GB consumed 210 Watts when under full 3D load but I had at least two monitors connected at the time. I’m sure I could create an artificial situation to see if I can get it to 230 Watts but that wouldn’t be realistic. Users can expect consumption to increase the more displays connected. 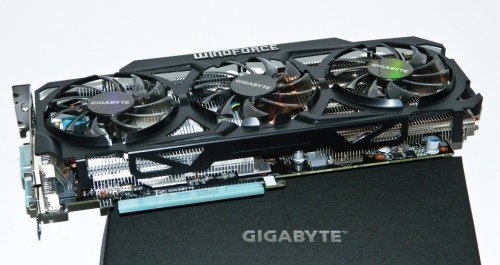 Three great characteristics that the GIGABYTE GTX 770 OC 2GB video card delivers are good graphics performance, great overclocking (through OC Guru II), and very good WindForce 3X thermal management. Surprisingly, the card even remains relatively cool and quiet no matter what you’re doing which is a very big plus for high end systems. Subjectively speaking, the all black PCB and WindForce 3X theme have really improved the graphics series’ appearance. That said, I can’t help but imagine the possibilities of a G1 Killer GPU series, should one exist some day.

If you’re a high end gamer needing a lasting upgrade at a reasonable budget, I highly recommend the OC 2GB as it will more than suffice. If you’re a high end multitasking gamer with more than two monitors, the OC 4GB will put your concerns to rest easily. But if you can afford the extra cash, the 4GB version today, may pay dividends when higher quality texture games surface in the near future.

Though not the highest overclocked, the GIGABYTE GTX 770 2GB OC Windforce definitely didn’t let us down in our testing an comes highly recommended.

The GV-N770OC-2GB OC can be found for as low as $369.59 US while the GV-N770OC-4GB OC is sold for as low as $449.99 US. Given the pricing of most stock clocked cards, either of the GIGABYTE versions are a comparatively good buy packed with extra performance. And compared to other overclocked cards by different manufacturers, GIGABYTE has some solid entries to an often saturated market.